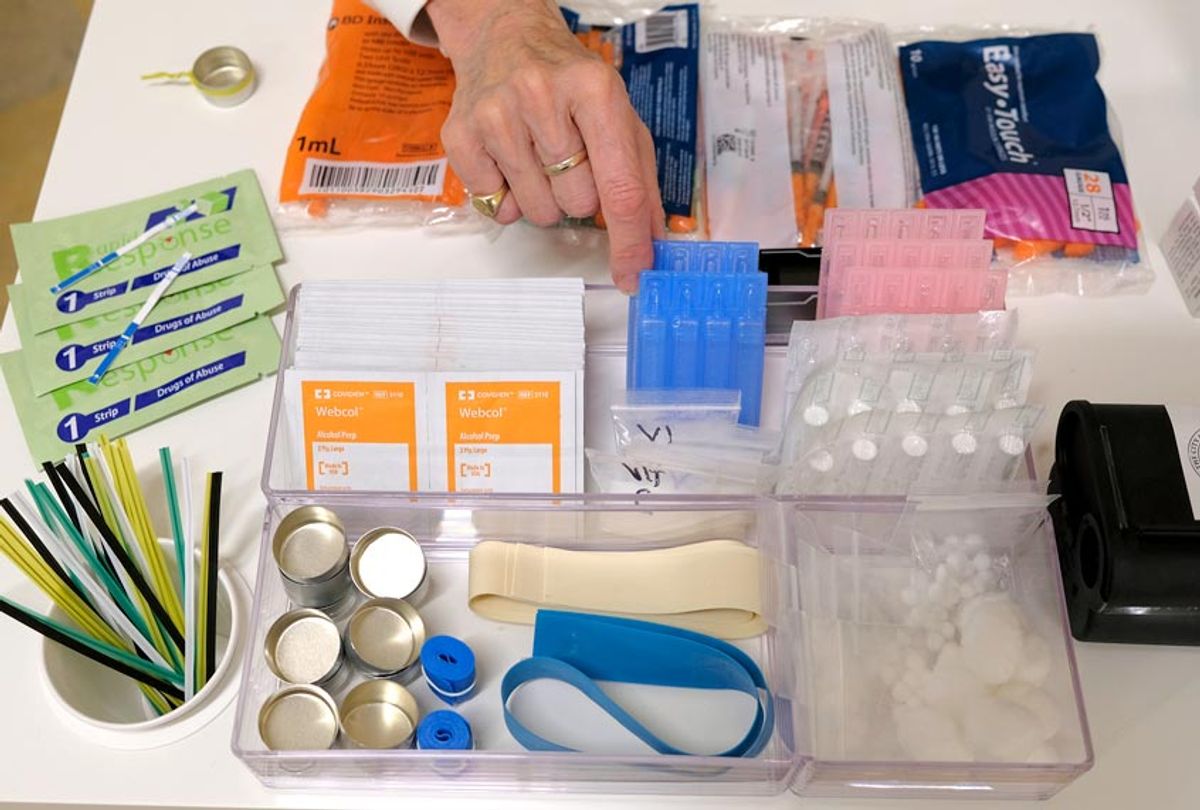 Supplies on a check in desk at Safer Inside, a realistic model of a safe injection site in San Francisco. (AP/Eric Risber)
--

The history of HIV/AIDS is a case study in what happens when inequality, exclusion and stigma against specific groups of people is privileged over promoting the health and well-being of every human being.

From the sensational and homophobic coverage of the disease first named the “Gay-Related Immune Deficiency (GRID)” and with warnings about the four “Hs” — Haitians, Hemophiliacs, Heroin Users and Homosexual – the government’s response has been more about judging the people who suffer than addressing their suffering.

Among those who have been hardest hit by HIV are people who inject drugs who remain among the most stigmatized groups in the U.S. That stigmatization has contributed to countless illnesses and deaths. Other groups who are particularly at risk are gay and bisexual men, transgender women and sex workers. Their vulnerability is not inherent in their identities, but rather in their being treated as less than human.

To put it simply: laws, policies and practices that undermine the inherent dignity of people and promote discrimination are driving HIV infections. Since epidemiologists first identified the virus causing the disease, we have known how to protect people from infection.  First, ensure that everyone has meaningful access to information about how the virus is transmitted. Second, teach people what measures they can take to prevent transmission by whichever route(s) is (are) relevant to how they live their lives. Third, empower them to take the measures necessary to protect themselves. Four, make it clear that no member of our communities is expendable.

For example, early on the government identified the risks to health care professionals.  Once researchers identified this risk, people who administered hospitals, clinics and medical offices took action. They assessed risks, provided education about universal precautions and invested in appropriate gear to prevent exposure.  In the case of a significant exposure despite the preventive measures, health care workers receive HIV Post-Exposure Prophylaxis (PEP).  As a result, there are very few cases of health care workers becoming HIV positive due to workplace exposure in the U.S.

Contrast this with people who inject drugs. Recreational drug use is illegal in the U.S. People who use drugs recreationally or as a form of self-medication, particularly those from black and brown communities, live in the crosshairs of the police.  We could choose to provide education and offer the means to prevent transmission such as syringe access programs, safe consumption facilities and shifting the government’s response to drug use away from the police and toward the health and well-being of people who use drugs. But more than 35 years after the epidemic exploded in the U.S. and despite more than 600,000 deaths, the U.S. government has refused to promote, adopt and fund these life-saving practices.

As a result, there are nearly 50,000 new cases of HIV infection in the U.S. each year. Many of those who become infected live at the intersection of multiple forms of stigma and exclusion: people who inject drugs, gay and bisexual men, people of color, transgender women and sex workers. Our government’s policies and practices send a clear message: unlike health care professionals, the lives of these people are expendable.

In the case of transgender people, the Trump administration is making every effort to deny their existence and erase crucial information that empowers trans people. Good public health practice focus on identifying at risk groups, building trust and promoting their well-being. Erasure does the opposite.

The tragedy of HIV/AIDS is not our inability to prevent the disease and saves lives, it is the tragedy of not caring enough about some people to saves their lives.