Every president since George H.W. Bush has had no previous foreign policy experience and here's why it matters 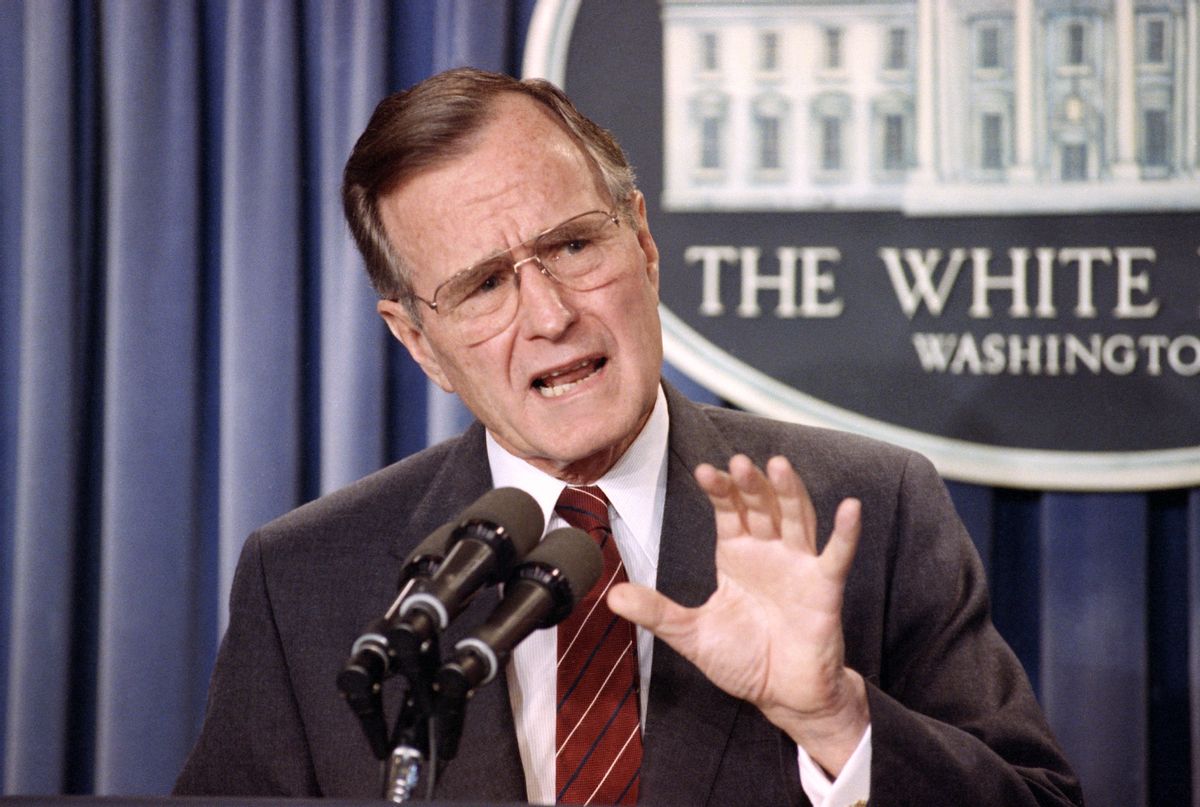 George H.W. Bush was the last person elected president of the United States with any prior foreign policy experience.

Bush, who has died at age 94, entered office with one of the most impressive resumes of any president, having served as director of the Central Intelligence Agency, ambassador to the United Nations and Ronald Reagan’s vice president.

He left office with an impressive list of achievements, including managing the peaceful collapse of the Soviet Union and the unification of Germany. But a major high point of his presidency was also the harbinger of disappointments to come: the swift military victory that reversed Saddam Hussein’s invasion of Kuwait and seemed to herald a new era in world affairs – but left Saddam Hussein in power.

In 1991, it seemed America could do anything it wanted to in the world. Twenty-seven years after Bush left Saddam Hussein in power, United States forces are still engaged in Iraq, and the US is far less confident of its global role.

A month after Iraq’s invasion of Kuwait, in September 1990, Bush and Soviet leader Mikhail Gorbachev issued a joint statement noting that “no peaceful international order is possible if larger states can devour their smaller neighbors.” That same month, Bush declared, “We’re now in sight of a United Nations that performs as envisioned by its founders.”

The problem was that while the United Nations was set up to prevent powerful states from invading weaker neighbors, as Germany and Japan had done in the 1930s and 1940s, the main challenges of the post-Cold War world – prior to Russia invading Ukraine in 2014 – were different. They were mainly internal challenges: failed states and civil wars in places like Somalia, Rwanda, Balkans, Afghanistan and eventually Iraq after the disastrous U.S. occupation following the 2003 war.

The U.S. effort to put together an international coalition against Iraq in 1990 was stunning. Secretary of State James Baker met with every head of state or foreign minister whose country held a seat on the U.N. Security Council. That meant not just meeting with those countries that had permanent seats like the Soviet Union and China, but also those holding rotating seats such as Ivory Coast, Romania and even Cuba.

Baker’s efforts were successful. The Security Council passed U.N. resolution 678 on Nov. 29, 1990 and established Jan. 15, 1991 as the deadline for Iraq to withdraw its troops from Kuwait or face a U.S.-led international coalition to force its withdrawal.

The coalition made good on the threat. As Colin Powell told my co-author Derek Chollet and me in an interview for our book on the period, “The Gulf War was the war against the Russians we didn’t have. There were no trees and no hills, but that’s what we were trained to fight. The Iraqis sat there and we kicked the shit out of them.”

For those who had suffered through the morass of Vietnam and the crisis of American confidence that followed, it was the ultimate feel-good moment. An estimated 800,000 people packed the National Mall to cheer their military heroes. Bush came out of the war with a 90 percent public approval rating.

And yet, the following year, a candidate with no foreign policy experience who had avoided military service in Vietnam won the presidency. He defeated the incumbent president who was himself a war hero and had led the Gulf War coalition to such success. By 1992, the Cold War was over, and Bill Clinton campaigned with the mindset that it was “the economy, stupid.”

But while Clinton defeated Bush, he inherited the Iraq problem from his predecessor, who had chosen not to remove Saddam Hussein in order to keep his U.N. coalition together. Clinton was faced for eight years with patrolling the no-fly-zones established over the north and south of Iraq to protect the Kurdish and Shiite populations.

Clinton passed the Iraq problem off to George W. Bush, who in the aftermath of the attacks of Sept. 11 went to war in 2003 – this time without U.N. authorization. Bush and his “coalition of the willing” removed Saddam Hussein, leaving the United States as an occupying power. And while Barack Obama promised – a promise on which, for a fleeting moment, he seemed to deliver – a U.S. withdrawal from the country, he was forced to go back in militarily with the rise of the Islamic State, handing off the Iraq problem to his successor to manage.

Thus the promise of the Gulf War – the U.S. dominant like no other since ancient Rome, confident that it could rule the world on behalf of freedom and democracy – gave way over time to doubt and confusion. In the post-Cold War world, the U.S. military was largely called upon to handle internal conflicts – in Somalia, Bosnia, Kosovo, Afghanistan, Libya and, throughout it all, Iraq – and the results have proved deeply dissatisfying.

In 1991, George H.W. Bush declared victory and celebrated with a parade. In 2011, there was no parade for Libya. There will be no parade for Afghanistan. Stability in Iraq remains elusive – the US could not celebrate a clear-cut military victory there.

It’s fitting that George H.W. Bush, World War II military hero and Cold War veteran, was the last president to preside over what at the time felt awesome: a major military victory fought on behalf of the entire world against a dictator. Instead, his successors, none of whom served in the military and all of whom have wrestled with post-Cold War challenges, have been vexed not only by Iraq, but by challenges posed by nonstate actors while trying to manage regional threats emanating from China, Russia and Iran. While Bill Clinton, George W. Bush, Barack Obama and now Donald Trump have each in their own way tried to define American leadership, George H.W. Bush’s presidency represents the moment at the end of the Cold War when anything seemed possible for the United States in world affairs, and the underlying challenges were only just beginning to become visible.