Yale Psychiatrist Bandy Lee on Donald Trump: "His disorder is on display for the world to see"

Waiting for 2020 is "reckless in its lack of understanding of the present danger the president poses," Lee argues 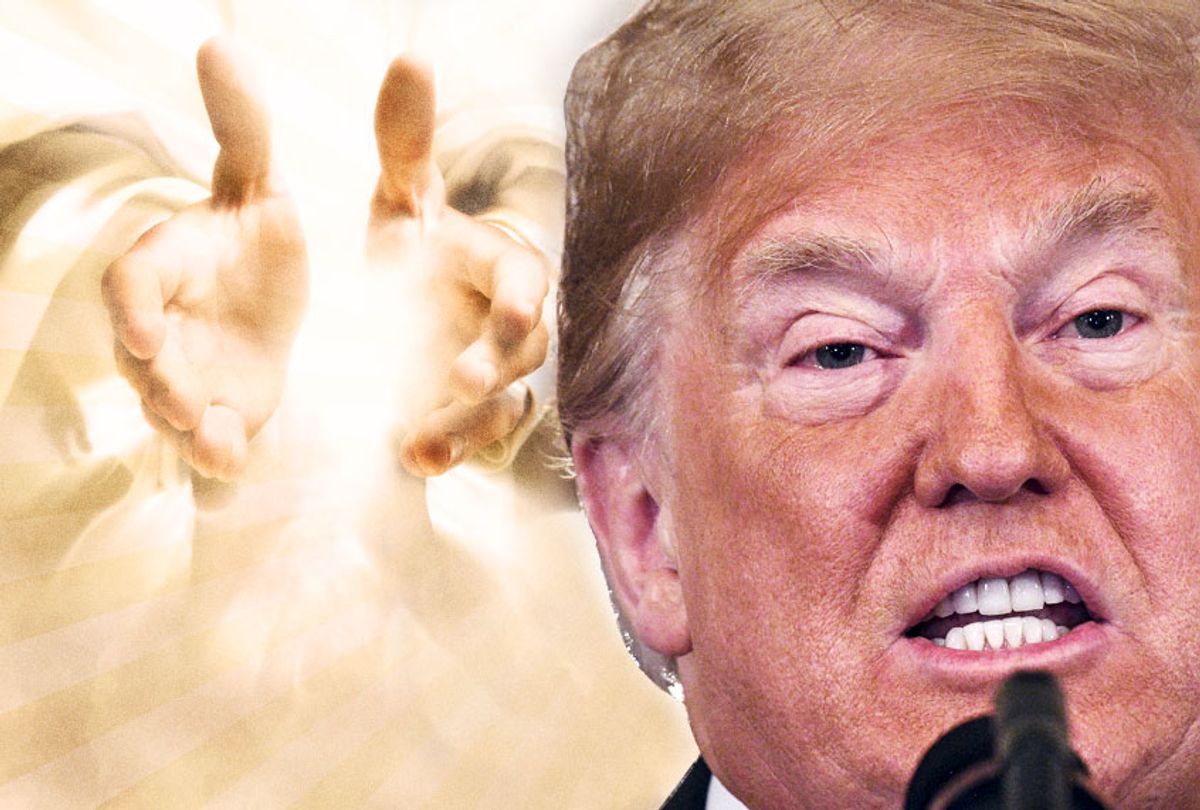 President Donald Trump took to Twitter on Monday to heap praise upon his ally Roger Stone, who continues to maintain his refusal to flip — even as Trump’s former fixer, Michael Cohen, who once said he’d take a bullet for the president, begged federal prosecutors to not serve jail time.

Stone might be Trump’s most famous supporter — but there are millions of Americans who refuse to abandon the president regardless of the chaotic news cycle. A poll conducted over the summer found that many Trump supporters trust the President more than their own friends and family.

Raw Story spoke with Yale psychiatry professor Bandy X. Lee on why the president’s supporters show such undying devotion to a man who’s repeatedly reneged on promises and whose tumultuous first term has been filled with shake-ups. (Lee speaks for herself, not for Yale).

Raw Story: In your opinion, what are the emotions driving Donald Trump’s base?

Bandy X. Lee: The sense of grandiose omnipotence that he displays seems especially appealing to his emotionally-needy followers. No matter what the world says, he fights back against criticism, continues to lie in the face of truth, and above all is still president. What matters is that he is winning, not whether he is honest or law-abiding. This may seem puzzling to the rest of us, but when you are overcome with feelings of powerlessness, this type of cartoonish, exaggerated force is often more important than true ability. This is the more primitive morality, as we call it, of “might makes right,” which in normal development you grow out of by age five.

But, in this case, Trump appeals to that childlike degree of emotional development? Why?

Strongman-type personalities are very appealing in times of socioeconomic or political crisis, as the population is less able to think rationally but is rather overcome with fear, or desire to draw strength from fantastical ideas. This happens to normal people in times of stress, or to people whose development has been stunted because of emotional injury. The problem is, the person who promises the impossible and states, “I alone can fix it,” and gives himself an A+ on his performance, is not a strong person who can deliver but the opposite. So Mr. Trump’s “base“ looks for someone to rescue them and their intense yearning does not allow them to see through his deception, while Mr. Trump senses better than anyone their needs (they are his) and makes use of them for his own benefit—even as he disdains his supporters for being so gullible. In this manner, they fulfill each other’s emotional needs in a mutually unhealthy way.

One concern I have, in my 20 years of studying this personality structure while treating violent offenders, is the disturbing societal trend. More and more of this personality type are taking on leadership positions, including of corporations, whereas 20 years ago one would mostly find them in jails and prisons. This also means there are a growing number of people who emulate them in the general culture, who become deprived from the structures that they create, and who become emotionally traumatized as a result of any of these consequences. People who are wounded this way continue to seek omnipotent parental figures as adults, and the vicious circle continues. Unable to find outer satisfaction for their inner needs, some keep pursuing ever greater power until they reach the highest positions, but since this is the opposite of proper treatment, their conditions only grow worse while society suffers a trail of carnage. It is actually a tragedy that Mr. Trump cannot receive proper care, even as his disorder is on display for the world to see, but is rather surrounded by those who enable his illness and make use of his weaknesses to their own destructive ends.

On the one hand, different demographics that have tended to support Trump in the past — let’s white women and neo-Nazis — don’t have much in common. Are there psychological factors that unite them?

Well, he unites them through a common, mythological past that they can all be nostalgic for, and that might be his “talent.” We know from the former Yugoslavia that this past can be hundreds of years ago, not just decades, and is really a metaphor for discontent with the self in the present. Mr. Trump’s behavioral pattern is not that of leaders at all but rather of obsequious followers, as we have seen Mr. Trump become in the presence of even more successful strongmen, such as Vladimir Putin, Kim Jong-Un, or Rodrigo Duterte. We find in him a pattern of following exactly what his base is looking for—he has no intrinsic philosophy or ideology but is responding to an emotional need for adulation and approval, and so he will try anything that gets as many people on board as possible. He will also sense keenly those who will never go along with his pathological methods—that is, healthy people—and drop them instantly. That is why we see him desperately clinging to an ever narrower base with increasingly fringe ideas.

He also has to scapegoat groups in order to distract from his billionaire cabinet, tax breaks for the rich, and trade wars that hurt his base the most, and so his demonizing of other helpless groups will only increase with time. We were worried that he might lead us into a devastating war or stage a terrorist attack, but he actually managed to turn a humanitarian crisis of people fleeing violence into an invading army that required thousands of troops at the Mexican border. If this “feigned war” fails to distract, then he may yet stage a real war. With the special counsel’s investigations about to be released, after devastating midterm elections for him and in a vulnerable economy, he will experience loss of popularity as a terrifying threat to his inflated self-image. There will likely be no limit to the violence he is capable of, since destroying the world would be nothing compared to the shame and humiliation he might suffer.

By the way, I think we need to include a very different demographic group among his supporters, which is the richest one percent. This will be the more calculating, pragmatic group. How is such a minority able to control politics and to keep convincing 99 percent of the population to give up what it has so that it can grow richer still? It is by distracting and manipulating the 99 percent through advertising, hot-button issues such as abortion, Fox News, and reality TV, which explicitly employ psychological techniques to make the population more impulsive, irrational, and ill-informed. So when the federally-funded American Psychiatric Association, which heavily depends on the pharmaceutical industry, says that psychiatrists should not comment on the president’s mental instability, we have to question: is it protecting the psychological methods that are being used to manipulate the public so as to make it more unhealthy, while blocking information that might restore its health? If mental health professionals were allowed to educate and inform the public more about psychological matters, then the population would be empowered, and healing could start replacing the damage.

How does Donald Trump mirror and communicate with his base?

A big part of this is through Twitter. This is why Mr. Trump will not stop, no matter how undignified people said it was of a president from the beginning. He knows it is his psychological lifeline. I was recently asked in an interview to comment on Twitter’s hateful conduct policy, which I read for the first time, and it was clear that he violated it from the first line, but they were not able to deactivate his account, since they know the backlash would be severe. But the only way to manage someone with his condition is to set severe limits, restrain, and remove from access to weapons — and tweets are his psychological weapon, which he “shoots” in order to exert his power.

Another way he communicates with his base is through his numerous rallies. He projects a lot. Projection is a psychological term for displacing thoughts or qualities in yourself you cannot tolerate onto someone else. He does this when he calls legitimate news “fake” and news agencies “the enemy of the people.” He is unconsciously telling us that he is himself “fake news” and “the enemy of the people.” He also made up the clever slogan, “Democrats produce mobs. Republicans produce jobs.”

And that is not accurate because …

But if you look at the statistics, the majority of the “angry mobs” that commit violence and terrorism are right-wing, while Democratic policies almost always lower unemployment rates. And when he calls Hillary Clinton “crooked” and that we should “lock her up,” he is trying to disown his fraudulent tendencies and to block thoughts of seeing himself as someone we need to lock up. The extreme exaggeration, the inability to consider the possibility that it could apply to him, and the failure to test against obvious reality give away the fact that the opposite is true, but his obedient base is predisposed to believing his defenses more than their own observations.

Trump seems to have intuited how to communicate with his base, evading the filter of the media. What do you think about that?

You are right in that it is all intuitive, not rational or logical, which would have less emotional force. Emotional power can be helpful when healthy, but when unhealthy, it can overcome all healthy approaches. As mental health professionals, we have to watch the media continue to get played, and it still has not managed to catch up. There is a phenomenon called “shared psychosis” (also called “folie à deux”) that happens when an untreated sick person is in close proximity to, say, other family members within a household. In such a situation, normal people grow increasingly out of touch with reality and take on symptoms of the person who is unwell. It can also happen with an impaired president — once in power, he becomes not only the most urgent problem that needs to be addressed but a cause of widespread deterioration of health in a way that can become a “folie à millions.” Treatment involves removing the sick individual from the others, and very quickly, the others return to normal. It shows how powerful mental sickness is: the otherwise normal person becomes sick and not the other way around. His unfettered access to the people through Twitter is as dangerous as his unfettered access to the nuclear codes, since he is laying the groundwork for a culture of violence that can unleash epidemics of violence. This is why waiting for the next decision of voters in 2020 is itself dangerous and reckless in its lack of understanding of the present danger the president poses.