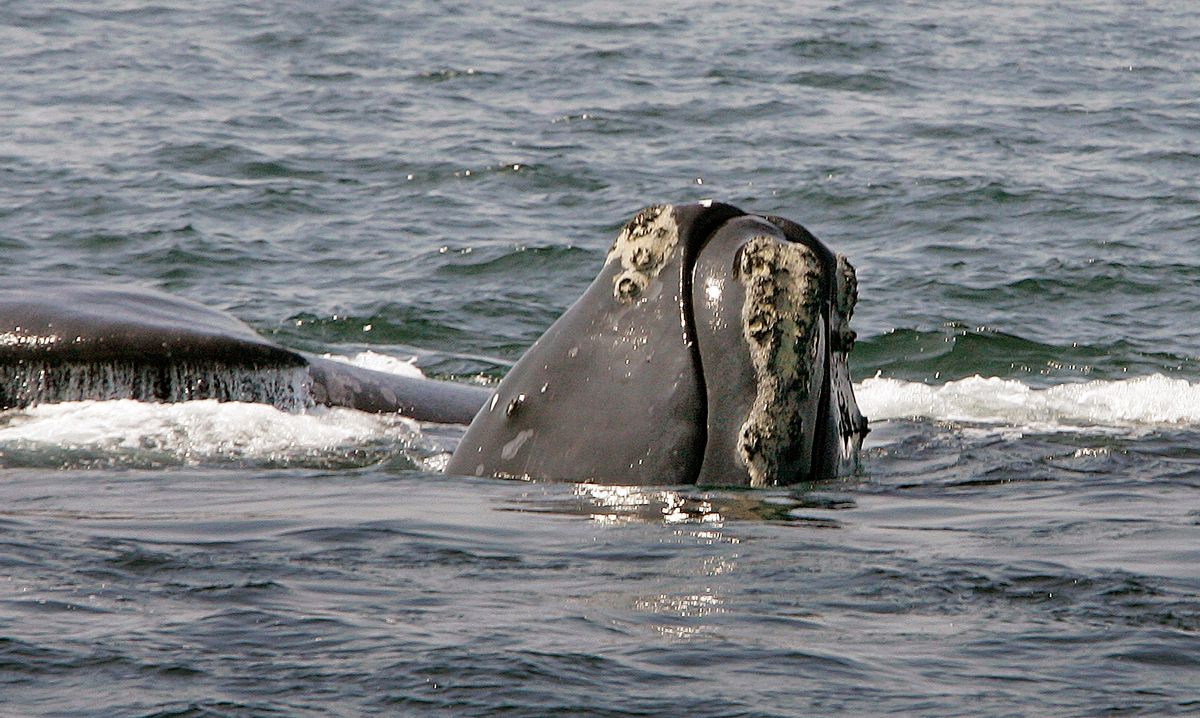 FILE - In this April 10, 2008 file photo, the head of a right whale peers up from the water as another whale passes behind in Cape Cod Bay near Provincetown, Mass. The endangered whales increasingly are frequenting the bay, enticed by the fine dining possibilities of its plankton-rich waters. They foraged in the bay for centuries, where their numbers were decimated when whalers hunted them for their oil and plastic-like baleen bone. For a stretch in the late 1990s, fewer than 30 whales were sighted each year. (AP Photo/Stephan Savoia, File) (AP)
--

There's a lot of oil and gas on Earth, but only 450 right whales. Now, the Trump Administration has signaled that it is more interested in opening up more oil and gas deposits for corporations than it is in protecting this critically endangered cetacean, whose survival is threatened by seismic blasting in the North Atlantic.

Though numerous scientists and conversation groups have repeatedly warned about the dangers seismic testing could pose to one of the world’s most endangered whale populations, last Friday the Trump Administration approved requests from five oil companies — CGG, Ion, Spectrum Geo Inc., TGS-NOPEC, and WesternGeco — to conduct seismic surveys in the Northern Atlantic Ocean. Researchers and various East Coast politicians opposed the plan. Conservationists say the testing will only cause more stress to the estimated 450 right whales left on Earth who are struggling to survive and reproduce.

The authorizations came a week after the Trump Administration released an alarming (to put it mildly) report on the public health and economic challenges the country will face in the wake of climate change — a report that President Donald Trump then summarily dismissed.

The National Marine Fisheries Service, a division of the National Oceanic and Atmospheric Administration (NOAA), issued the final authorizations “under the Marine Mammal Protection Act to incidentally, but not intentionally, harass marine mammals to companies proposing to conduct geophysical surveys in support of hydrocarbon exploration in the Atlantic Ocean.”

In an email, Jenni Lyons, Communications Specialist at the NOAA, told Salon the authorizations do not authorize death of marine mammals, nor does the the organization expect mortality to occur.  She noted there are mitigation and monitoring measures to protect marine life — for example, observers are required to watch for marine mammals.

“There are also acoustic arrays that listen for the animals under the water,” Lyons said in an email. “The observers have the authority to call for a shutdown of the equipment when animals are in the area. If there is a dispute, it must be addressed only after the necessary mitigation action has been taken."

The proposed mitigations aren’t enough to prevent an irreversible impact on the right whale population, according to marine life experts. Seismic surveying is a method in which airguns use loud blasts to penetrate through miles of the ocean floor to identify potential oil and gas deposits. Since the blasts are so loud, and whales and other marine life use sound to communicate, such events can be incredibly disruptive and stressful.

“Whales and dolphins and other species depend on sound for their ability to find food, mates, avoid predators, and to navigate everything they need to do to survive and reproduce in the wild,” Michael Jasny, the Director of the Marine Mammal Protection Project at the Natural Resources Defense Council, told Salon. “When you introduce an activity this disruptive you have effects on the entire marine ecosystem on a wide scale.”

Jasny said for the right whales, it means disrupting their behaviors, habitat displacement, and possibly separating mothers from their calves. He described the challenges, including seismic testing, these whales currently face as a “recipe for extinction.”

“Right whale calves stay in contact with [their mother] by using a very quiet sound that can easily be masked by a seismic array, that increases the risk of predation on the calf by sharks, or other species, and if the calf is separated for a long time that could mean the death of a calf,” Jasny explained.

Jasny said the right whale population has fallen “dramatically”— from 500 to nearly 400 — since 2010 for a number of reasons, such as entanglement (getting caught in nets), collisions with ships, and changes in their environment which are negatively affecting the health of female whales who then have trouble reproducing — partly due to chronic stress.

These concerns for the right whales have been voiced to the Trump Administration via a public commenting period. They were also voiced when the Obama Administration considered permits for seismic testing. In 2015 and 2016, various scientists collectively penned their concerns in separate letters to former President Barack Obama. In a 2016 letter, marine biologists stated: “In light of the desperate level of endangerment of the North Atlantic right whale and the serious consequences of entanglement, it is critical that other major stressors are minimized or removed to ensure the recovery and long-term survival of this species.” Obama denied testing permits in 2017.

Dr. Howard Rosenbaum, director of the Wildlife Conservation Society’s Ocean Giants Program and who has been part of the aforementioned efforts, told Salon he was “disappointed” that the Trump Administration approved the permits.

“The science is very clear that these do have an impact to marine species,” he added. “We are concerned about what adding this level of noise will do to the [right whale species],” he said, noting it’s not just a concern of environmentalists, but of all civil society.