G20: You can smell tear gas in the streets as the oil industry squabbles

What the G20 and OPEC meetings mean for the political relations, economies, and people of the world 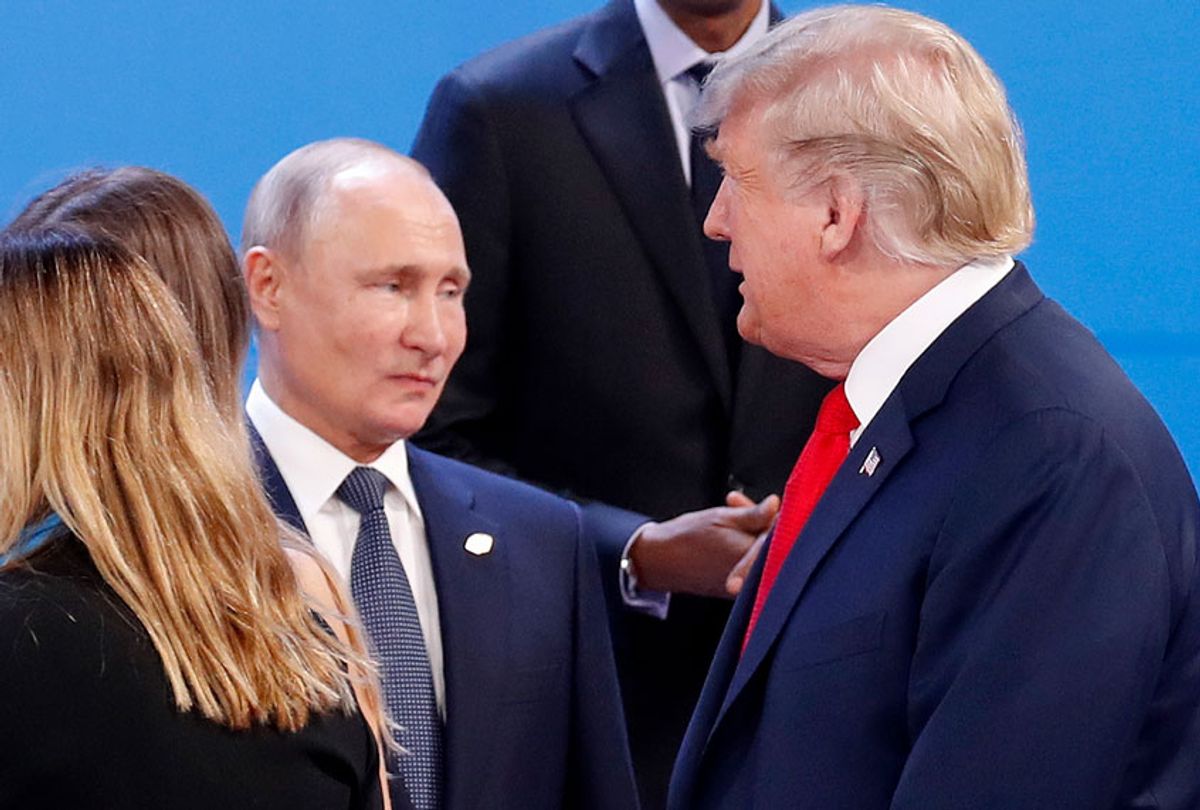 Vladimir Putin and Donald Trump as they gather for the group photo at the start of the G20 summit in Buenos Aires, Argentina, Friday, Nov. 30, 2018. (AP/Pablo Martinez Monsivais)
--

Last week, two important meetings took place — one, in Buenos Aires, Argentina, of the Group of 20 (G20) nations, and two, in Vienna, Austria, of the Organization of the Petroleum Exporting Countries (OPEC) and other oil producers. The two meetings did not produce any resolution to the major economic challenges in the world. But they did soothe the nerves of financial markets. At the G20, the United States and China dialed down the temperature over trade but did not settle the long-term grievances each side has of the other. At the OPEC+ meeting, Russia and Saudi Arabia agreed to cut production and raise the price of oil despite pressure from the United States and others to keep oil prices low.

At neither meeting did the major powers find solutions to their problems. They are all caught in mazes from which there are no easy exits. But what calmed the world of finance was that the geopolitical tension between the major powers seemed to have lessened. What impact this reduced tension has for the world’s people, however, is not clear.

The “trade war” engineered by U.S. President Donald Trump against China began with tariffs and ended with a damp squib. At the G20, Trump told China’s Xi Jinping that the U.S. tariffs that would have gone up to 25 percent on $200 billion worth of Chinese imports will no longer be applied. China, for its part, said that it would import more goods from the United States. No specifics were announced, which is why the tensions over even this agreement spilled over onto Twitter (courtesy of Trump’s hyperbole) and into more sober statements from the Chinese government.

The more fundamental questions of intellectual property and currency valuation remain unsolved. The United States accuses China of theft of the intellectual property of U.S. firms, but the Chinese counter—as they have in the arbitration panels of the World Trade Organization — that they merely draw from technology transferred as a result of commercial agreements freely made by firms eager to use Chinese labor. It will be impossible to resolve these two problems, since neither side sees the issues in the same way. Their worldviews regarding intellectual property and currency valuation are utterly alien to each other. If the United States believes that China is unfairly valuing its currency, the Chinese point to the unfair advantage that the dollar has over every currency in the world since it is used as one of the major global currencies for facilitation of trade and for the storage of wealth.

Russia’s Vladimir Putin and Saudi Arabia’s Mohammed bin Salman offered each other a friendly hand slap at the G20. Everyone seemed happy to see Mohammed bin Salman, despite the clear evidence of his role in the murder of the Saudi journalist Jamal Khashoggi.

But the real agreements between Russia and Saudi Arabia were not directly made in Buenos Aires. They were made more quietly in Vienna at the OPEC+ meeting. At Buenos Aires, Putin said, “yes, we have an agreement to prolong our accords.” He was referring to the deal between Russia and Saudi Arabia since 2016 to manage oil prices to their mutual benefit. The deal notwithstanding, Saudi Arabia has continued to pump itself into trouble — flooding the market with oil, driving prices down and depleting its own treasury as a result. Now Russia is eager to see oil production cuts and oil prices rise. Trapped by sanctions and by low oil prices, Russia has plunged into internal economic difficulties. The real issue was how much each country inside and outside OPEC should pump. That is why Putin said, “there is no final deal on volumes.” In fact, even after the deal has begun to emerge, there is no final deal. Saudi Arabia has not been a good partner here. It has pumped outside the numbers over the course of the past few years, largely under pressure from the United States.

There are two reasons why the United States wants low oil prices, despite the fact that the U.S. is now one of the world’s largest oil producers. First, low oil prices mean an immediate subsidy for the U.S. consumer and for U.S. manufacturing firms. There is no economic incentive to move to renewable energy when oil prices are low. Second, low oil prices hit adversaries of the U.S.-led world order that — as it happens — are major oil producers. The list includes Iran and Venezuela, two countries that have been sent into internal turmoil as oil prices have plummeted. But the United States has sufficient tools to hurt these countries without forcing oil prices down. For instance, even if oil prices rise, U.S. sanctions can be harsh enough to cut Iranian and Venezuelan oil out of the market. The lack of Iranian and Venezuelan oil operates as an effective cut in oil production, which will itself raise oil prices.

Saudi Arabia has already begun to pressure Libya and Nigeria to reduce oil exports, although both these African countries are reliant upon oil revenues. Saudi Arabia has succeeded in pushing Qatar out of OPEC on political grounds, but since Qatar only produces 2 percent of OPEC’s crude oil the departure, Qatexit is not meaningful. Inside the world of oil, there are those who are always pushed aside so that others can benefit.

In 2005, Indian Petroleum Minister Mani Shankar Aiyar assembled his counterparts from across Asia to start a discussion on a buyers’ club. The precise issue on the table was the “Asian Premium” charged by Saudi Arabia and other oil producers to Asian countries. The “Asian Premium” is substantial—close to $10 billion per year for the Asian consumers of Gulf oil. It is what bothered Aiyar and the other oil ministers. But they did not come to any agreement.

Asia is the largest importer of oil in the world. India and China, with the United States, are the three largest importers of oil. Right behind them are Japan and South Korea. If you add the oil imports by China, India, Japan and South Korea, then these four Asian countries import a full third of world oil imports. They are both reliant upon the oil exporters, but they also have power as a bloc of consumers.

In 2012, China’s premier Wen Jiabao said that there needed to be a counter-cartel to OPEC that should include Europe and the United States. Interest in his proposal was minimal. Oil had reached $100 per barrel. It stifled economic growth and did not move any of these industrial giants toward non-carbon renewable fuel.

The issue of a buyers’ cartel came back on the table in April this year at the International Energy Forum. The chairman of Indian Oil Corporation (IOC) Sanjiv Singh and the chairman of China National Petroleum Corporation (CNPC) Wang Yilin then met in Beijing to go deeper into the possibility. By June, China and India — which import 17 percent of the world’s oil—had begun to openly talk about a buyers’ cartel to help create “stable and moderate” oil prices, as India’s current Petroleum Minister Dharmendra Pradhan put it.

China and India have been upset by the U.S. sanctions on Iran. They have felt that these produce an adverse impact on Asian economies. They are joined by Japan and the European Union, who are also not pleased with these sanctions. It is now being said that if China and India establish a buyers’ club, Japan and Europe will join in.

From the air-conditioned rooms of the oligarchy, we go to the tear gas of the streets.

Protests in Paris, France, have been the most violent in decades. The yellow vests (gilets jaunes) appeared as if out of nowhere to demonstrate against the French government’s hike in fuel prices. They make the case that the violence of the economy has destroyed their ability to function. Any violence on the streets is a reflection of the violence that structures their lives. The streets of Paris smelled of tear gas.

In Buenos Aires, Argentina, labor unions and political groups of one kind or another planned massive protests against the G20. They wanted to scream at their leaders, who have been deaf to their pleas. But the Argentinian government held the G20 meeting at the Costa Salguero convention center, on the magnificent Rio de La Plata. Police cordoned off the area, while the coast guard boats sailed up and down the river. No one could get near the site. None of the leaders were interrupted by the chants.

There were no protests in Vienna. The OPEC building was nonetheless surrounded by the elite WEGA units. No one knew that the meeting was being held. There is so little democracy in the institutions that structure our lives.