The Manafort-Assange meeting that wasn't: A case study in journalistic malpractice 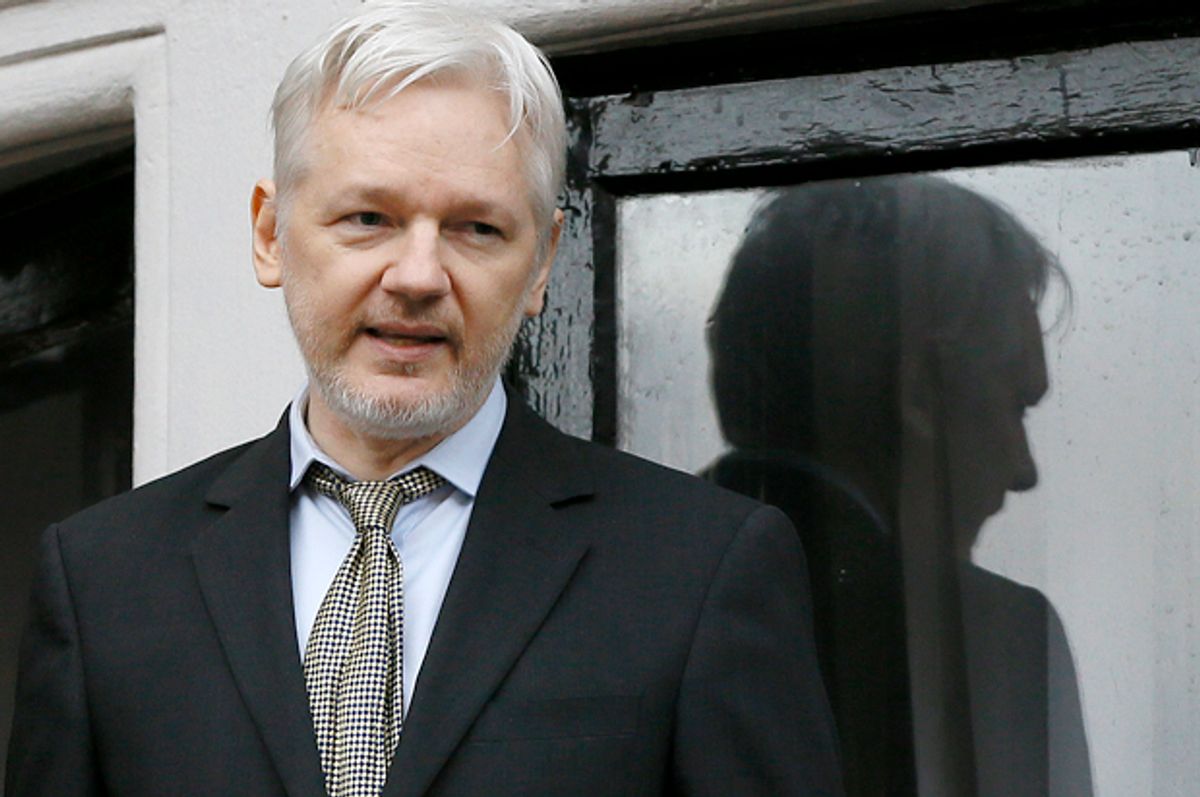 This article originally appeared at FAIR.org

In what has been described as potentially the biggest story of the year, the Guardian’s Luke Harding reported on Nov. 27 that Donald Trump’s former campaign manager, Paul Manafort, held a series of secret talks with WikiLeaks editor Julian Assange. These meetings were said to have occurred inside the Ecuadorian embassy between 2013 and 2016. The report also mentions that unspecified “Russians” were also among Assange’s visitors. The scoop, according to the newspaper, could “shed new light” on the role of WikiLeaks’ release of Democratic Party emails in the 2016 presidential election.

However, there were serious problems with the report. Firstly, the entire story was based upon anonymous intelligence sources, sources that could not tell the newspaper exactly when the meetings took place.

Furthermore, the Ecuadorian embassy is one of the most surveilled buildings in the most surveilled city in the world, and was under 24-hour police guard and monitoring, costing the UK government over £11 million between 2012 and 2015. The embassy also had very tight internal security, with all visitors thoroughly vetted, required to sign in and leave all their electronic devices with security. Is it really possible any figure, let alone Donald Trump’s campaign manager, could walk in for a series of secret meetings without leaving record with Ecuador, or being seen by the media or police?

For their part, both Manafort and WikiLeaks have strenuously denied the accusation, with the latter announcing, “This is going to be one of the most infamous news disasters since Stern published the Hitler Diaries.” It also declared it was planning to sue the Guardian, setting up a Go Fund Me appeal to help with legal costs.

The story that threatened to become the political news event of the winter was quickly dropped by the media, with search interest for terms such as “Manafort” and “Assange” dropping by around 90 percent in one day.

"The most logical explanation"

As the story crumbled, Politico put forward a bizarre explanation for the event, written by an anonymous ex-CIA officer, who argued that Russian intelligence had likely planted the story as a means to discredit Harding and the Guardian, noting that, if it is all false, “the most logical explanation is that it is an attempt to make Harding look bad.” Thus, Trump, WikiLeaks and Russia’s vast “disinformation network” would be able to deride the press as purveyors of “fake news.” It appears not to have occurred to the CIA alum that the story could have been planted to discredit WikiLeaks, Russia or Manafort (and by extension, Trump). 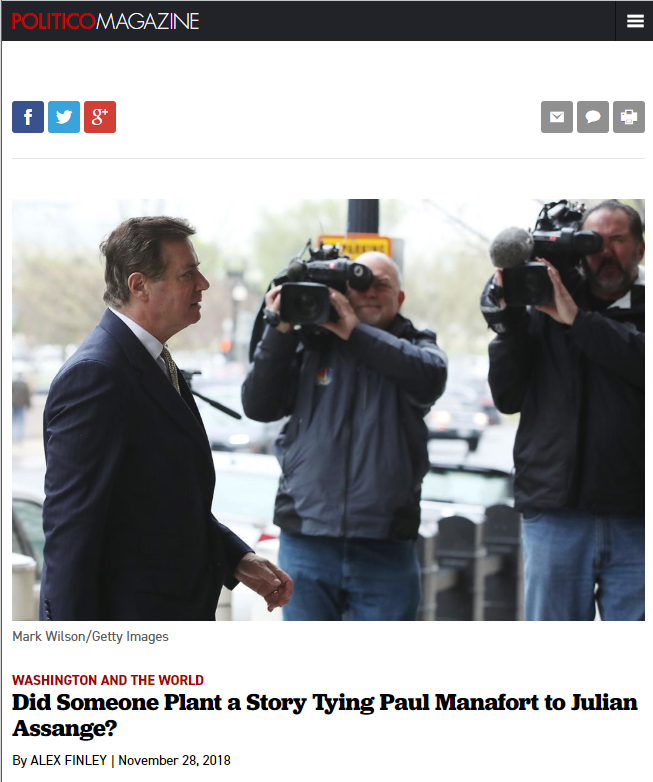 The anonymous spy ended by stating he “finds it hard to believe Harding would not go to great lengths to confirm his story.” Russia certainly would have an interest in discrediting the Guardian and Harding, who has a long history of criticizing Putinism and was refused re-entry to the country in 2011. But the newspaper appears not to have done even basic diligence over what must have been multiple new, unknown sources by checking with the embassy or with the police, if this was indeed the case. It also ignores that one source appears to have been Ecuadorian intelligence itself, not Russian.

State officials have a long history of using a pliant media to manipulate public discourse around international struggles by introducing false information. A central part of the drive to the invasion of Iraq was the false claim that Saddam Hussein was just 45 minutes from attacking the U.S. and UK with WMDs. Officials urged that we could not wait for the mushroom cloud and had to act now. In 2016 US officials planted a false story in the Washington Post that Russia had hacked into the U.S. electric grid.

That these claims were demonstrably incorrect did not delegitimize or scupper the interests of the state, or dampen the dominant narrative. There is rarely, if ever, any price to pay for official sources lying to journalists. This was why “the most logical explanation” was certainly not that Iraqi or Russian intelligence had fed the media fake information as to discredit Western reporting. The Manafort story went viral, while the retraction of some of its claims received, in comparison, scant attention.

Harding also has an ongoing and bitter feud with Assange. (He wrote a highly critical biography of the WikiLeaks editor that was subsequently turned into the movie, "The Fifth Estate," which Assange described as a “massive propaganda attack” on him.)

Harding also has a history of publishing deeply inflammatory claims without being able to back them up. His book, "Collusion," on alleged Russian interference in the 2016 election was a New York Times No. 1 bestseller, and yet he could not give any evidence of collusion when asked in a now-infamous interview with Aaron Maté of The Real News, unable to defend even the title of his book, let alone his thesis. After being pressed harder by Maté, he simply disconnected the interview prematurely.

Therefore, Occam’s razor suggests the most logical explanation is likely that the Guardian published anonymous official sources without checking their claims’ validity.

It is standard journalistic practice to name and check sources. Without a name to match to a quote, its credibility (and therefore that of the story) immediately drops, as there are no repercussions for that individual if they are untruthful. Sources (or journalists themselves) could simply make up anything they wanted with no consequences. Therefore, using anonymous sources is strongly discouraged, except in rare circumstances, generally when sources would face retaliation for revealing information of vital public interest. The Society of Professional Journalists’ code of ethics insists journalists “identify sources whenever feasible” and that journalists must “always question sources’ motives before promising anonymity.”

Unfortunately, the use of anonymous officials in reporting is increasing, and is a worrying trend in modern journalism, as the veteran reporter Robert Fisk once explained:

In this way, anonymous state officials can influence and drive media narratives without even needed to have their name associated with a claim. However, we appear to be entering a new era where unnamed state officials not only influence, but actually write the news themselves, as demonstrated by the Politico article.

Furthermore, as FAIR (8/22/18, 9/25/18) has already catalogued, media giants such as Facebook are already working with governmental organizations like the Atlantic Council to control what we see online, under the guise of battling Russian-sponsored fake news. The Atlantic Council is a NATO offshoot whose board of directors includes neoconservative hawks like Condoleezza Rice, Colin Powell, Henry Kissinger and James Baker; former CIA directors like Robert Gates, Leon Panetta and Michael Hayden; as well as retired generals like Wesley Clark and David Petraeus.

Leave alone that much of the most sensational reporting and claims about Russian influence comes from the Atlantic Council’s reports in the first place, thus creating a perfect feedback loop justifying more active measures. Therefore, much of the coverage of Russian state propaganda is itself state propaganda!

The utility of misreporting

Why was a highly questionable report from a foreign media outlet based upon anonymous sources picked up far and wide, sometimes without even a basic follow-up, such as asking for comment from the Ecuadorian embassy, Assange or Manafort (again, standard journalistic practice)?

As I have argued previously, there is great utility for the establishment in promoting the idea of foreign interference in American domestic issues. For one, it helps develop a conspiratorial mindset among the public, encouraging them to be less critical of the state when the United States is “under attack.” Liberals’ trust in the FBI has markedly increased since Trump’s election and the focus on Russia.

Kremlin-sponsored “fake news” also serves as a pretext for mainstream media monopolies to re-tighten their grip over the means of communication. Media giants such as Google, Facebook, Bing and YouTube have changed their algorithms, supposedly to fight fake news. However, the consequence has been to strangle alternative media that challenged the mainstream narrative. Since Google changed its algorithm, WikiLeaks’ search traffic dropped 30 percent, AlterNet by 63 percent, Democracy Now! by 36 percent and Common Dreams by 37 percent.

Finally, for the political establishment, the Russian fake news story gives them a convenient excuse as to why Trump was able to win the Republican nomination and defeat Hillary Clinton and to why new movements, from the alt-right to Black Lives Matter and the Bernie Sanders phenomenon on the left, have occurred. They are not responses to the decay of the political and economic system, but examples of foreign interference.

Adam Johnson’s “North Korea Law of Journalism” states that journalistic standards “are inversely proportional to a country’s enemy status,” meaning that the more antagonistic the U.S. is to a country, the more lackadaisical journalists can be with the truth while reporting on said state. FAIR has consistently catalogued misreporting of enemy states, such as Iran (9/9/15; 7/25/17), North Korea (5/9/17; 3/22/17), Venezuela ( 5/16/17; 3/2/07), Cuba or Syria (10/21/15), where their supposed threat to the world or their human rights violations are ramped up, while downplaying crimes of friendly states (2/1/09).

The same can equally be said of enemy political figures like Assange, Sanders or Jill Stein. When it serves a political function, stories about official enemies too good to be true are also too good not to publish.