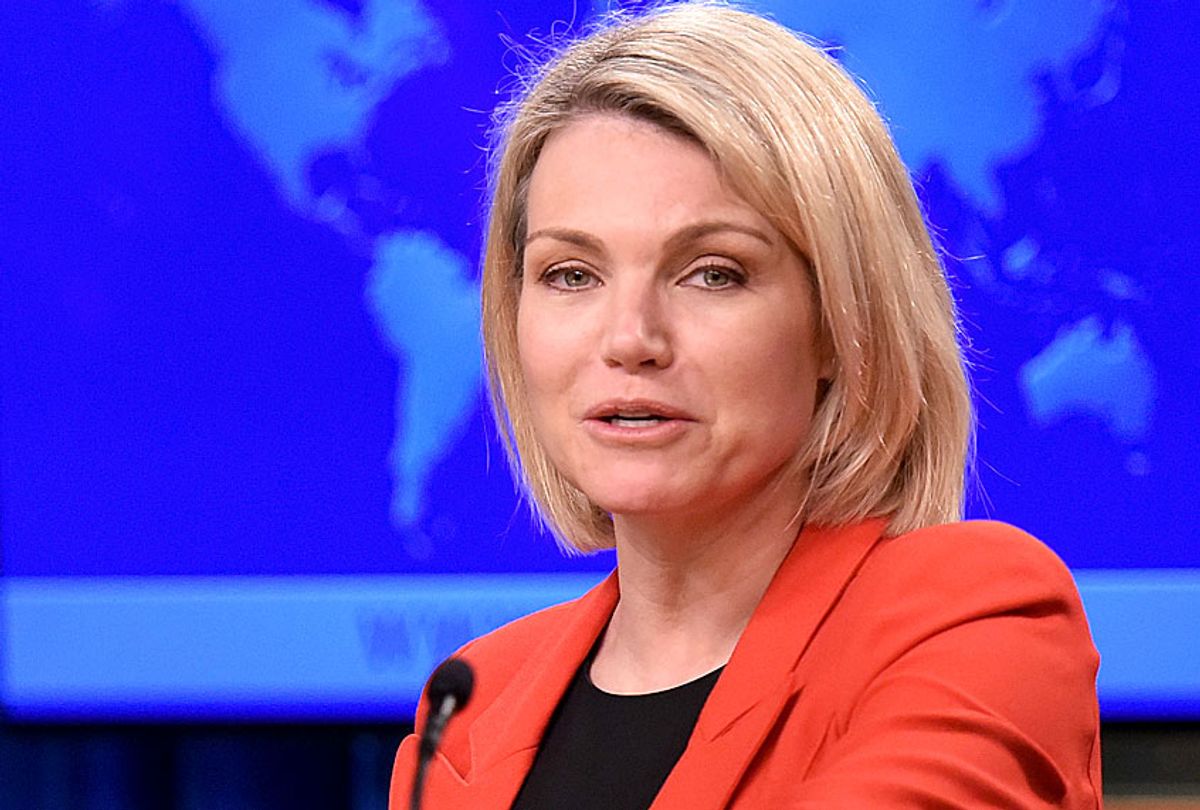 Trump told reporters outside the White House Friday that Nauert, 48, will be his pick to fill the vacancy left by Haley's unexpected resignation in October. Haley, the former governor of South Carolina, has remained in her post pending a replacement.

Trump touted Nauert as “someone we know very well” and touted her work under Secretary of State Mike Pompeo.

“She’s going to work with Nikki Haley to replace Nikki at the United Nations,” he said. “She’s very talented, very smart, very quick, and I think she’s going to be respected by all.”

Her nomination is expected to be hotly contested given her lack of relevant experience. Nauert joined the State Department as its spokeswoman under then-Secretary of State Rex Tillerson last year. From March to October of this year she also served as the acting undersecretary of public diplomacy and public affairs. She was previously floated as a possible replacement for White House press secretary Sarah Huckabee Sanders.

As State Department spokeswoman, Nauert caught flak for declaring that the D-Day invasion was an example of the United States’ “strong relationship” with Germany.

Her lack of experience may also signal that Nauert may not have the clout held by her predecessor. CNN reported that Pompeo and national security adviser John Bolton have pushed for the UN position to be downgraded from the Cabinet-level job Haley had insisted on. Past Republican presidents have not elevated the UN ambassador position to the Cabinet level.

But Bloomberg reports that Nauert has the “strong support” of Pompeo and has become an ally of Ivanka Trump and Jared Kushner.

Prior to joining Trump’s State Department, Nauert worked for 15 years as a correspondent and host at Fox News, where she rose to prominence as a pundit during the Monica Lewinsky scandal. She also had a brief stint as a correspondent at ABC News and appeared in multiple episodes of the Fox series “24.”

As a pundit, she claimed that immigrant children were bringing “disease” to the United States in 2014, spread conspiracy theories about the 2012 Benghazi attacks, and claimed that a swim class for Somali-American girls at a YMCA pool in St. Paul, Minnesota, was evidence that “sharia law is now changing everything.”

Sen. Mazie Hirono, the Hawaii Democrat, was the first senator to come out in opposition of Nauert’s nomination.

"I would have difficulty because there are those of us that care about people's experience and qualifications," Hirono told CNN Friday. "I do not know that being loyal to the president is the uppermost qualification. It is for the president, but it isn’t for me.” With Republicans holding a 53-47 majority in the incoming Senate, however -- and with Trump critics like Sen. Bob Corker of Tennessee and Sen. Jeff Flake of Arizona leaving office -- Nauert's confirmation appears likely.

Michael McFaul, who served as U.S. ambassador to Russia under Barack Obama, praised Nauert as a spokesperson but said she lacks the foreign policy and diplomatic expertise for the job and was likely picked to push the White House line at the United Nations.

“Maybe Trump and Bolton just want someone to represent [or] read foreign policy talking points that they write at UN?” he wrote on Twitter. “Haley frequently expressed independent positions, especially on Russia and North Korea; Nauert wont do that.”