Bask in the absurdity of this 2018 #MAGA gift guide 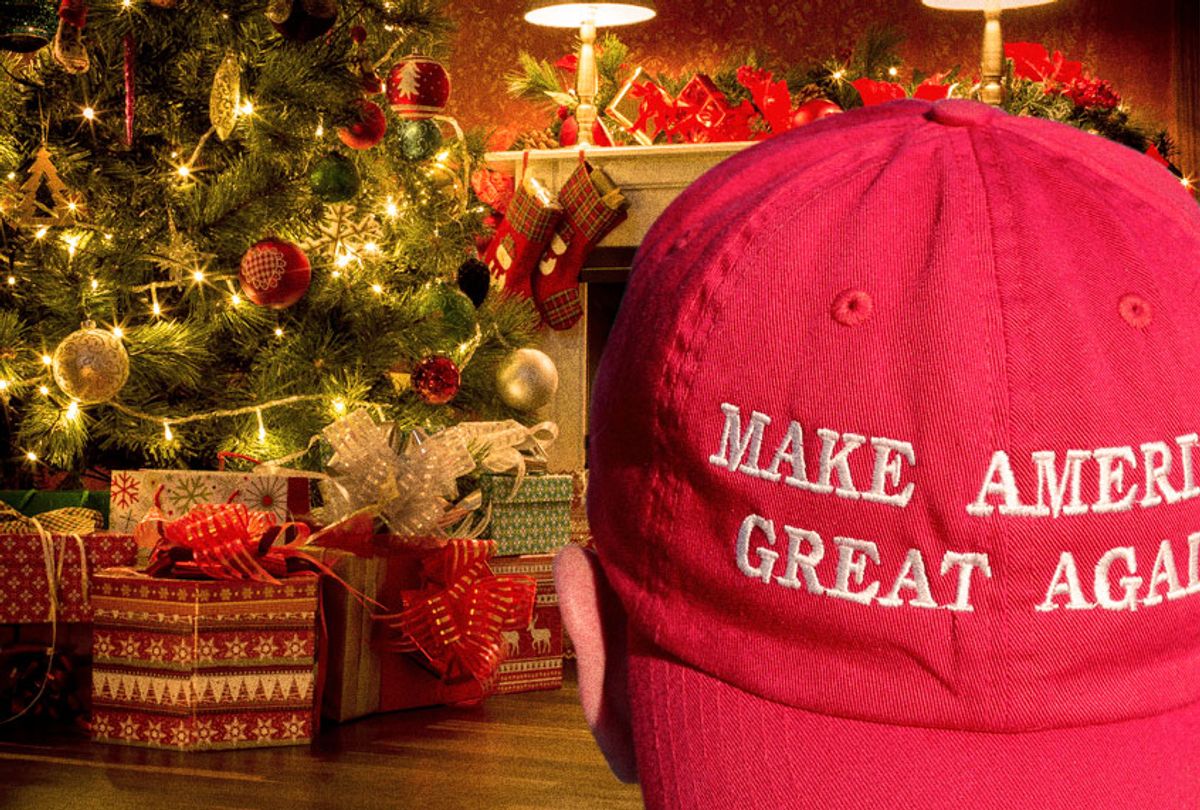 There’s no official date that the conservative “War on Christmas” picks back up each year, but in 2018 it was probably November 19th, when President Trump gently laid his palm on a horse’s assin front of the White House. To the president’s credit, it was no ordinary horse; it was a Clydesdale, and it had just pulled a carriage containing a 20-foot-tall Fraser fir to the North Portico, the iconic entrance facing Pennsylvania Avenue. “We received the @WhiteHouse Christmas tree yesterday!” the first lady tweeted the following morning. “It will grace the Blue Room throughout the season – hope you will come to the People’s house to see it!”

A week later, Melania Trump unveiled her annual collection of holiday decor, titled “American Treasures: Christmas at the White House.” Among the trappings featured in the Hallmark-caliber promotional video were various “Be Best”-branded pieces of kitsch, as well as a haunting, widely mocked corridor of blood-red Christmas trees. A few days after that, the president rang in the season on his Twitter feed, making sure to write “MERRY CHRISTMAS” in all caps, to own the libs.

The #MAGA crowd has been in the trenches battling on the president’s behalf ever since. Tucker Carlson parlayed a tongue-in-cheek HuffPost video about the marginalization of Rudolph into a prolonged segment wondering if “holiday traditions are safe from attack.” Donald Trump Jr. posted a meme of someone who had decorated the top of their tree with a Trump figurine. “Can’t decide an angel or a star, so I picked both,” the text reads, to which Don Jr. added “#triggered” to stick it to the libs. Kid Rock played the role of martyr, punctuating a Fox News hit promoting his turn as grand marshal of Nashville’s Christmas parade by aggressively calling Joy Behar “a bitch.” (He was ultimately removed from the role of grand marshal because of the comment.)

Most Trump supporters will need to find more practical ways to let the world know where their allegiance lies. If one were to get wind of a substitute teacher who told her students Santa doesn’t exist, for example, they could take to Facebook to express their desire to take her “out behind the woodshed” and “tie her up with barbed wire and beat her with a cattle prod.” (Fortunately, this teacher’s identity has not been made public, although she was asked not to return to the school.) Outside of posting on social media, which can be tricky, the safest, most effective way to demonstrate loyalty to the cause is simply to buy a bunch of shit.

Here are some easy options for the unhinged #MAGA bro in your life this holiday season.

Vice President Mike Pence recently visited Florida to deliver a speech at the Israeli-American Council National Conference. Before he left, he took some time to visit with the local SWAT team members who had protected him during his stay. One of the officers, Sgt. Matt Patten, wore a QAnon patch on the front of his uniform. “Question The Narrative,” the patch reads atop a stencil-style “Q.” That patch just so happens to be available for purchase on Amazon, as Jared Holt of Right Wing Watch pointed out on Twitter.

Though the patch is only $7.99, Patten wound up paying a far greater price for sporting it while on the job. A few days after the photo made the rounds on the Internet, the 31-year law enforcement veteran was removed from SWAT and reassigned to a different department. “Sergeant Patten’s actions of displaying unity with a controversial group not in alignment with the core values of the law enforcement and the Broward Sheriff’s Office discredited the agency, the county and himself,” a sheriff’s office supervisor wrote in a disciplinary report, according to the New York Times.

For those worried about losing their job, this QAnon handbook may be a safer bet.

Jon McNaughton is, without question, the pre-eminent artist of the #MAGA era. His classical paintings depicting Trump in a variety of absurdly valiant settings have drawn praise from the right and mockery from the left. McNaughton has painted the president guiding a boat full of key administration officials across the Swamp (a-la Washington crossing the Delaware), teaching a potential socialist in a hoodie how to fish (a-la Jesus, or something) and, most recently, scoring a touchdown against team of liberal football players wearing old-timey leather helmets (a-la Jim Thorpe). As McNaughton notes in his Twitter bio, his most famous work may be “The Forgotten Man,” which features President Obama trampling the Constitution as the Founding Fathers look on in horror. If that’s not graphic enough, he also did one of Obama lighting the Constitution on fire, and another of Obama enjoying a round of golf as a nuclear bomb detonates in the background. “It is not a partisan painting,” McNaughton writes of his signature work. “I take no favoritism of Republicans or Democrats. Both parties are guilty.”

Prints of McNaughton’s work are available on his website.

Stick your sweaty armpits into dueling American flags this holiday season for some reason.

Winning the 2016 election didn’t mean Trump was going to stop holding campaign-style rallies. Present at many of his post-election #MAGA gatherings is Trisha Hope, a real estate agent from Texas who traveled the country this summer selling a reference-style volume of the president’s tweets. As the title implies, the book is filled with nothing but the president’s tweets, typos and all. Hope got the idea for the book, which she sells for $35, after her friends who weren’t on Twitter kept asking her what Trump was tweeting. She initially reproduced his tweets on a website before deciding compile them in a bound volume.

Read more Rolling Stone: What This New Batch of Subpoenas Means for the Future of the Trump Organization

“I hope to get people to read it and understand and watch and reflect what he said when he said it and then how things evolve,” Hope told the Daily Beast. “He talks to us every single day. He tells us what he’s doing, what he’s thinking. He doesn’t hold back much, I think we can all agree to that. And it’s pretty unique.”

Visit Hope’s website to order a copy. It’s the perfect companion for sitting around the fire drinking cocoa on Christmas Eve, or for standing in the median yelling at passing cars during rush hour.

Wander around Times Square long enough and you might come across this bulb of Christmas cheer in a shop window. Or maybe not. The War on Christmas isn’t always fair.

It costs $55. Deal with it. No one said winning the War on Christmas was going to be cheap.

During his campaign for the Florida governorship, Republican Ron DeSantis released an ad in which he ran his young children through several #MAGA-centric learning exercises. In one, he encourages his young daughter to “build the wall” out of a stack of large cardboard bricks. She does a pretty good job. Not everyone has the floor space of the Desantis house, though, which is why conservative site Keep and Bear designed a LEGO-style set of uniform gray blocks so the #MAGA youth can build their own border wall. Make sure to take notice of the Mexican character wearing a sombrero and shaking maracas on the side of the box.

Keep and Bear notes that it may be too late to secure the blocks before Christmas. “Due to the overwhelming demand for our best-selling politically incorrect toy, orders placed before December 4th should arrive in time for Christmas,” a disclaimer reads. “Orders placed after December 4th, however, are not guaranteed for Christmas delivery.” Though orders may not be received until after Christmas, Keep and Bear writes that they “still highly recommend” ordering the set anyway.

A #MAGA gift guide in 2018 is really nothing more than a pretense to promote Trumpy Bear, the Trump fan’s Tickle Me Elmo. Though it’s been around since 2017, the 22-inch-tall stuffed bear has enjoyed a second life this holiday season after its copyright holder, Exceptional Products, secured some air time on local Fox News channels. The Trumpy Bear commercial was deemed too political for the network to air nationally. Exceptional Products VP Elliott Brackett finds this curious. “If I were running for office personally, these media outlets would take my money and run a political ad,” he explains to Rolling Stone. “With no sense of irony and no smile on their face, they’re saying it’s too political. At the same time, I’m watching a politician who bought a political ad on their station. It’s a bit of a head-scratcher why we can’t get more media.”

Exceptional Products has instead relied on word of mouth, press coverage and Internet ads for Trumpy Bear awareness. It’s worked, largely because of a series of commercials featuring everyone from a veteran, to a firefighter, to an older veteran touting their love for Trumpy Bear, which comes with a built-in American flag cape. The ads first drew national attention last year when Jimmy Kimmel featured one of them alongside a parody spot for a “Scaramucci Poochie.”

“He did such a good job making a funny fake commercial that it made a lot of people think that our bear wasn’t real,” says Brackett. “We had a lot of noise that was purely around people calling and going to the website to see if it was real. But if people are just looking to see if it’s real and don’t do anything, the product is going to fail. But not too long after they started buying it.”

A year later, Trumpy Bear is a #MAGA darling. He’s even made appearances at multiple Trump rallies, most recently when the president visited Mississippi to campaign for Cindy Hyde-Smith.

The difficulty buying national air time hasn’t been the only issue for Exceptional Products, which bought the copyright, and a draft of the commercial, from the Trumpy Bear’s creator. “People not allowing a commercial to run can happen, but what has surprised me is the individual reaction we’ve gotten from people,” Brackett says. “Maybe it’s the anonymity that the Internet affords, but people have had violent and gut-wrenching reactions to this. We’ve had people calling us, writing us, sending us physical mail, sending us email, going on social media and proactively calling us names and spewing hate, all while saying that the reason why they hate is that Trump is a hater. It’s the most ironic thing in the world.”

“They honestly feel like they are being beaten, like they are physically in peril, because of a teddy bear,” he adds of the haters, going on to note that Exceptional Products has received death threats over the Trumpy Bear. “We’ve had them personally, we’ve had them corporately, we’ve had someone in the same set of voicemails saying that they want the president assassinated and us killed.”

Though they couldn’t have foreseen such extreme backlash, it was Trumpy Bear’s ability to elicit a reaction from both sides that first attracted the attention of Exceptional Products. It’s also what has made it such a potent weapon in the War on Christmas, which isn’t so much about defending the sanctity of the holiday as it is about triggering liberals. The story of Trumpy Bear, then, is in many ways a parable for the Trump era, beginning with the 2016 election. “If I had a Bernie bear or a Hillary bear, I’d sell that one right along side it,” Brackett says. “But the simple fact is that Trumpy is so polarizing. I don’t think anyone would go out of their way to buy a Hillary bear. I’m not so sure about a Bernie bear, either, even if they like him a lot. It’s unique. This product doesn’t check any of our boxes, but it was done well enough that it was worth it to try.”

Trumpy Bear is available for two payments of $19.95, plus shipping and handling. Like many Trump-related products, it is made in China.