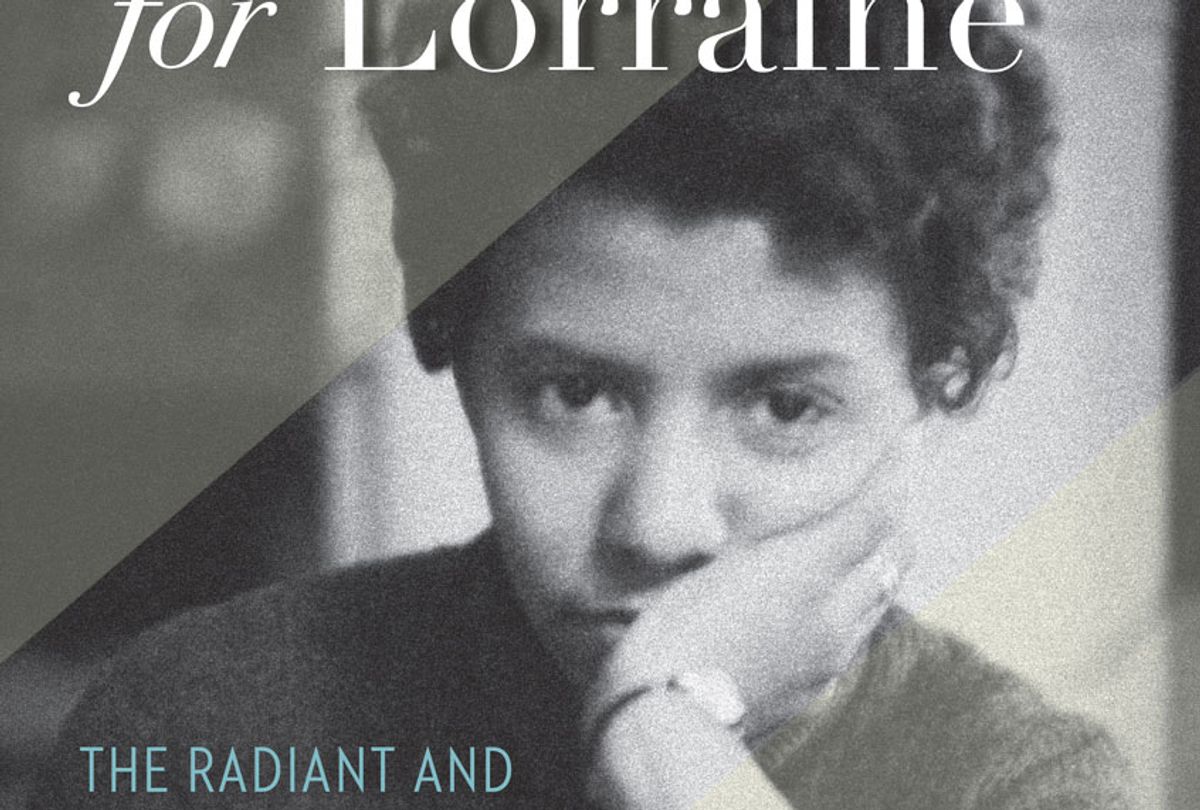 "Looking for Lorraine: The Radiant and Radical Life of Lorraine Hansberry" by Imani Perry (Beacon Press)
--

Excerpted from "Looking for Lorraine: The Radiant and Radical Life of Lorraine Hansberry" by Imani Perry. Copyright 2018. Excerpted with permission by Beacon Press.

Lorraine Hansberry emphasized self-determination for Black peo­ple. She was neither interested in status nor seeing Black folks manip­ulated by elites, whether said elites be Black or white. She wanted to be led by the people. It is this unflinching posture that makes Lorraine and James Baldwin's famous 1963 meeting with Attorney General Robert F. Kennedy so fascinating. Of course she was an elegant and poised role model, an achiever and an exception. But she’d also proven herself to be unwavering and even confrontational in ways that did not leave much room for working with elites and powerful politicians. Perhaps because RFK hadn’t paid attention to her strident positions and firm convictions, or he underestimated her, Lorraine wholly surprised the attorney general.

The day has been written about in numerous books and essays. The story is as follows: In response to the unrest in Birmingham, the attorney general called James Baldwin and other prominent Black people, and a few liberal white people, to meet with him quietly. He hoped to quell the Black people of my hometown, Birmingham, which was best described, for lack of a more appropriate metaphor, as a powder keg. The meeting took place on May 24, 1963, at a Kennedy-owned apartment at 24 Central Park South in Manhat­tan. In addition to RFK and his aide, Burke Marshall, present at the meeting were Jimmy and his brother David; Harry Belafonte; famous Black psychologist Kenneth Clark; Edwin Berry of the Chicago Ur­ban League; Clarence Jones, an advisor to Martin Luther King Jr.; the singer, actor, and activist Lena Horne; the actor Rip Torn; June Shagaloff of the NAACP; and Southern freedom movement orga­nizer Jerome Smith. Smith had founded the New Orleans chapter of the Congress of Racial Equality (CORE) and had initially come to New York so that doctors could attend to the jaw and head damage he’d sustained from beatings at the hands of Southern cops.

The energy of that time in history is important to understand. That year, Baldwin was touring the South and said, “There is, I should think, no Negro living in America who has not felt, briefly or for long periods, simple, naked, unanswerable hatred; who has not wanted to smash any white face he may encounter . . . to break the bodies of all white people and bring them low, as low as that dusk in which he himself has been and is being trampled.” Lorraine also felt this rage. Though the meeting began quietly, things heated up when Jerome asked about the government’s real role in Birmingham. He implied that they were insincere with respect to protecting the civil rights of African Americans. Having faced the violence of the white South with no assistance from the federal government, Jerome had an empirical basis for this feeling. Jimmy recalled that “Bobby—and here I am not telescoping but exercising restraint—had turned away from Jerome, as though to say, ‘I’ll talk to all of you, who are civilized. But who is he?’”

And then she unleashed. Recalled Baldwin, “Lorraine said (in memory she is standing, but I know she was sitting—she towered, that child, from a sitting position). ‘You have a great many very ac­complished people in this room, Mr. Attorney General, but the only man you should be listening to is that man [Jerome Smith] over there. That is the voice,’ she added after a moment during which Bobby sat absolutely still staring at her, ‘of twenty-two million people.’”

For Jimmy, Lorraine became a representative of a special sort, of Black womanhood, of freedom fighting, of her people writ large. He watched her face, saw her insistence that Bobby Kennedy hear her. He wrote,

“We would like,” said Lorraine, “from you, a moral commitment.”

He did not turn from her as he had turned away from Je­rome. He looked insulted—seemed to feel that he had been wasting his time.

Lorraine stood up and Jerome continued. Jerome talked about the “perpetual demolition” faced when Black men tried to protect their families’ homes and lives. Lorraine interjected, and though it might seem like a contradiction, it was her way of getting to the root. “That is all true,” she said, “but I am not worried about black men—who have done splendidly, it seems to me, all things considered.” Jimmy remembered a pregnant pause, and her words “But I am very worried . . . about the state of the civilization which produced that photograph of the white cop standing on that Negro woman’s neck in Birmingham.” She smiled a cutting smile at the attorney general, turned, and walked out. Most of the others followed.

Jimmy wrote more than once about this meeting. In each ac­count, Lorraine was magnificent. But just as she was at once tower­ing and childlike, she was both mighty and vulnerable. This struck him deeply. He returned to it in the way Thelonious Monk would go back to a song he wanted to turn over in his head, to see it for all its beauty and majesty. That was how Jimmy saw Lorraine. And re­membered her. After the meeting was over, he wrote,

I had forgotten that I was scheduled to be interviewed by Dr. Kenneth Clark, and we were late. We were hurried into the car. We passed Lorraine, who did not see us. She was walking toward Fifth Avenue—her face twisted, her hands clasped before her belly, eyes darker than any eyes I had ever seen be­fore—walking in an absolutely private place.

I knew I could not call her.
Our car drove on; we passed her.
And then, we heard the thunder.

Years later, in recollection, her posture was ominous, but it fol­lowed a moment that would become legendary. Small but overtaking a room, hers was a presence much greater than her remarkable attrac­tiveness, stylishness, and poise. It was a presence beyond the expecta­tions of her role, her place, her celebrity. She gave public voice to her belief that the Black working class were at the center of the struggle for liberation, and that she must be an amplifier not a figurehead. That was something for which Robert Kennedy was not prepared.

Though RFK was reported to have considered the meeting a great waste of time, less than one month later, his brother President Ken­nedy, at RFK’s urging, gave his landmark civil rights address during which he proposed the legislation that would be known as the Civil Rights Act of 1964. In the address, JFK spoke of civil rights as not just a legal issue but also, as Lorraine said, a moral one.