The Bornean orangutan population has fallen by nearly 150,000 in just 16 years

Deforestation for palm oil, found in many foods and consumer goods, is pushing the orangutan to extinction 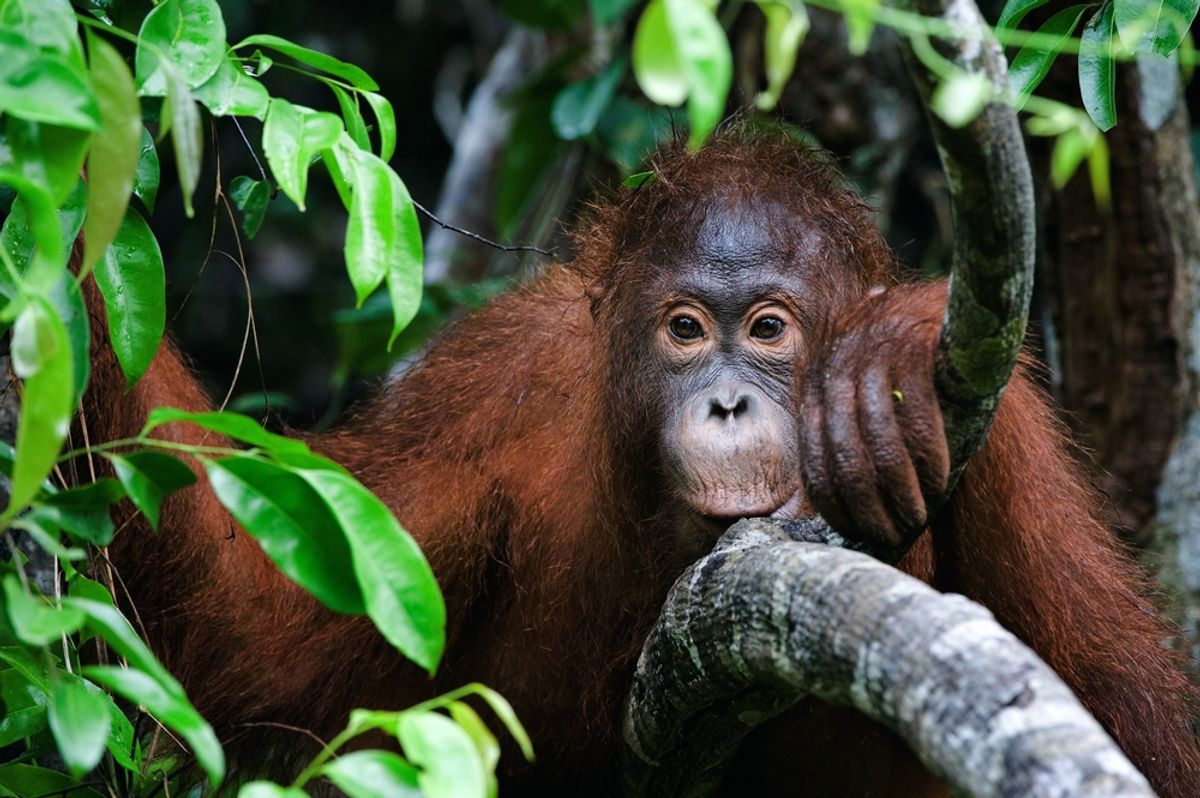 This article was produced by Earth | Food | Life, a project of the Independent Media Institute, and was originally published by EcoWatch.

At the end of September, four rescued orangutans returned to their home in the rainforest after undergoing lengthy rehabilitation at International Animal Rescue’s (IAR) conservation center in West Borneo, where I work as a chief executive. Amy, Kepo, Ongky and Rambo had been rescued by our Orangutan Protection Unit at various times during the previous eight years. They then joined 100 other orangutans at the center being meticulously prepared for life back in the wild by our dedicated team of vets and caregivers.

The majority of the orangutans at our center are victims of the illegal pet trade. They have all suffered terrible cruelty and neglect after being taken from the wild as babies. They likely saw their mothers being killed as they fought to protect their infants. The traumatized young orphans were then sold or kept as pets by their captors, often living as part of the family until they grew too big and strong to handle. Then they were chained or cooped up in small wooden crates and soon forgotten, left to languish in misery far from the forest where they belong.

Amy’s story is a typical one. She was being kept as a pet by villagers in Jambi, Sukamarau, in Central Borneo. When our rescue team found her, she was slumped in a dark wooden cage with a heavy chain around her neck. She was thin, dirty and depressed, and her brown eyes gazed blankly at Dewi, our vet, when she approached her. Poor Amy had nothing but a filthy piece of old cloth in her cage to comfort her.

Amy’s rescue was the first step on her journey to a new life. After spending eight weeks in quarantine, she was given a clean bill of health by the veterinary team, and her rehabilitation could begin. At 6 years old, she was too big to go to school for baby orangutans and so entered the next stage of rehabilitation at our center — forest school. Here, among others of her own kind, Amy gradually developed the skills she would need to survive in the wild. She spent her time climbing and moving around in the trees, foraging for food and building a new nest each night to sleep in. Our monitoring team gathered data on her progress, reporting that she was a fast learner, was making excellent progress and would soon be a candidate for reintroduction into the wild.

The day of her release was a joyful one. It is so uplifting to see an orangutan return to their rightful home in the forest. It makes all the team’s hard work worthwhile. At the same time, however, everyone at IAR is acutely aware that our work rescuing, rehabilitating and releasing orangutans only addresses the symptoms of the problem but not the problem itself. Habitat loss and illegal hunting are the primary causes of the decline in orangutan populations.

Rapid and relentless deforestation for industrial-scale agriculture, particularly palm oil and timber plantations, leaves orangutans without food and shelter, exposing them to hunters who kill orangutans and capture their babies to sell as pets. The apes are also in danger of coming into conflict with local people as they stray into villages and onto farmland in search of food. Fires started on an annual basis as part of land clearance operations in Indonesia are also responsible for the loss of thousands of acres of rainforest and the lives of hundreds if not thousands of orangutans.

In 2016, the Bornean orangutan joined the Sumatran orangutan on the International Union for Conservation of Nature’s Red List of ThreatenedSpecies, an indication that the species is coming perilously close to extinction. Further evidence of the population’s decline came in a report published in the journal Biologyin February this year. Its authors concluded that the Bornean orangutan population had fallen by 148,000 between 1999 and 2015 and now stands at between 70,000 and 100,000 individuals. The numbers could fall by at least another 45,000 in the next 35 years, the conservationists predict. What, then, can be done to pull the orangutan back from the brink of extinction?

In addition to supporting the work of groups fighting to save the orangutan, we conscientious consumers can all ensure our choices and purchasing habits are not contributing to the orangutan’s desperate plight. “Buyer beware,”as the saying goes,More than 50percentof groceriescontain palm oil, from toothpaste and shampoo, to ice cream and pizza. And it’s frankly impossible to know for sure from a label whether something has genuinely been ethically and sustainably produced.

None of us wants the orangutan to pay the price for our lifestyle choices, and therefore it’s better, wherever possible, to shop locally and steer clear of items whose origins are unclear. It is, after all, better for the environment as a whole — and better for our own health — to consume products grown closer to home thatdon’t leave a giant carbon footprint on the planet as they travel to reach us.

Further action we can all take to help our critically endangered cousin is to raise awareness among friends, family and colleagues of theirplight. And raising the alarm about the threats facing the species couldn’t be easier thanks to social media.

The name “orangutan” is derived from the Malay and Indonesian words orang meaning “person” and hutan meaning “forest.” What a tragedy it would be to let this precious “person of the forest” vanish from the face of the Earth forever. But if we all have the will and determination to step up and prevent that from happening, I do believe we still can.

Alan Knight is the chief executive of International Animal Rescue, a UK-based animal welfare nonprofit. Alan was made an officer of the Order of the British Empire in the Queen’s Birthday Honours List in 2006 for his services to animal welfare.