Donald Trump's shutdown theater: It's ludicrous, but not entirely clueless

Despite historic losses in 2018, Trump thinks he only needs the GOP base to win. They love shutdown theater 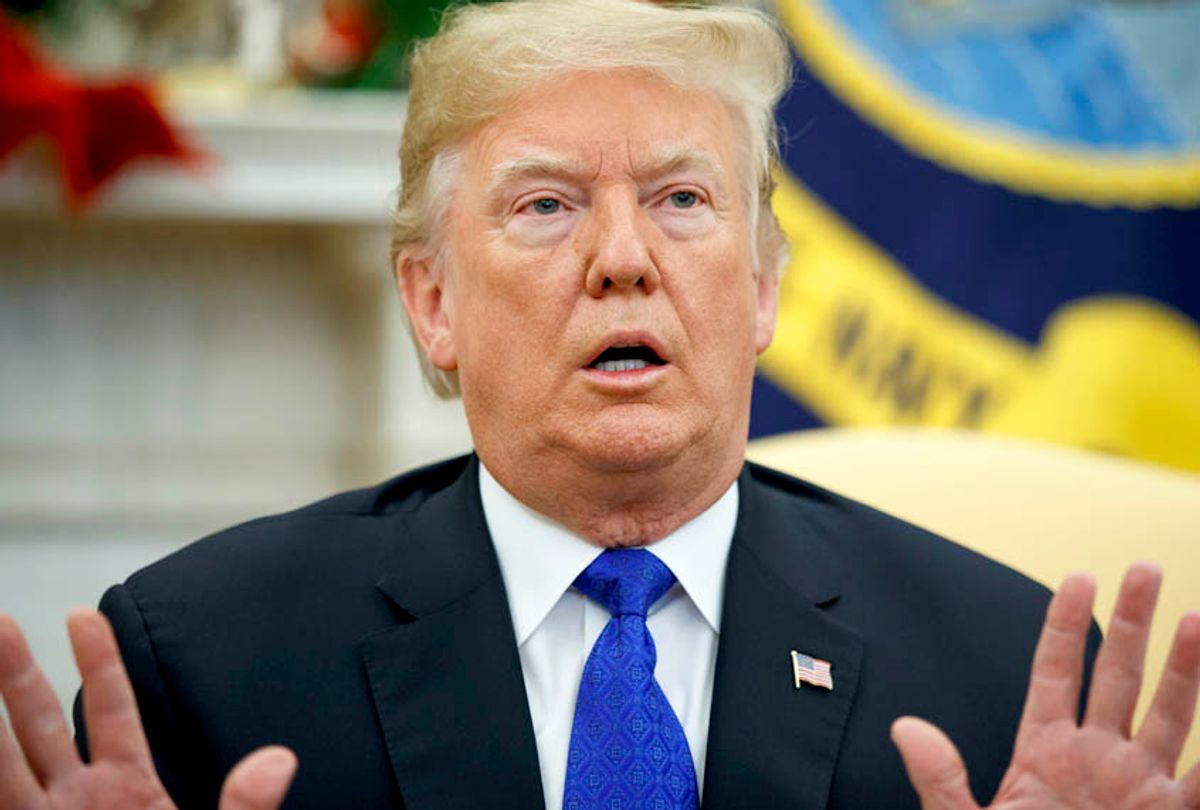 President Donald Trump speaks during a meeting with Democratic leaders the Oval Office of the White House, Tuesday, Dec. 11, 2018, in Washington. (AP/Evan Vucci)
--

On Tuesday, Donald Trump, always treating his presidency like a reality TV show, decided at the last minute, to roll TV cameras into the Oval Office for a meeting with likely House Speaker Nancy Pelosi, Senate Minority Leader Chuck Schumer and human house plant/Vice President Mike Pence. Trump no doubt thought he'd appear like a masterful dealmaker, à la "The Apprentice." But without the scripted catchphrases and tireless editing team he used to rely on, he instead came across as the petulant man-baby he is, whining about his border wall and bickering with Democrats in a manner that Pelosi memorably described as a "tinkle contest with a skunk."

The big news from the meeting was that Trump pompously declared that he would force a government shutdown to try to force Democrats to fund a wall along the U.S.-Mexican border -- and that he'd personally take credit for doing so.

"I will take the mantle. I will be the one to shut it down," Trump also said, just in case there was any doubt.

This was widely regarded as a gaffe by the political media. Government shutdowns are unpopular with the public, hence there's a widespread assumption that both political parties want to pin the blame on the other in the event of a shutdown, or even the realistic threat of one. Indeed, as Jonathan Allen at NBC News reported, a number of Republicans aren't keen on Trump's government shutdown tactics, worried all this theater will further erode their already dim reputation with the public.

But the grim truth is that Trump isn't just shooting from the hip. Sad to say, he is actually working a strategy, and it's the one he's become ever more committed to over the past two years: Play to the base and win over the yahoos at Fox News. Right-wing pundits and Trump base voters love the idea of shutting down the government, and they don't even really care why.

For decades now, the right wing media has been dishing out a steady diet of anti-government propaganda aimed at racist white voters, portraying the "federal government" as an illegitimate institution set up to steal money from white people and give it to lazy minorities and immigrants. Sometimes there's some griping about "nanny state" regulations thrown in for good measure, but mostly it's just the race-baiting that gets the right-wing base going.

In this propagandistic worldview, all the other job duties of the federal government — the military, Medicare and Social Security, environmental protection, infrastructure maintenance and any social spending that affects white people or the middle class in general — is seen as part of some other government, not the one that Rush Limbaugh and Fox News have carefully trained their cantankerous audiences to loathe.

Sure enough, the right-wing propaganda troops were eating up this "shut down the government" talk. Tomi Lahren was crowing on Fox Nation that a "good old-fashioned government shutdown spanking might be exactly what our politicians need."

Fox News host Laura Ingraham heavily championed a shutdown in a rant where she compared Spanish-speaking immigrants to "raw sewage" and said that if Trump doesn't build a wall, "we've lost the country anyway."

Lou Dobbs, on Fox Business, declared that ordinary citizens won't even notice if the government shuts down because the "principal beneficiaries seem to be the estimated 22 to 30 million illegal immigrants in the country" and that no one else "depends" on government. (Here's a pro tip, Lou: The actual number of undocumented immigrants in the U.S. is less than 12 million.)

While other Fox personalities weren't quite as blunt, this idea that a shutdown only affects the "bad" government of right-wing propaganda -- the government that hands out welfare checks to racial  minorities and pays government employees to sit on their butts doing nothing -- was repeated by familiar faces.

Ingraham, for instance, declared that a possible shutdown wouldn't affect "the military or any essential services."

Sean Hannity, on his radio show, also declared that "essential services all continue" under a shutdown, saying, "Everyone gets their social security check, vets hospitals stay open, our Defense Department is up and running, and intel services," while bureaucrats "get a free vacation."

All of this is a lie, and not just the racist propaganda about welfare. As the Department of Defense said in a press release in April, sequestrations from past government shutdowns launched by self-dramatizing Republicans have meant that "facilities have degraded significantly from reduced investments, and the department has a $116 billion backlog in facilities requiring attention." So even if soldiers' salaries keep getting paid, the reality is that the military suffers quite a bit from shutdowns.

Unfortunately, however, this anti-government propaganda blitz, which has intensified over the decades, has worked. A recent NPR/PBS poll conducted by the Marist polling organization shows that while most Americans reject this government shutdown theater Trump is conducting, 65 percent of Republicans support it.

Trump's theory of politics has become clear: He believes that he wins by pandering to a racist, easily bamboozled minority of Americans -- and that Republicans don't need anyone else to win. He got this into his head after he won the election despite losing the popular vote by an eye-popping 2.8 million votes, due to massive structural advantages that give disproportionate power to voters in rural, low-population states. Since then, he and the Republican Party in general have doubled down on gerrymandering and voter suppression tactics, with an eye toward maintaining political power while appealing entirely to a shrinking minority of white voters in exurban areas.

The 2018 midterms demonstrated the limits of that strategy, which is why Trump was forced to sit down with a Democratic woman who is nearly certain to be the next House speaker. But Trump isn't the sort of man whose ego will allow him to believe he was ever wrong, so he's digging in his heels and insisting that all he needs to do is pander to a declining, embittered minority who swim in a sea of racist misinformation about immigration and federal spending. Let's hope that will prove to be as wrong-headed a strategy for 2020 as it was in 2018.