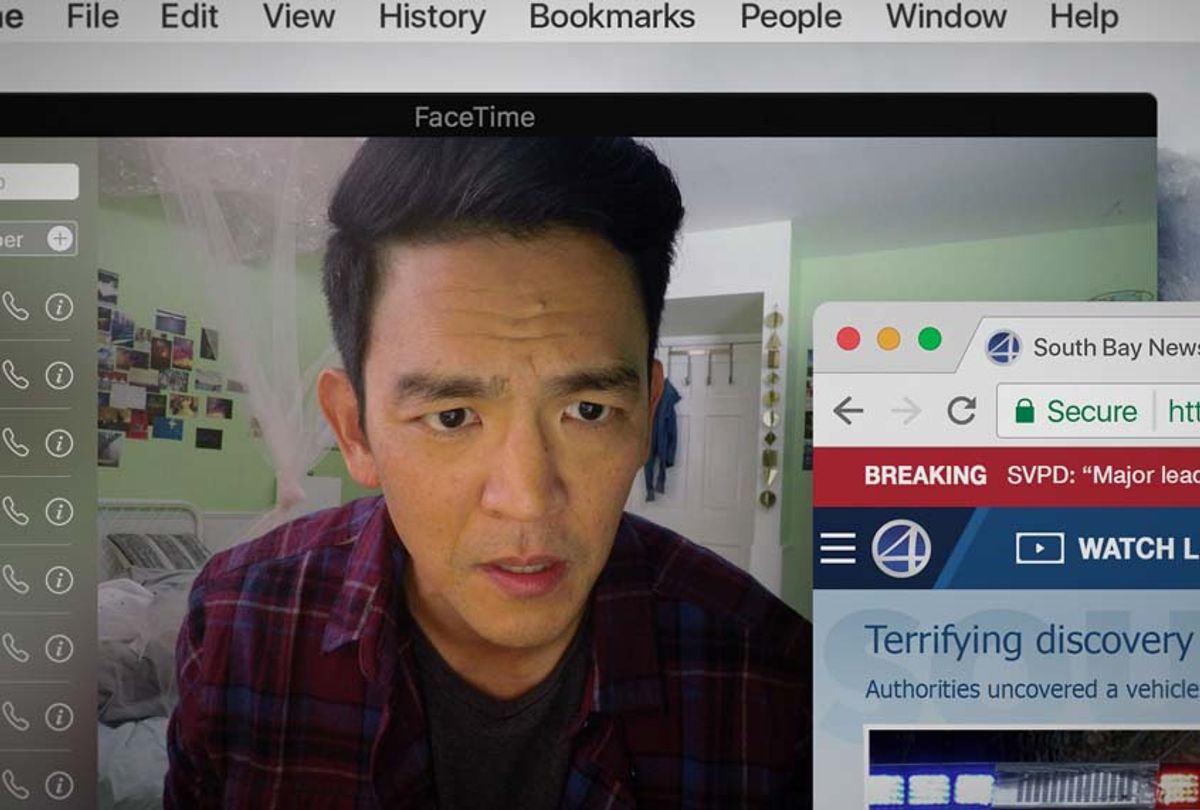 The technological demands of Aneesh Chaganty’s feature directorial debut “Searching” were profound. A computer-screen thriller that unfolds on various displays, zinging from laptop to laptop and back again, Chaganty’s film required a canny handle on technology and the way it looks and moves, but it also needed an actor able to root the family-centric film in emotion and humanity.

That came from the inspired casting of the always-reliable John Cho as David Kim, a recent widower who must use all his smarts (and a ton of literal screen time) to find his missing teenage daughter Margot. The “Star Trek” and “Columbus” actor delivered, turning in a nuanced performance in a film that could have been dominated by on-screen wizardry.

While a film like “Searching” could impress by virtue of craftsmanship and technology that makes it feel so contemporary and true-to-life — this is the rare internet-centric film that utilizes existing apps and websites, no weird “Facebook” knockoffs here — the casting of Cho allowed Chaganty’s feature to tap into modern sensibilities in another way. Cho, a Korean-American actor, has always mixed up his roles, from those that hinge on his cultural background (from the “Harold and Kumar” films to Justin Lin’s “Better Luck Tomorrow”) and those that don’t (like Kogonada’s “Columbus” and his early supporting work in the “American Pie” series).

“Searching” fell under the latter categorization, a film in which Cho’s race wasn’t baked into the narrative and a colorblind casting that he’s hoping to see more of in Hollywood.

“When you’re shooting, it’s all about, ‘Does this moment work? Will people understand this? Are we telling that story correctly?,'” said Cho. “But, particularly after Sundance, I began to think about what this movie meant. For me, it’s like the movie behaves as if we’re past all the firsts, you know what I mean? We’ve sort of had the discussion and we agreed that it’s okay for an Asian to be in any kind of movie and this is the movie that’s been made. To me, it’s like a movie from the future in that regard.”

Read more IndieWire: Unlocking a Sundance Success: Why ‘Searching’ Was the Biggest Acquisition of 2018

The film premiered under the title “Search” at the 2018 Sundance Film Festival, where it was quickly picked up by Sony’s Screen Gems arm. The studio released the indie in late August, where it went on to make more than $70 million worldwide. Not bad for a film that reportedly cost about $1 million to make. Cho’s recent Indie Spirit nomination for Best Male Lead, pitting him against contenders like Ethan Hawke and Joaquin Phoenix, took him by surprise, but it also reminded Cho of just how exceptional the film has proven to be.

“I didn’t know that I was in the mix, I didn’t know that was possible,” he said. “So that was a total surprise. I feel like it legitimized our film, which could be seen as sort of adjacent to horror, which I think is a completely legitimate genre but also sort of ignored by critics. Our movie is so unusual that it might not even look like a traditional independent film. It certainly doesn’t look like a traditional studio film, but it’s so unusual in its look that I didn’t think people would see it as what we’re supposed to expect of independent cinema.”

“The problem was I didn’t have any people to look at for the most part, and that was extremely difficult for me, to feel like I was connected,” Cho said. “I think you rely on looking into another soul to verify that you’re connected with that person and make the scene authentic. … I felt like I had to develop a much more intimate relationship with the director. I had to rely on him for the geography of the screen, because they were all plot points and everything was all these micro movements that were so important. Whereas on a traditional set, I think my strongest relationships are with the actors, on this one my strongest relationship was with the director. We just had to become very close.”

Cho is eager to deflect praise to not only Chaganty, but also to the rest of the creative team that made his performance look so good inside a universe that was created and constructed long after he had filmed his scenes.

“There’s a world in which all of the graphics don’t look that good,” he said. “I was very happy when I saw the film, it was so thought out. I was really so deeply impressed the time put into those web pages and the depth of characterization. A really glancing scroll through Facebook represented so much thought, because you’ll see five profiles and each profile was a different photograph they had to take and they had to decide on a pose and different likes and dislikes and all that stuff. It just has a real respect for characters.”

While computer-screen films haven’t yet exploded as a singular genre, there have been other success stories, like the horror franchise “Unfriended” and Timur Bekmambetov’s thriller “Profile.” (Bekmambetov also produced “Searching” and has been vocal about his dedication to making a ton more screen films in the coming years.) For Cho, the recent uptick in such films has been a matter of not only technology catching up, but also the public understanding how it can all work as entertainment.

“I don’t think we could’ve made this movie even five years ago, because there was like the collective vocabulary of the public wasn’t there when it came to our computer literacy,” Cho said. “Now it’s there, but because we’re all caught up, you have to be sharp and you have to be real and you can’t do anything false. You can’t make false movements in that zone. … I feel like moving forward, there will be so many more screens presented in films. I think it’ll be a separate department.”

Cho also thinks the tide is turning when it comes to the other kind of on-screen representation that “Searching” so easily utilized. Recent blockbuster successes like “Black Panther,” “Get Out,” “Hidden Figures,” and “Wonder Woman” prove that diverse films can make a lot of money, while a 2017 study crunched the numbers and came to the same conclusion.

Read more IndieWire: Lynne Ramsay Made the Boldest Directing Choices of 2018, So Why No Oscar Buzz?

“I think it’s just the age, this is a guess, but it’s the age of the people who control the pursestrings,” he said. “I think with the fracturing of the film business’ economy, there’s not really an incentive to be false about representation. I think the incentive is to be more authentic, more real, and represent more accurately what’s happening in society. I’m kind of bullish on the future now in a way that I wasn’t even five to 10 years ago.”

With over 20 years of acting experience, Cho resists the idea that he’s gotten more picky as his star has risen. Instead, he offers that his success comes from something more personal, the kind of emotional intelligence that made his work in “Searching” so compelling.

“I feel like it’s more being older and being comfortable with leaning into my instincts and looking for things that speak to me on a personal level,” he said. “That’s what it is now. It’s not so much being choosy as it is following my heart on these things. Sounds false, but it really isn’t. I’m trying to be less strategic about things and not ask the question, ‘What should I be doing next?,’ but I find myself asking the question, ‘What connection do I have to this material? How can I contribute?’ ”

He added with a laugh, “I’m gratified to say that I feel like that not thinking about the career has paid off in the sense that it’s been good for my career.”

“Searching” is available now on Digital, Blu-ray, and DVD.