Every week, this brutality becomes more normalized and we do nothing to stop it. Time to say: Not in our name 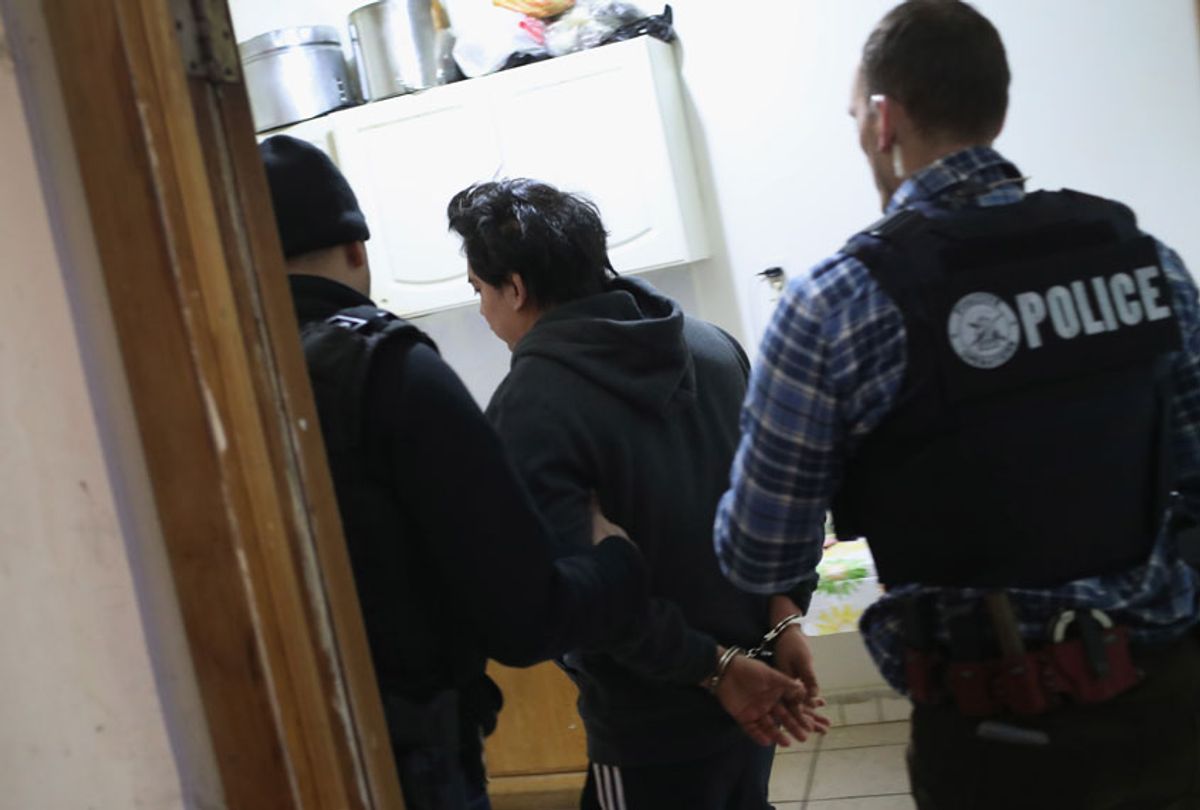 U.S. Immigration and Customs Enforcement (ICE), officers arrest an undocumented Mexican immigrant during a raid in the Bushwick neighborhood of Brooklyn on April 11, 2018 in New York City. (Getty/John Moore)
--

To be silent in the face of evil is to be complicit. Once again, the Trump administration has shown us that cruelty is its official public policy, and that it understands power only as a force to cause harm, almost never as a force to do good.

Donald Trump's "family separation policy" was intentionally designed to destroy families and subsequently exile babies and children into a labyrinthine bureaucracy and Kafka-like judicial system where, in 21st-century America, three-year-old children are forced to testify in court and held in concentration camps.

In another stain on America's reputation and honor, Donald Trump's ICE enforcers are now arresting and deporting the people who answered the call to help refugee and immigrant children -- the latter being without parents largely because of  Trump's own commands.

On Wednesday Wonkette reported on the Trump administration's use of children who have been separated from their families as "collateral for even greater acts of evil":

The friendly folks at US Immigration and Custom Enforcement (ICE) announced Tuesday that federal authorities have arrested 170 immigrants who came forward to sponsor migrant children in government custody. This is the result of a new, fun rule the Department of Homeland Security put into effect this summer. It allows immigration authorities to examine the criminal background and legal status of anyone who attempts to sponsor the unaccompanied minors — usually parents or close relatives already in the country. They can even check the papers of any other adults living in their home, including Grandma.

It's a masterclass in evil: Use defenseless children as bait to lure immigrants to the authorities. It's like when scofflaws show up at police headquarters to collect their "free prize," which is actually just jail. Of course, this is far more repulsive because the government is preying on immigrants' concern for the well-being of their family members.

CNN also noted that ICE had arrested 41 people in September "who had come forward as sponsors for minor children in government custody. ... It was the first time ICE confirmed it was arresting potential sponsors of children in government custody for potential immigration violations. The individuals could have been the children's parents or family members, and they also could have merely been fellow members of the homes of adults who applied to care for the children as they fight for a legal right to stay in the US."

This is part of a much larger strategy of terror by Trump's ICE foot soldiers against entire communities.

ICE enforcers have arrested people at weddings and during immigration-status hearings. As most recently seen with the case of Vietnamese refugees, some people who have lived in America as productive and contributing citizens for decades may now be subject to deportation under the Trump administration.

Activists who dare to speak out against the Trump's administration's immigration policies are targeted by ICE enforcers.

America is now a country where there are safe houses and underground networks that provide aid and comfort for undocumented residents and other people who are hiding from ICE.

For people of conscience this is an American dystopia. But it is a source of considerable glee for Trump's supporters: Public opinion polls and other research consistently shows that they support the president's war on nonwhite immigrants. Such sentiments are especially intense among white evangelical Christians. For them it would seem that the Bible's instructions to be kind to travelers and strangers does not apply to nonwhite people or citizens of other nations.

In the midst of this suffering, it is not hard to imagine Donald Trump laughing at those people he has called "snakes," "terrorists," "rapists" and "invaders" as they are seized by ICE enforcers and put in jails or concentration camps.

Other members of Trump's political coven, his witches and warlocks of  nativism and racism, are likely laughing as well. Stephen Miller, Michael Anton and the other racists in Trump's orbit are enjoying all the pain they have caused to nonwhite people in the 2 years since Trump stole the 2016 election.

In the age of Trump it is understandably tempting to summon Hannah Arendt's observations about the "banality of evil." But there is another text that has much to teach us about American fascism and the way that cruelty infects a people and then becomes normalized.

In his classic 1955 book "They Thought They Were Free," Milton Meyer documents what life was like for "regular Germans" under the Nazi regime. Meyer includes the following warning about how evil is normalized in a society:

But the one great shocking occasion, when tens or hundreds or thousands will join with you, never comes. That’s the difficulty. If the last and worst act of the whole regime had come immediately after the first and smallest, thousands, yes, millions would have been sufficiently shocked — if, let us say, the gassing of the Jews in ’43 had come immediately after the ‘German Firm’ stickers on the windows of non-Jewish shops in ’33. But of course this isn’t the way it happens. In between come all the hundreds of little steps, some of them imperceptible, each of them preparing you not to be shocked by the next. Step C is not so much worse than Step B, and, if you did not make a stand at Step B, why should you at Step C? And so on to Step D. ...

And one day, too late, your principles, if you were ever sensible of them, all rush in upon you. The burden of self-deception has grown too heavy, and some minor incident, in my case my little boy, hardly more than a baby, saying ‘Jewish swine,’ collapses it all at once, and you see that everything, everything, has changed and changed completely under your nose. The world you live in — your nation, your people — is not the world you were born in at all. The forms are all there, all untouched, all reassuring, the houses, the shops, the jobs, the mealtimes, the visits, the concerts, the cinema, the holidays. But the spirit, which you never noticed because you made the lifelong mistake of identifying it with the forms, is changed. Now you live in a world of hate and fear, and the people who hate and fear do not even know it themselves; when everyone is transformed, no one is transformed. Now you live in a system which rules without responsibility even to God. The system itself could not have intended this in the beginning, but in order to sustain itself it was compelled to go all the way.

When will the American people finally say, "Enough! Not in my name!"

What ICE does may be "legal" as we currently define that term. But it most certainly is not right, moral or just. The inaction of the American people is a kind of endorsement through silence, and therefore a form of complicity.

Unfortunately, the American people under Donald Trump are now part of an ignoble global legacy where evil is increasingly normalized and massive public resistance is absent. How will we redeem ourselves? Is that still possible?