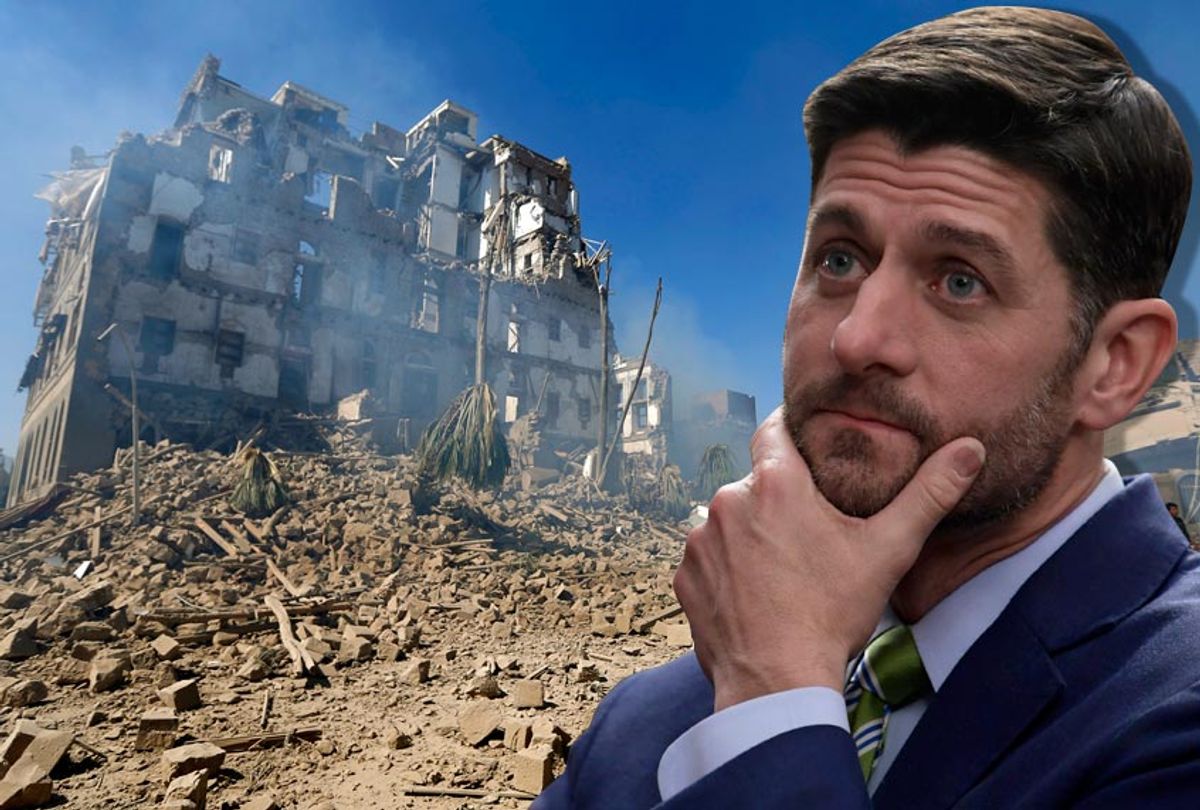 The Senate finally found its spine this week. But just as Mitch McConnell steadied his wobbly feet to stand up to Donald Trump, Paul Ryan swooped in to undercut one of the only real acts of Republican resistance in two years of galling fecklessness.

For the first time since it was passed during the depths of the Vietnam War quagmire, a chamber of Congress used the War Powers Act to serve as a check on the executive branch this week. Some of the Senate’s most conservative members voted on Wednesday for legislation co-sponsored by Vermont Sen. Bernie Sanders that would have ended U.S. involvement in Saudi Arabia’s three-year-long bombing campaign in Yemen.

The very next day, the Republican-led Senate voted unanimously for a non-binding resolution to condemn Saudi Crown Prince Mohammed bin Salman for the killing of journalist Jamal Khashoggi. The pair of foreign policy rebukes came in the same week that one Republican joined with Senate Democrats to narrowly pass a resolution to stop the Trump administration’s attempt to loosen rules that require “dark money” nonprofit political groups to disclose donor names in tax returns.

A slow clap for the Senate, if you’ll allow.

To be fair, this is not the first time McConnell has allowed his caucus to flex back at the White House, even in the face of Trump’s bluster. The annual defense appropriations bill, which sailed through the Senate in a bipartisan vote earlier this year, included a provision that blocked the Trump administration from scrapping tough penalties on the Chinese telecommunications firm ZTE. The next month, the Senate passed a non-binding resolution aimed at rolling back Trump’s authority to impose national-security tariffs. McConnell even spoke out against the president’s shameful family separation policy for migrants detained at the U.S.-Mexico border earlier this year.

"[I]t is important for Congress to signal that there is no excuse for recent Saudi behavior,” Republican Sen. Lindsey Graham, a fierce ally of Trump, wrote in the Wall Street Journal.

But just as the effort to speak out against Trump’s silence on the Saudi regime began to gain steam in recent weeks, the House attached a rule forbidding any vote to end U.S. military support for the Saudi war in Yemen before the end of this year to the totally unrelated farm bill. This is how Paul Ryan will be remembered in his final weeks as House speaker.

The House Rules Committee, who members are hand selected by Ryan, could have required that any amendments to the must-pass farm bill remained germane. Instead, Ryan not only abdicated his constitutional duty to debate and vote on the nation’s wars, he also abridged that role for his entire chamber as one of his last deeds as its leader. Eighteen House Republicans voted against the Yemen resolution, but the House still advanced a farm bill that prevented even debating the U.S. role in one of the worst humanitarian crises on the planet by three votes.

Every Congress spends two years carefully crafting a farm bill, and this one would not have automatically gone down  if the Yemen resolution had been defeated. The final version was ultimately another failure for Ryan. As Politico reported it was "stripped of every controversial proposal the House GOP wanted on food stamps. The most significant concession was on an effort to impose stricter work requirements on millions of able-bodied adults who receive benefits." Still, Ryan did Trump’s bidding by thwarting the effort to assert the war-powers authority of Congress, thereby continuing to shirk his full duties under Article 1 of the Constitution.

Ryan did, after all, tell the world he didn't really want to be speaker of the House. So it stands to reason that he would then fail at the job, and effectively abandon the speakership before he had really ever started.

“Let’s be frank: The House is broken,” Ryan said in his first speech as Speaker. “We are not solving problems. We are adding to them.”

But aside from the debate of whether his tenure will be viewed as merely a failure or if his legacy will be that of a fraud, Paul Ryan is perhaps most striking as the most disappointing politician of the millennium — if only for the bipartisan buildup from which he benefited for years. While anyone who is not a mainstream pundit or conservative ideologue was less impressed by Ryan’s resuscitation of Ayn Rand’s writings, it’s now clear to all that his lone success after two decades of harping about the need to reduce the national debt has been corporate tax cuts.

Every single budget Ryan ever proposed as speaker has increased the national debt. The 2013 “Ryan budget,” before he was coerced into succeeding John Boehner, was projected to reduce federal revenue by nearly $6 trillion over a decade. Despite enjoying GOP majorities on both sides of Capitol Hill for nearly two-thirds of his term as speaker, Ryan could not deliver on major Republican promises like defunding Planned Parenthood and building a wall on the U.S.-Mexico border. While the House of Representatives did manage to pass a bill repealing Obamacare, it failed in the Senate because it would have allowed insurance companies to discriminate against people with pre-existing conditions. Ryan went on to see his party lose 40 seats in the House during the midterm election.

I remember the “Young Guns” article in the now defunct Weekly Standard years ago that lauded a crop of new conservative ideologues rising in the House, ready to clean up after the RINOs who had tarnished the Republican name in the George W. Bush era. (Never mind that Ryan gleefully backed Bush’s budget-busting tax cuts.) The only one still standing now is California’s Kevin McCarthy, a close Trump ally who will serve as minority leader in the next Congress. Under his speakership, Ryan watched as 45 members of his majority decided to quit just as they gained control of the whole game in Washington.

It is merely an excuse to say that too many of Ryan’s members feared Trump’s popularity in their districts, and particularly among their primary electorates, for him to control his caucus. This week’s shameful Yemen vote shows that he could have maneuvered the rules structure to defy Trump without forcing a confrontation. As is exemplary of his entire tenure atop this do-nothing House, he just never wanted to.