What dangers lurk in your stadium food?

An ESPN investigative report reveals much of the food served at sporting arenas is unsafe, some of it is disgusting 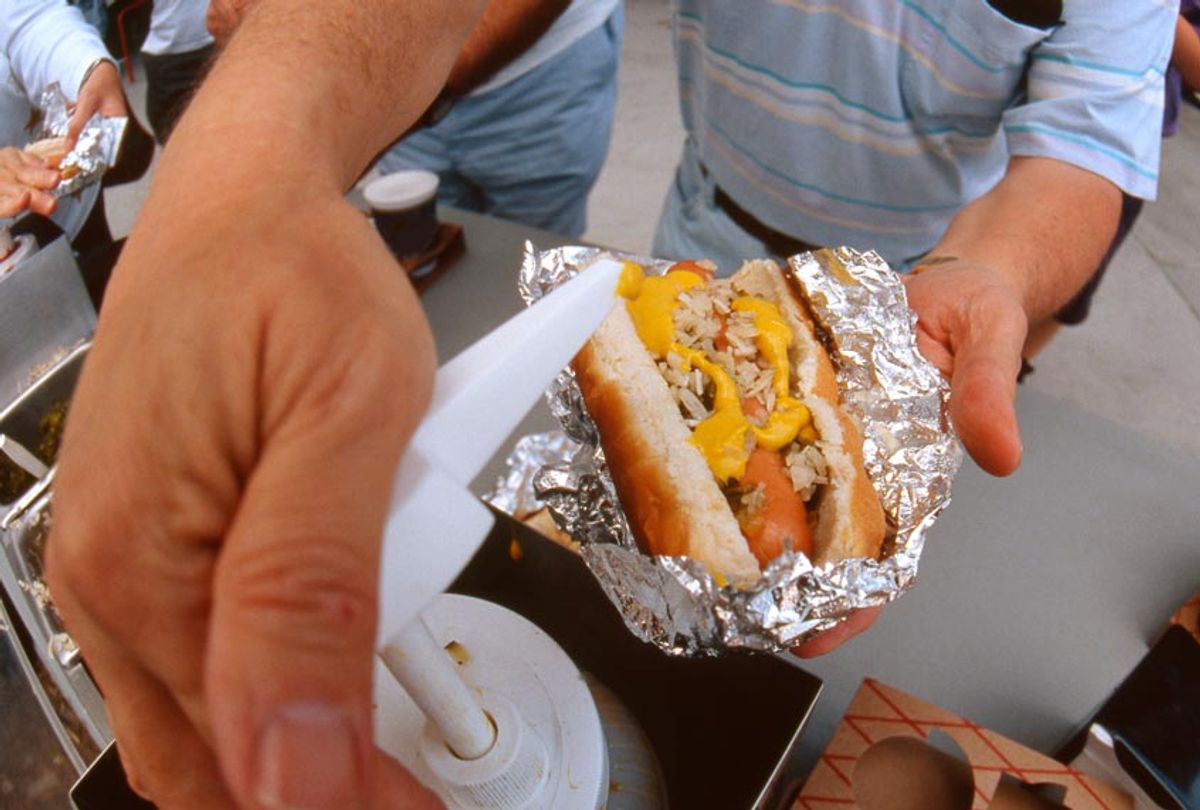 Last month at Red Bulls Arena in Harrison, NJ, I ate a hotdog that made me profoundly sad. As hot as molten rock, it emerged from its foil bag gray and joyless and horrifyingly damp. I applied a copious blast of mustard and ate it all the same. The line had been intolerably long at the concession. What, I reasoned, were the chances that I could find anything better? After choking down the horrid weiner I vowed, once again, that I would never eat at a sporting event again. Last week, I learned from an exhaustive (and exhausting) report from ESPN Outside The Lines, I should be happy I'm not dead.

Turns out, not only is much of the food served in stadiums across the country achingly mediocre and absurdly expensive, it's often also dangerous to eat. The results of the investigation will make NFL, MLB, NHL or NBA fans who regularly consume food at any of the nation's 111 pro sporting arena's think twice. During 2016-2017, inspectors discovered high-level health violations at 28 percent of these stadiums, and these violations weren't found at just one concession among the dozens in every arena. When high level violations (the really gross stuff) were found, they were found in fully half of the venues selling food and beverages — everything from rats, roaches and other vermin in and around the food, to  cross contamination from careless storage like burger meat dripping on the lettuce stored beneath it, to members of the crew wiping their faces (you know, noses, mouths) and then preparing or serving food. In the worst cases, conditions in nearly all of the concessions were a threat to human health.

According to ESPN, the highest rates of violations were found at Spectrum Arena home of the Charlotte Hornets, the Detroit Pistons' Palace of Auburn Hills and American Airlines Center where the Dallas Mavericks play. Among these three,  grim violations were found  in a range between 83 and 93 percent of the concessions where food an beverages are served.

Unlike restaurants where health inspections are conducted at any time while the business is open, due primarily to security concerns limiting access to arenas, health inspectors must make appointments ahead of time to review operations and working conditions. "Those arenas know when they’re getting inspected, so not getting it 100 percent right every time is completely unacceptable," says chef,  restaurant consultant and avid sports fan, Josh Eden. "What you should be doing is working correctly so that you’re ready to pass inspection every minute of every day," he continues.

Eden says that even some of the most disturbing violations can be the result of accidents and half measures. Selling food at arenas is a $2 billion annual business but the margins are tight. The work force is typically part-time, sometimes seasonal and rarely well-trained in food safety. "I have never seen any sense of urgency from those people serving food, so there's no way anybody is concerned about whether that food is being served at a safe temperature," says Eden.

The problem isn't just the servers, the supervisors are often not as on top of their food safety game as the customer would like or the law requires. "You call up any arena in this country and you  ask to speak to the director of food and beverage. You ask that person who is in charge of food safety, I’m sure they don’t have the position. I’m sure they’re relying on chefs and managers to fill this role and those folks get crazy busy. Food safety has to be somebody’s Job Number One, or it will not get done."

Two of the most common sources of violations and illness spring from seemingly innocuous sources like cardboard and ice. "The thing that people don't understand is that cockroaches travel in and on cardboard boxes," says Eden, adding that deliveries that arrive in cardboard must be removed from the boxes and the boxes should be recycled immediately. "Cockroaches love cardboard, they prefer it for laying their eggs. So if you peek over that counter and you see cardboard boxes, especially if they are not broken down, that's not a great sign; maybe you should walk away.

"Tainted ice is probably one of the number one locations of cross contamination. Temperature is not a problem for mold. People think ice is too cold for mold. Wrong."

In America, food born illness makes 48 million people sick each year, 128,000 of those people get admitted to hospital; 3,000 die.

With food safety number like these, nobody would be blamed for skipping the offerings at sporting events altogether. If you insist on eating, Eden recommends ordering defensively. "I never eat from buffets. If there are three sliders left in a tray, all lonely, I’ll pass. Those hot dogs getting a little crusty around the bun? I skip it. I will probably not be ordering the chicken fingers anywhere."

Eden does eat arena food, though. "I like the cuban sandwiches at the Barclay’s Center because they run out of them, so those sandwiches are not sitting around." says Eden, who attends Nets games regularly at the Brooklyn arena that landed in the middle of ESPN's food safety survey, with violations at 63 percent of its concessions, including evidence of vermin and food served at unsafe temperatures. "A food-born illness is serious shit. Trust me, I know. If you have ever had one, you don’t ever want to be responsible for giving it to somebody else."