Rivers Cuomo loves that "SNL" Weezer sketch, even though he hasn't seen it 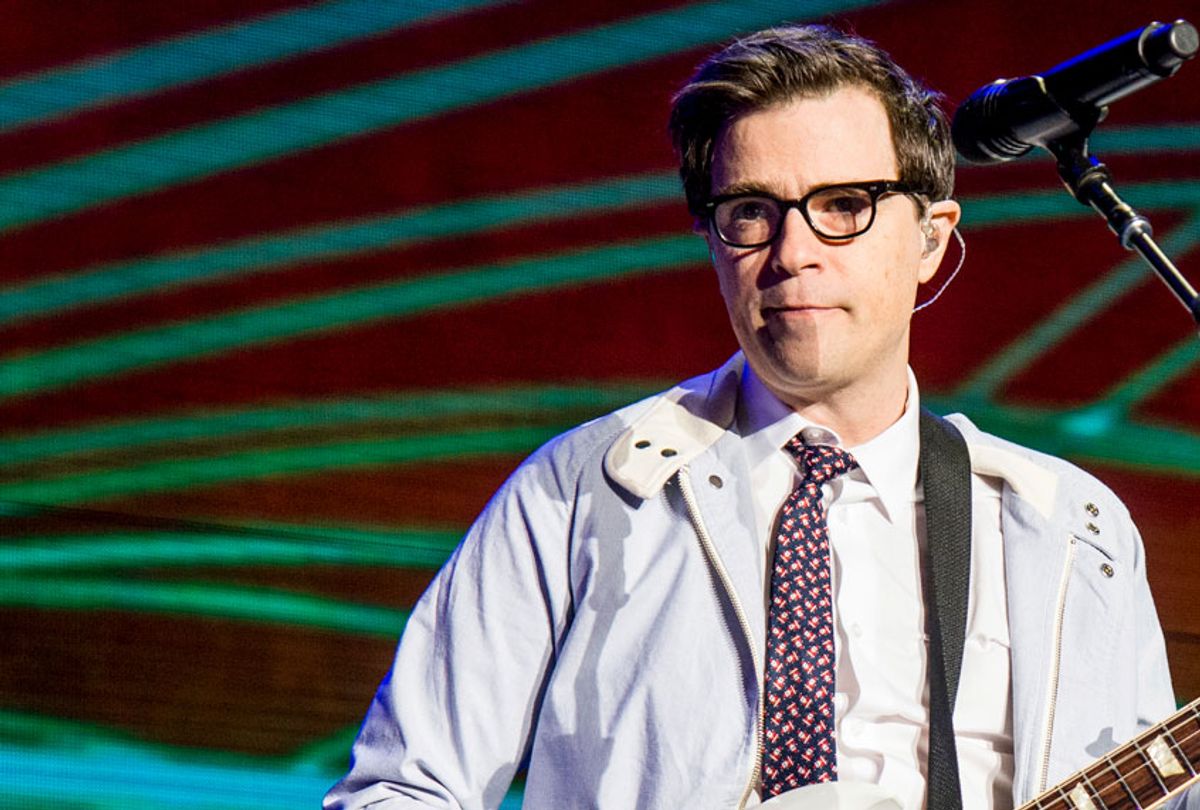 On Saturday, December 15th, Weezer frontman Rivers Cuomo got a text with some exciting news: The band’s manager, who happened to be in the audience at Saturday Night Live that day — “total coincidence,” Cuomo says — had learned that the show was preparing to air an entire sketch about Weezer.

In the extremely funny skit, Leslie Jones and Matt Damon get into a passionate dinner-party debate about the ins and outs of the alt-rock band’s 25-year-long catalog. Jones plays a dedicated devotee of Weezer’s first two albums only; Damon’s character, a self-styled “ride or die” fan, counters that Weezer’s later material is in fact their finest. “They really nailed it, right?” Cuomo says. “I still can’t believe it. It can’t be that big of an audience that would appreciate such a specific little niche as the Weezer fandom.”

The skit marks one more pop-cultural triumph for Weezer this year, following their surprise hit with a cover of Toto’s “Africa,” their well-received tour with the Pixies and their recent Grammy nomination for 2017’s Pacific Daydream. The SNL tribute, which sparked endless online conversation over the weekend, might be the most surreal of all those moments.

Read more Rolling Stone: Ed Sheeran Earned More on Tour In 2018 Than Anyone Else In 30 Years

One person who hasn’t seen it yet, though, is Cuomo. “Everyone’s been texting me and emailing me,” he says. “My mom saw it. But if there’s a specific moment you want me to comment on, you’d probably better describe it.”

At one point, Matt Damon says, “‘Pork & Beans’ is better than ‘Buddy Holly.'” What do you make of that?

Um….Everyone’s entitled to their opinion.

So you wouldn’t agree with that take?

[Long laughter.] It’s so deep, man! Who even knows what they’re talking about? I’m totally honored, but I hope people weren’t changing the channel.

It does seem like the sketch captured something about the way some fans feel about Weezer — this intense loyalty to specific parts of the catalog. Why do you think that is?

Well, let me ask you, as an outsider, do other artists have this kind of intensely opinionated and passionate and conflicted following?

I don’t think so. I don’t hear people having the same kind of debates about, say, Pearl Jam or Radiohead that they do about your band.

I wish I knew why. It’s almost worthy of an academic study to figure out what’s going on in the psyche of these few hundred thousand people. I feel like it must come back to something in the four of us, or something in me. There’s some character flaw or some quirk of my personality that is permitting a vacuum, where a normal band leader would be projecting some kind of stronger leadership. Or maybe he’d just be a more consistent artist stylistically.

Another possibility is that Weezer appeals to nerds, and nerds like to argue about their favorite things. I can think of similar debates about which Star Trek series is the best.

In our case, we’re real people. We’re not some fictional characters. So there’s nothing to argue about. But I like that. I would add that nerds also like to catalog and collect things, and put things in categories, and notice the tiny differences from one product to the next. It makes sense, because I’m a nerd. I was one of those people. I was obsessive about the bands and the movies I was into as a kid. I didn’t have as much information back then, but I did my best.

Just for the record, a lot of other outlets have reported on this with headlines along the lines of, “Rivers Cuomo saw the ‘SNL’ Weezer sketch and loved it,” because of the tweet you posted. But that’s not exactly true, right?

No. You know my Twitter, right? There’s little on there that’s literally true. A lot of it is Trump-true. Like, I agree with the spirit of what I’m tweeting, but a lot of times it’s not factually correct.

Read more Rolling Stone: The ‘Red Dead Redemption 2’ Soundtrack Might Be the Biggest Album of 2018

Of course. The tweet says “THEY HAD A WHOLE ASS SKIT ABOUT WEEZER AND ME ON SATURDAY NIGHT LIVE AND IM ACTUALLY CRYING AAAGGGGHHHHHHH.” That’s not how you type, is it?