What to make when you're having Michael Pollan over for dinner: white lasagna with roasted vegetable 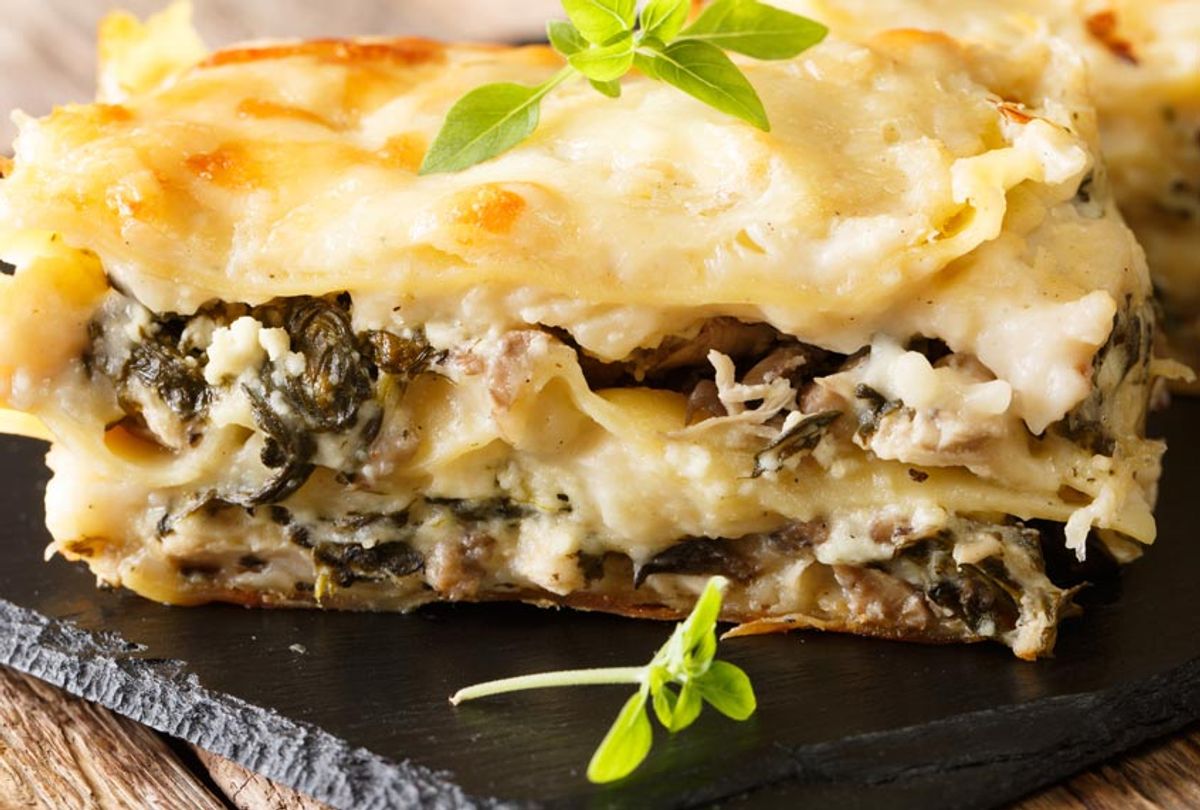 When my parents finally, mercifully, divorced, I was just fourteen. Old enough, in my mother's eyes, to become her de facto, well everything. Why be a harried single mother when you can press your daughter into service, doing all the things that are really hard for working single mothers, like picking up the younger children from school, in this case my little sister, the weekly shopping, the laundry, the house cleaning and, most importantly, having that drink at the ready to quickly dispel the sinking feeling of coming home to no husband? About the only thing I didn't do was ask, "How was your day, dear?" But neither had my father, so it wasn't missed.

As her designated adult I also did most of the cooking. Simple stuff, chops, roast chicken, minced meat with lashings of HP sauce — a singularly Canadian dish I suspect.

It was a pleasant life until my mother decided that single or not she should throw dinner parties. I wasn't adult or chef enough to believe I could manage to cook for my mother's guests so would retreat from the kitchen and leave the meal up to her. A big mistake, or so I thought, as I witnessed her time after time look vaguely around the kitchen at 6:30 pm wondering what to make her guests due to arrive at 7:30.

Naturally, her approach to entertaining has scarred me deeply. Dinner parties are not my favorite thing. So when, one day, my husband, Charles,  came home and said, we’re throwing a dinner for Michael Pollan, I felt slightly queasy.

First off, so you don't get the impression that we just snagged Michael off the streets of Abu Dhabi where we were living at the time and invited him to dinner, he was my husband's editor long before he was The Michael Pollan and has remained a friend. When Charles accepted a job teaching creative non-fiction at NYU Abu Dhabi he invited Michael to come over as a guest speaker.

There was no getting around the fact that Michael Pollan was, in fact, now The Michael Pollan. Moreover back at home in Berkeley, CA, his local, the neighborhood spot he and his wife pop down to for dinner on a boring old Tuesday night is Chez Panisse!

When Charles hit me with the news, I calmed myself with the fact that Michael is an incredibly nice man, so it wasn't like if I screwed up, he would throw down his napkin (lovingly ironed by me) and swear that he would never darken my doorstep again.

Lying in bed that night, hating my husband for his deep sleep, I started to muse over possible dishes. I have the go-to recipes that I tend not to screw up. Pork chops in mustard sauce, fried chicken, lamb with cumin. But each presented a problem. Pork, for instance, tends to blow in Muslim countries. The fresh pork flown in from England imparts no flavor whatsoever. Turning to the freezer section in the special back room in the supermarket that contains all things verboten to Muslims, isn't any better. That Iberian pork looks like it took its last breath during the Spanish Inquisition. Hoar frost does not a tender meat make.

Fried chicken? How elegant is that?

And, then there was the specter that one of the other guests might be a vegetarian.

By dawn, I had decided to make Roasted Vegetable Lasagna with homemade egg noodles. I changed my mind the next night. Then back again the next. And so on, until finally, my brain could take it no longer.

To be polite the night before the party, I sent an email out to the other guests asking if they had any food allergies. Yes, I know. Way too late. But I had other things on my mind. So when word came back that one of my guests throws up instantly when confronted with anything to do with a tomato I handled it like a pro.

Usually, there's a punchline here, like, I got drunk, or stood on the railing of the balcony and threatened to jump. But I, cool as a cucumber, merely decided to switch out the tomato sauce for a béchamel.

But the slight hitch in the proceedings did trigger a cavalcade of memories of those long-ago dinner parties that I thought my mother had no business giving. "Why," I'd silently wail to myself, "didn't she just meet her friends at a restaurant?"

Had she, Mrs. Merchant wouldn't have suffered third-degree burns when Mother plunged steak cubes that she hadn't properly patted dry into fondu oil that was smoking hot and ready to ignite sending up a spray of scalding oil. Or, Mrs. Lewis wouldn't have gone tumbling down the stairs far too drunk because all she had eaten was minestrone soup (tinned) and toast points.

What I didn't see then, but do now, is that her parties were a blast. People wanted to come. There was mystery (whether they would be served any food), danger (see above) and laughs, yes, even the pratfall of Mrs. Lewis had everyone roaring. My little sister knew it, even if I didn't, and she made damn sure she was in on the fun.

"Lai-dies and Gen-tel-man. Here in my hand, I have a nickel. Watch me make it disappear." She was naked. She was five. Her hand disappeared behind her back, her hand returned and the nickel had disappeared from her hand. I'll leave it up to your imagination where the nickel ended up.

As I chopped, peeled, roasted, sautéed, and made my dough, I thought of my prissy self standing by mortified, as my mother's guests couldn't contain themselves while my sister, loving the adulation, did a deep curtsy prompting the nickel to fall out, and I started to laugh. Forty years later there I was in my kitchen, our guests due to arrive, roaring with laughter.

And, when the time came, after the cocktails and appetizers, for everyone to be seated, I took Michael by the hand and led him to a place of honor,  a chair that harbored a secret. That secret? I had taped a nickel underneath.

Combine flour, eggs, egg yolks, splash of olive oil, salt in the food processor and pulse. The dough is done when it comes together in one ball and starts thumping around the bowl. Add more eggs or Olive oil if dough is crumbly. Remove and wrap in cling film. Place in the fridge to sit for at least an hour.

4 tablespoons olive oil or to thoroughly coat the veg.

Slice vegetables and toss with olive oil, balsamic vinegar, salt and pepper until well coated. Arranged in a single layer on sheet pan (or two) along with the wrapped garlic and roast at 375 until soft. Make sure there aren’t too many burnt edges you don’t want the burnt taste in the lasagna.

When done set aside and let cool.

Sauté your greens with a little olive oil and salt until wilted and soft.

Sauté the jalapeños until wilted and soft. Set aside.

Heat in one pot the milk until it’s just warm.

In a second larger pot melt your butter, add the flour. Whisk continuously. When the roux has a nice light brown color, slowly add the milk or creme whisking until the sauce thickens. Remove from heat and stir in pecorino. Set aside

Liberally dust with flour your work surface. Depending on the size of your lasagna pan, plan on having three to four sheets per layer, cut your dough into workable pieces. Roll out as thin as possible, then if using a pasta maker roll through to make lasagna sheets. I tend to cook them in boiling salted water one at a time so they don’t stick. Once they’re cooked, in about a minute, rinse them in cold water to get off excess flour and lined them up around the edges of a colander until you’re ready to use them.

Either chop or pulse the roasted vegetables and garlic a few times in the food processor so they are easier to spread.

Squeeze out any excess water from your greens and again chop or pulse in the food processor.

Spread the bottom of the lasagna pan with Béchamel, then noodles, then roasted veg, a sprinkling of Feta, and so on. Alternating roasted vegetables with greens on each layer.

Finally top with Béchamel and a heavy sprinkle of Pecorino cheese.

Roast at 375 oven until bubbling. About 30 to 40 minutes. Let cool before serving.