I've been the best president in history, Santa, and now I want you to do some things for me 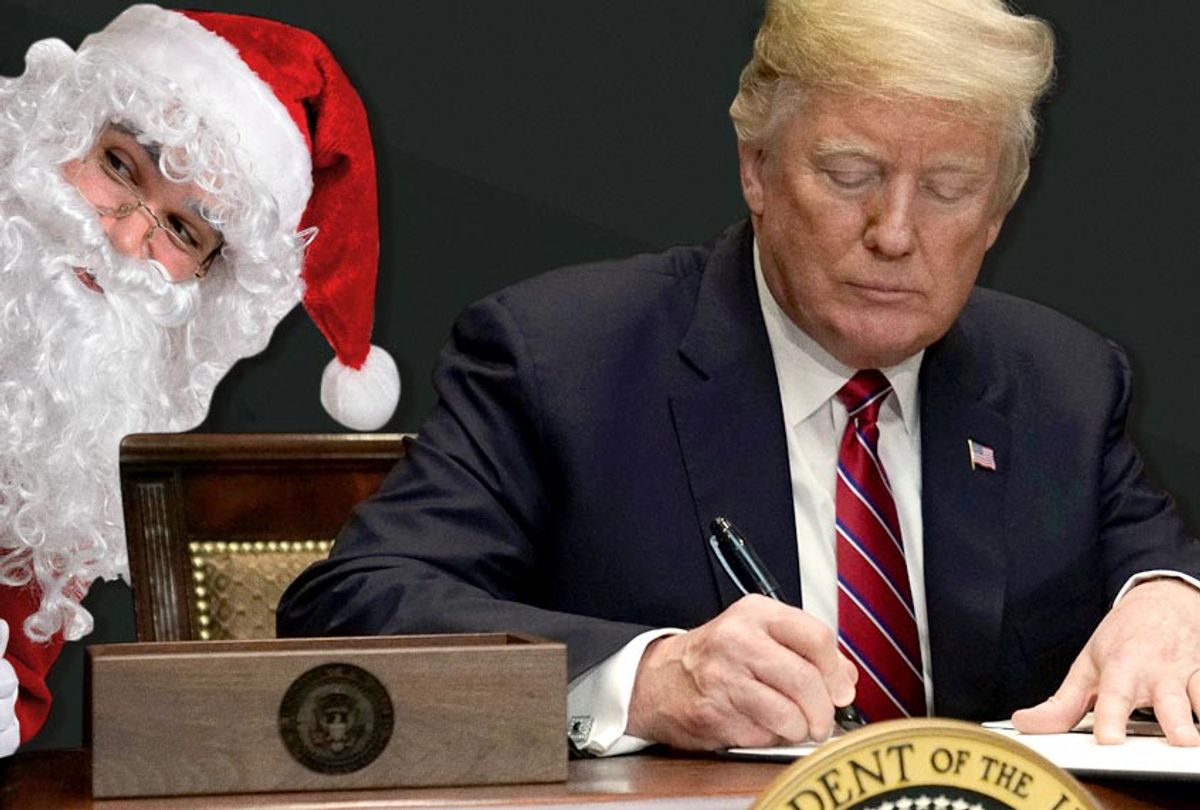 First, I’d like to say that you are very, very, very lucky that I decided to contact you again. I’ve been writing to you for over 66 years and still you have yet to respond. This will be my last attempt unless I end up in federal prison thanks to some fake witch hunt collusion. In that case I will keep writing, because I'll be writing letters to everyone once Twitter isn't an option.

Now that the First Step Act — a bill created, written and approved all by me — has been signed, I'm sure you know that means that I’ve been a good boy and you should grant me all of my wishes.

Listed below are the things I deserve, and I don’t think you should keep me waiting past Christmas Eve.

I'd like you to get Robert Mueller a life so he can stop interfering with mine. He has too much time on his hands. Maybe we can introduce him to Stormy? Nice girl! I mean, does he have a family or any friends, anyone we could reach out to, maybe see if we can cut a deal? (Only the best deals!)

I seem to have misplaced the old Melania. (The body double isn't fooling anyone anymore.)

3. A Shiny Muzzle for Michael Cohen

I'm going to need that snitch to stop running his mouth now.

4. My Very Own Princeling for a Son

I’d like to trade my boy Eric for Jared Kushner, whom I think of as my real younger son. Unlike Eric, who really is completely worthless, Jared can actually perform a task. He helped bring me my really, really big first legislative win with the crime bill. What has Eric ever done?

For obvious reasons. (Love you, Putin!)

6. A Road Trip With My Favorite Black Men

I’d like to go on a Good Negro Tour with Kanye West and Van Jones, as they are really, really good negroes, the best. (Let's leave Ben Carson at home — his energy is too low.)

It’s been another year and she is still free? Why? How? We all know that every problem our great country has comes straight from her crooked emails. I know Ivanka sent emails through her private account like Hillary did but let's focus on Hillary — after all, this is my Christmas list. Is it too late to address this in the crime bill?

I really need this wall, Santa. You know I talk about it a lot, in every speech, at every campaign rally, and on Twitter. You should probably deliver this one first because if I don’t get it for Christmas, I’m shutting the government down.

I asked for this last year and I’m giving you one more shot. Kill the failing New York Times and cancel that god-awful couple Mika and Morning Joe, and his pointless band too.

Santa, even though you are very overweight and very remedial, you're also very responsible in a fat sort of way and valued by me as only I can value you, because only I have the intellect to do so. Please pull this off for me, and if you do I’ll be a tremendously good boy in 2019. (If not, I may go to jail.)

Your President until the new House of Libs start the Impeachment proceedings,
Donald J. Trump