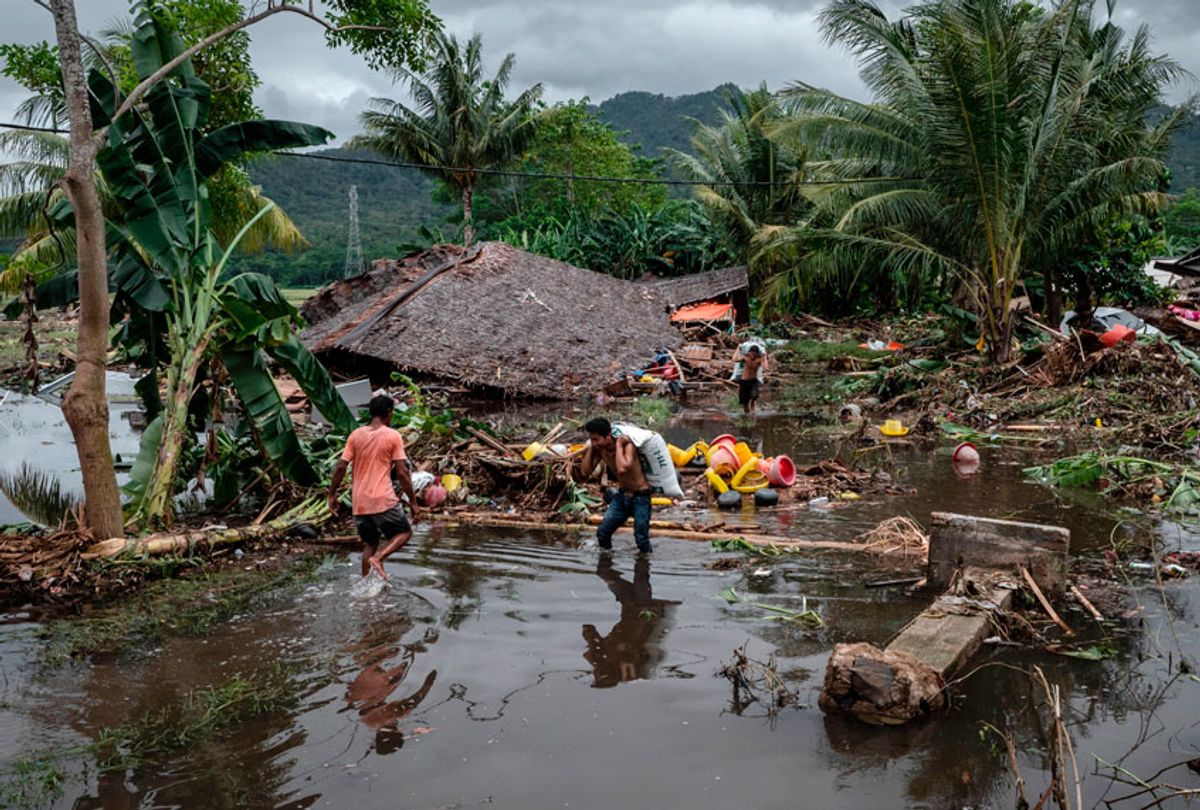 Villagers walk through debris after being hit by a tsunami as they carry their belongings on December 24, 2018 in Carita, Banten province, Indonesia. (Getty/Ulet Ifansasti)
--

On late Saturday night, a deadly tsunami struck the Indonesian coastline unexpectedly and — unusually — without having been triggered by a prior earthquake. As of Monday, at least 373 people have died, hundreds are injured, and more than two dozen people are missing due to the 10-feet high wave. Many locals were on the western Java and southern Sumatra coast enjoying a long holiday weekend.

Tsunamis are often created by oceanic earthquakes. The 2011 tsunami that famously destroyed Japan's Fukushima nuclear reactor was caused by the Tohuku earthquake 43 miles east of Japan's Tohuku peninsula. Yet in the case of this tsunami in Indonesia, the lack of a precipitating earthquake perplexed officials and experts.  Experts now believe that the tsunami was triggered when a piece of the Anak Krakatau volcano slipped into the ocean.

Unfortunately, Indonesia’s current tsunami warning system does not detect volcanic activity and underwater landslides. Initially, Indonesia's Meteorology, Climatology and Geophysics Agency (BMKG) thought that the tsunami may have been a mere tidal wave caused by the full moon.

Sutopo Purwo Nugroho, the chief spokesman for the Indonesian disaster agency, noted on Twitter the tsunami came “suddenly,” leaving people with no time to evacuate. He also sent out a call for a more robust warning system to detect such activity.

“Indonesia has yet to have a tsunami early warning system that can detect underwater landslides and volcanic activity,” he said on Twitter.

A tweet from the United Nations Population Funds of Asia Pacific explains how volcanic activity can cause a tsunami, and Indonesian officials have clarified it was indeed a tsunami, and not a tidal wave.

The catastrophe has led to renewed calls for an early warning system that can detect volcanic activity and therefore predict tsunamis like this one.

“Indonesia must build an early warning system for tsunamis that are generated by underwater landslides and volcanic eruptions … Landslides triggered the 1992 Maumere tsunami and the Palu 2018 tsunami,” Nugroho said via the Guardian, noting that the country’s buoy network has not been properly operating since 2012.

“Vandalism, a limited budget and technical damage mean there were no tsunami buoys at this time,” he added. “They need to be rebuilt to strengthen the Indonesian tsunami early warning system.”

However, if the early warning system did detect for volcanic activity, it is unclear if it would have provided sufficient warning time to evacuate, according to various scientists, because the Anak Krakatau volcano is close to the shoreline.

“The volcano is very close to the shoreline so … there wouldn’t be much time to warn because it’s close and the tsunamis can travel very fast,” Teresa Ubide, a volcanologist at the University of Queensland, told the Guardian.

Regardless, Indonesian officials are reportedly looking into a better warning system, especially since this isn’t the first time a lack of warning has failed its citizens. In September, an earthquake in Central Sulawesi led to another deadly tsunami killing hundreds.

"This (tsunami) is caused by several factors. Our censors did not sound early warning because they are for tectonic activity not volcanic activity. That's why we are in coordination with other agencies such as the maritime and geology agencies," BMKG chief Dwikorita Karnawati said, according to CNN.

This weekend’s tsunami was reminiscent of the Boxing Day tsunami in 2004, which was also triggered by an earthquake. That tsunami killed 226,000 people in 14 countries, more than half of those victims in Indonesia.