Merry Christmas, and happy birthday to a Jewish immigrant

Dear white evangelicals: Christmas celebrates the birth of a Jewish child whose family then fled persecution 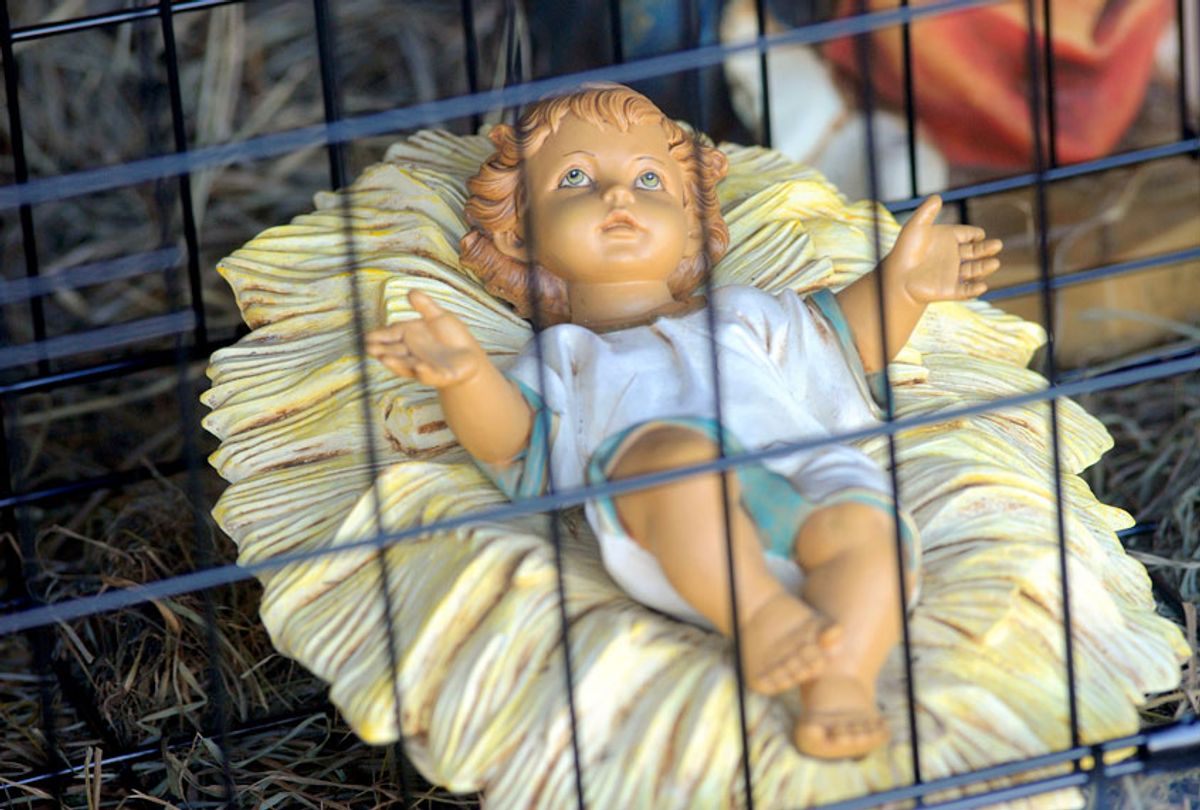 A close-up of a nativity scene depicting baby Jesus in a jail cell and the three wiseman behind a border fence stands outside at Saint Susanna Parish in Dedham, Massachusetts on December 9, 2018. (Getty/Joseph Prezioso)
--

Nativity scenes are a ubiquitous sight in front of churches at Christmas time, but a Massachusetts church recently drew attention due to its unusual display. In its nativity scene, baby Jesus lies inside of a cage, separated from his mother and father. Earlier this year, churches in Indiana and California erected similar nativity scenes, eliciting reactions of both support and condemnation.

These provocative scenes provide clear reminders of something Christians often forget: Christmas celebrates the birth of an immigrant child. Jesus’ parents were from Nazareth, but fearing for the life of their child, they fled to Egypt. As Christmas 2018 approaches, the U.S. is tear gassing children at the U.S.-Mexico border, whose parents seek the same security that Mary and Joseph sought for their child. Children will spend Christmas in cells at the border, separated from their families.

As I show in my book "One Family Under God," many Christians are outraged by this separation of immigrant families. They believe Jesus’ command to welcome the stranger requires treating immigrants and their families with dignity. Data from PRRI shows these Christians are not alone in their views. Most Americans oppose the policy that separates immigrant children from their parents (71 percent), seeing it as antithetical to American values.

But the same PRRI data shows that some Americans do support such policies (22 percent), including a sizeable minority of white evangelical Christians, 36 percent of whom support family separation at the border. For them, “I was a stranger and you welcomed me,” are the words of some soft-hearted fool, not the person whose birthday is celebrated at Christmas. Many white evangelical Christians seemingly believe safety and belonging are privileges rather than rights.

New research on what churchgoers hear from the pulpit may help explain why: despite a supposed end to the “culture wars,” religious leaders remain much more likely to talk about homosexuality and abortion than immigration during religious services. However, this varies by religious tradition and race, with at least four in ten Hispanic and black Americans hearing about immigration from the pulpit, compared with only 16 percent of white evangelical Protestants. If immigration isn’t portrayed as a religious issue in white evangelical churches, then it is little wonder that Jesus’ teachings about welcoming the immigrant — indeed, his position as an immigrant himself — are seen as irrelevant to their positions on immigration policy.

The main characters in the Christmas story weren’t just immigrants: they were also Jewish. The holy family had to flee because Herod, king of Judea, feared the power of the child the magi called “king of the Jews.” Today, fear and hatred of Jews remains alive and well: a recent CNN poll found high levels of anti-Semitism across Europe, where 20-25 percent of people believe Jews have “too much influence” on business, media, and politics. In the U.S., just in the last two months, Jewish students were harassed in schools, Jewish professors encountered swastikas spray-painted outside their offices, and Jewish worshippers were brutally murdered, in part due to their perceived support for refugees.

While some political commentators reacted to the Massachusetts “caged” nativity scene by saying “Christmas is under siege,” calls to stand against those who reject immigrants, Jews, and other marginalized people are not tangential to the Christmas story: they are at its very center.

After Jesus’ birth, the magi, three Persian foreigners, embarked on a long journey to bring gifts to Jesus, to honor the good in something they didn’t fully understand. Sometimes difference — racial, ethnic, cultural, national, religious — causes fear, and this fear too easily turns into hate. On their way to visit Jesus, the magi encountered Herod, who told them to come back and tell him where he could find Jesus so he could “worship him” (translation: kill him). They could have gone back to Herod after delivering their gifts to Jesus. They’d already shown their love and admiration: Why risk their own safety and well-being?

Instead, the magi showed us how to celebrate Christmas by welcoming difference, even if it required them to risk everything. In their most extravagant gift that first Christmas, the magi refused to cooperate with the government’s plan to harm Jesus, resisting the message that an immigrant Jew should be an object of fear rather than a person to honor and love. They defied Herod’s order. They took another road home.