On January 1, a NASA probe will make the most distant fly-by of any solar system object ever

The spacecraft will snap images of Ultima Thule, an object more distant than Pluto in the Kuiper Belt 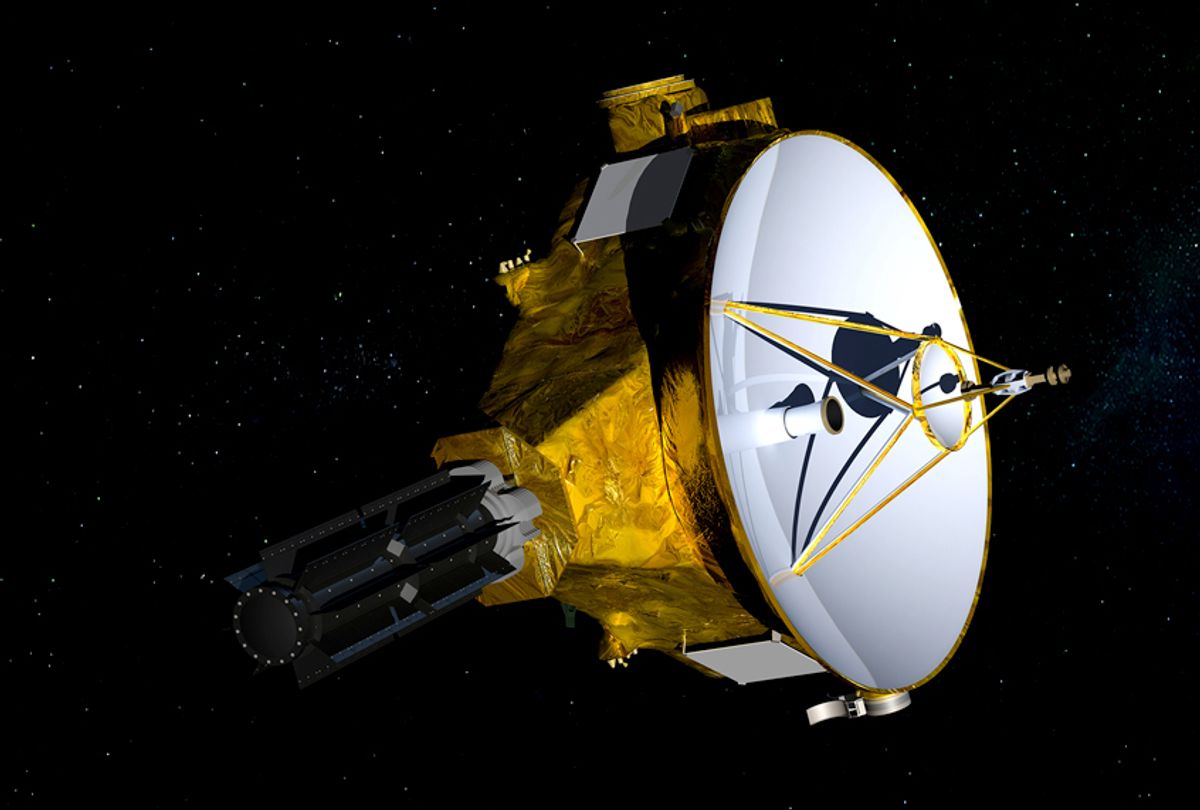 This week may mark the year's end, but it also marks a new beginning for the New Horizons spacecraft. The space probe best known for its incredible photos of Pluto in 2015 is embarking on a new adventure: a flyby of an object far beyond Pluto, named Ultima Thule. The object lurks on the edge of our solar system in the Kuiper Belt.

The flyby is scheduled for January 1, 2019,  though the spacecraft will continue studying the Kuiper Belt until at least 2021.

Ultima Thule is more mysterious even than Pluto. For one, it is far smaller: with an estimated 30 kilometer diameter, Ultima Thule is little more than a glorified asteroid. In the frigid, empty space beyond Pluto, Ultima Thule makes its slow orbit around our sun, swinging around once every 296 years. Scientists have theories as to what Ultima Thule might look like close-up, though most expect there to be surprises; after all, there has never been a flyby of an object this distant before in the history of any space program. Given that scientists have never before studied a Kuiper Belt object like this up close, Ultima Thule may yield many new insights into the history of the formation of our solar system.

As it has approached, New Horizons has already started to take photos of its target, which has already yielded an interesting discovery. According to scientists, there is a lack of a “light curve,” meaning periodic pulsations in brightness.

"It's really a puzzle," New Horizons Principal Investigator Alan Stern of the Southwest Research Institute said in a statement. "I call this Ultima's first puzzle – why does it have such a tiny light curve that we can't even detect it? I expect the detailed flyby images coming soon to give us many more mysteries, but I did not expect this, and so soon."

Scientists have a few theories, but nothing will truly be confirmed until the flyby on January 1.

"It's possible that Ultima's rotation pole is aimed right at or close to the spacecraft," Marc Buie of the Southwest Research Institute, said in a statement.

Another explanation could be that Ultima is surrounded by a cloud of dust.

"Another explanation," the SETI Institute's Mark Showalter said, "is that Ultima may be surrounded by a cloud of dust that obscures its light curve, much the way a comet's coma often overwhelms the light reflected by its central nucleus."

One scientist has suggested it could be due to the object being surrounded by multiple moons.

"If each moon has its own light curve, then together they could create a jumbled superposition of light curves that make it look to New Horizons like Ultima has a small light curve,” University of Virginia's Anne Verbiscer, a New Horizons assistant project scientist, explained.

New Horizons will take high-resolution images that will be available on Earth a few days later. The world can expect exciting findings given the detail New Horizons is known to provide. When the spacecraft snapped photos of Pluto, it bewildered scientists at first.

“Pluto is showing us a diversity of landforms and complexity of processes that rival anything we’ve seen in the solar system,” Stern said of the photos. “If an artist had painted this Pluto before our flyby, I probably would have called it over the top — but that’s what is actually there.”

The photos showed unexpected complexity of the planet.

“The surface of Pluto is every bit as complex as that of Mars,” said Jeff Moore, leader of the New Horizons Geology, Geophysics and Imaging (GGI) team at NASA’s Ames Research Center in Moffett Field, California. “The randomly jumbled mountains might be huge blocks of hard water ice floating within a vast, denser, softer deposit of frozen nitrogen within the region informally named Sputnik Planum.”

The close-up data from New Horizon's observations of Ultima Thule will start to arrive on Earth on the first day of 2019.