Flavored e-cigarettes are fueling a dangerous increase in tobacco use 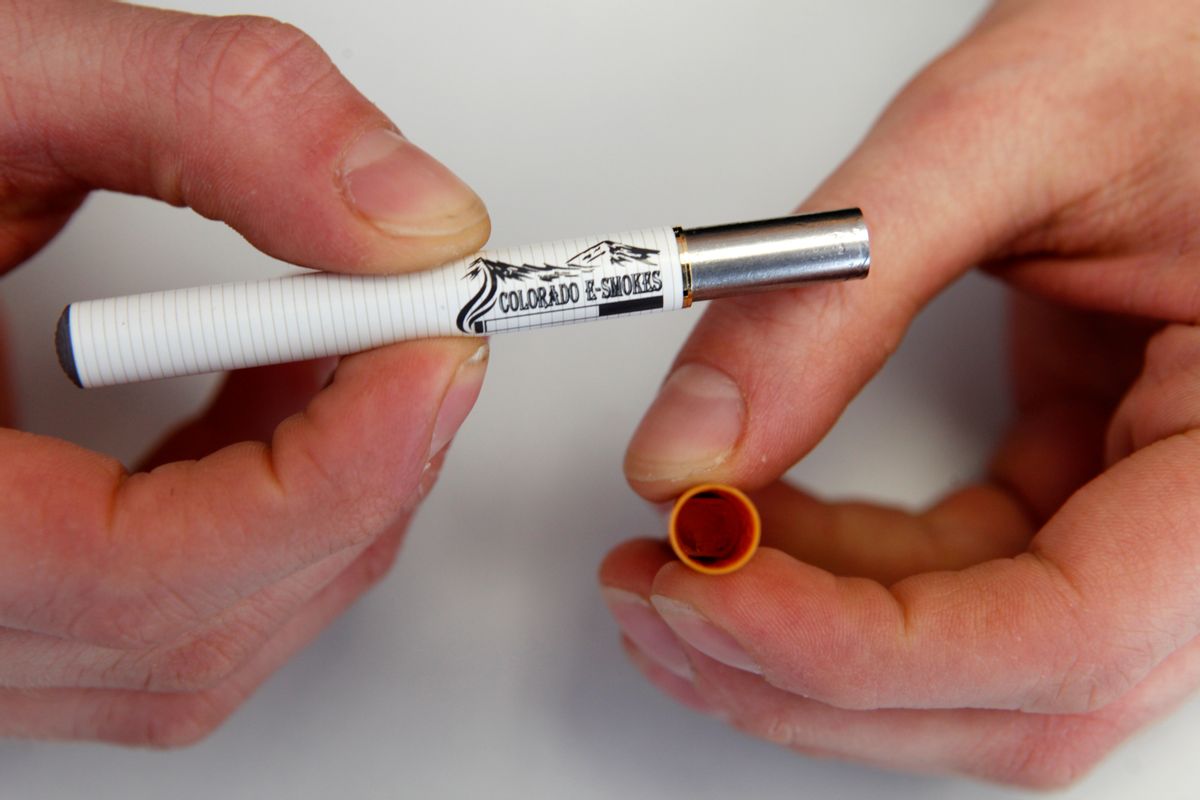 FILE - In this March 2, 2011, file photo, a clerk holds an electronic cigarette and the filter end that holds the liquid nicotine solution at an E-Smokes store in Aurora, Colo. Increasingly popular e-cigarettes and cigar varieties could be exempt from some government safety regulations if House Republicans have their way. It's a move that alarms Democrats and public health advocates who argue that it could lead to unsafe products. (AP Photo/Ed Andrieski, File) (AP)
--

This trend is not by chance. Tobacco companies have spent billions of dollars annually on tobacco product advertisement, according to a Federal Trade Commission report, and have used appealing packaging, culturally tailored brand names and advertisements that appear to target specific minorities and youth. The colorful packaging and other strategies employed by the industry contribute to lower harm perceptions of these products and higher susceptibility to use among young people, according to researchers at the Center for Global Tobacco Control, Harvard School of Public Health and recent research on cigarillo packaging I conducted with my research team.

The FDA has announced efforts to impose restrictions on flavored e-cigarettes and tobacco products. FDA recognizes the high rates of e-cigarette use among young people as a public health concern, and sees the urgent need for stricter product access.

Part of the agency’s plans call for restricting young people under the age of 18 from accessing flavored e-cigarettes via retail establishments and online websites. The FDA is seeking to have retailers move flavored e-cigarette products – excluding mint- and menthol-flavored products – to age-restricted areas in stores, and the FDA is proposing to heighten practices for age verification online. Agency officials have also called for removing e-cigarette products that are marketed to kids, among other measures.

And with the announcement that tobacco giant Altria paid US$13 billion for a 35 percent stake in Juul, the vaping company that uses flavors to market its e-cigarettes, the need to impose youth restrictions on flavored tobacco products takes on even more urgency.

Using a survey of young adults aged 18 to 26 recruited through an online crowd-sourcing tool, our group of researchers at the University of North Carolina School of Medicine found in a study published in PLOS ONE that cigarillo pack flavor descriptors, such as grape and sweet, and colors such as pink and purple resulted in more favorable product perceptions among young adults. These pack attributes had a greater impact on how people who had never used cigarillos perceived product flavor and taste, compared to current cigarillo users, and people who have previously used them.

Further, we conducted a systematic review of all the scientific literature through April 2016 examining the impact of flavors on tobacco product perceptions and use behaviors. Important findings from this study, published in Tobacco Control, suggested that flavored tobacco products have a strong appeal to youth and young adults because of the variety and availability of flavors; that flavors are a reason for use; and that flavors play a primary role in the use of e-cigarettes, little cigars and cigarillos, and hookah among younger people.

Two studies within our systematic review found that packs containing flavor descriptions were more likely to be rated as having a lower health risk. Another study of smokeless tobacco packs in the United States found that young adults were more likely than older adults to report that packs without flavor descriptions would contain more dangerous chemicals. Research is clear that flavored tobacco products have the potential to undermine progress gained to reduce youth tobacco use in the United States.

Importance of flavors in product use

Research and survey data have shown that tobacco habits in this age group are changing. Youth cigarette smoking rates have declined substantially in recent years, with the National Youth Tobacco Survey showing current use of cigarettes declining from 15.8 percent in 2011 to 7.6 percent in 2017 among high school students, according to data from experts at the CDC and FDA. Meanwhile, e-cigarettes were the most commonly used product in that population in both middle and high school students in the survey data.

Within this sample, 19.1 percent used multiple tobacco products, compared with just 10.6 percent of the sample who were single product tobacco users. Youth predominately used cigarettes in combination with little cigars and cigarillos, or cigarettes with e-cigarettes. While there is substantial racial variation in multiple tobacco use patterns over time, in 2015, e-cigarettes were the most commonly used tobacco product among single product users across all racial groups, according to one of our studies published in Nicotine Tobacco Research.

Using data from the 2015 North Carolina Youth Tobacco Survey, we found in a study published earlier this year in Preventing Chronic Disease that among survey respondents who were not susceptible to smoking cigarettes, 26 percent were at “high risk” for future e-cigarette use; 11.3 percent were classified as “susceptible” to using e-cigarettes; 10.4 percent had already tried an e-cigarette; and 4.5 percent were current e-cigarette users.

Using school enrollment figures, we estimated that 55,725 high school students in our home state of North Carolina were at low-risk of smoking cigarettes, but at high risk for e-cigarette use – which meant that they were susceptible to using e-cigarettes, had experimented with e-cigarettes, or currently used e-cigarettes. On a national scale, these findings are a considerable public health problem.

We know that adolescents and teenagers are very vulnerable to the influence of tobacco marketing. The use of appealing packages and flavors has a significant impact on young people, causing them to perceive these tobacco products as less harmful and, in turn, making them more likely to experiment and continue using tobacco products. As research on the impact of flavored tobacco products builds, I look forward to increased action to help prevent youth tobacco use.