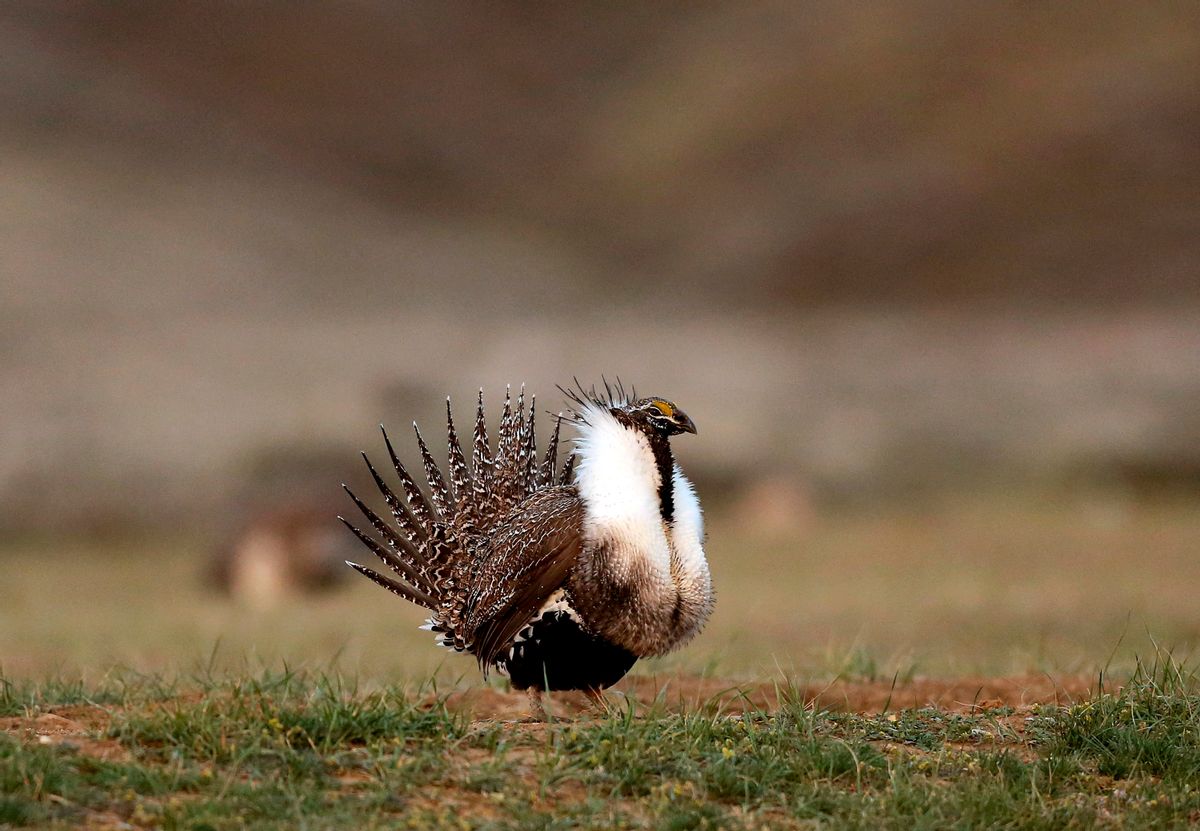 FILE - In this April 22, 2015, file photo, a male sage grouse struts in the early morning hours on a leak outside Baggs, Wyo. (Dan Cepeda/The Casper Star-Tribune via AP, File) (AP)
--

2018 may be coming to a close, but the federal government’s environmental hijinks are far from over. A recent investigation found that this past spring, the Bureau of Land Management (BLM) deleted web pages containing information about the sage grouse, a species native to the American West and parts of Canada.

Compared to some of the other crazy climate shenanigans that the Trump administration has pulled in 2018, this kind of avian censorship seems like it wouldn’t ruffle too many feathers . . . until you consider the timing. The pages, which contained important info about the threatened bird species, disappeared right before the BLM opened up its new sage grouse proposal for public comment. Coincidence? I think not!

I’ll explain what happened, but first, a word or two on the sage grouse itself.

The sage grouse is arguably the most charming and quite frankly sophisticated (appearance-wise) grouse on the face of planet earth. Just look at this majestic bird.

Tell me that doesn’t look like Audrey Hepbird circa "Breakfast at Tiffany’s."

Besides being charismatic as hell, these birds serve an important role in the American West. The sage grouse is an indicator species — which means its population numbers act as a barometer of ecosystem health. And those numbers are in trouble right now. Increased development in the not-so-wild-anymore West has led to a 90 percent decline in sage grouse populations.

In 2015, then-President Obama struck a deal with states, environmentalists, conservationists, oil and gas folks, and other industry reps to save some land for the sage grouse. That way, the species could survive without being designated as “endangered,” which would have created additional obstacles for companies looking to do stuff like put up new houses and drill for oil.

But now, the Trump administration has been trying to renege on that compromise, meeting with mining groups to open more land for development and shutting out conservationists. In May, the Bureau of Land Management unveiled its proposed overhaul of Obama’s sage grouse deal.

A website-monitoring group called the Environmental Data & Governance Initiative just uncovered that the agency deleted multiple sage grouse resources right before the public comment period started this spring. Among the deleted pages is one titled “Top 5 Things You Should Know About Greater Sage-Grouse.” I recommend you read the full archived version yourself, but the major takeaway for me was bullet point No. 5: “The sage grouse knows how to dance.”

This month, the government released the final version of its proposal, which would permit states to ease habitat protections and open up thousands of protected acres in Utah for development. The new proposal could spell the end of the stylish sage grouse.

Maybe you’d like to take advantage of the 30-day “protest period” that ends on January 8 like Charles Seniawski of Cheyenne, Wyoming, did. “I would appreciate your leaving well enough alone,” he commented. “We like things the way they are.”