At our weekly meetings, the doctor gave me his undivided attention, something I yearned for in a man 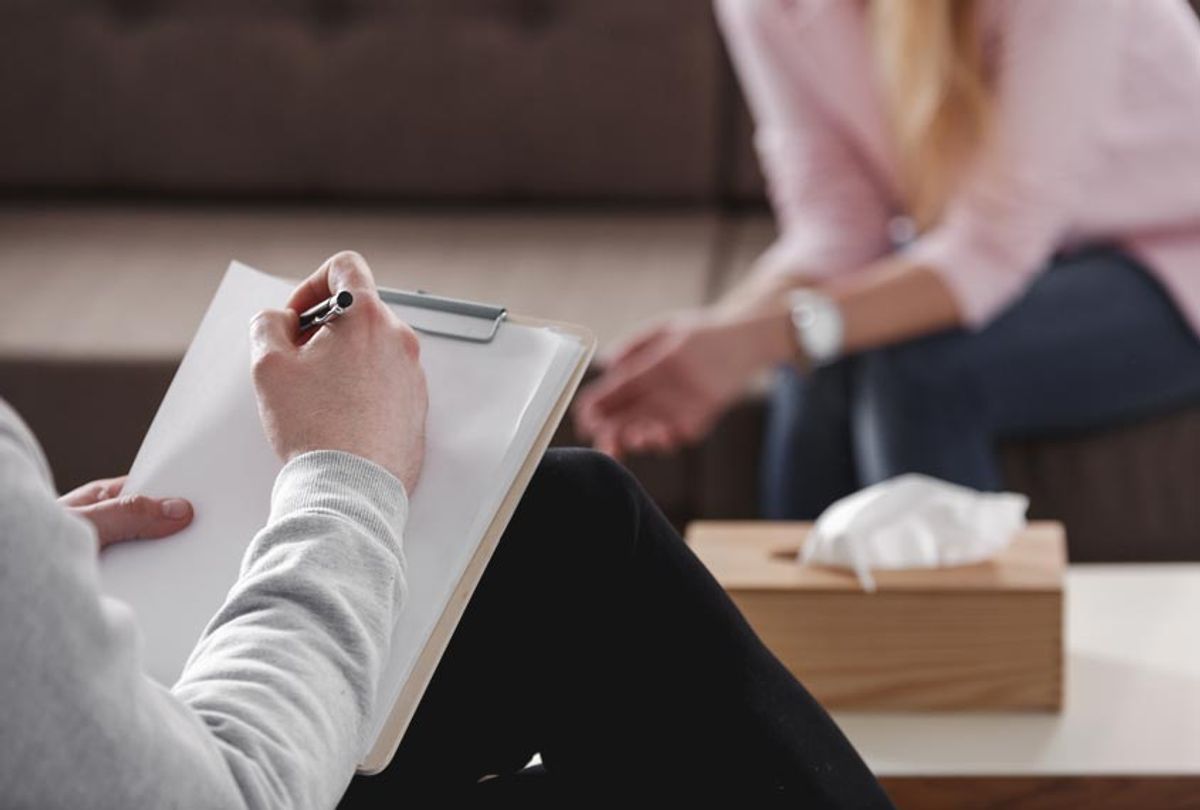 The first time my shrink kissed me was in his office. I was 24 and had been his client for six months. When I started therapy with him I was living in Denver, collecting unemployment and feeling lost. My father had just died unexpectedly of a burst aorta back East while I was on a backpacking trip. Unable to contact me, my mother buried him without me. My long-time boyfriend, who’d deserted me to go to law school, had recently informed me he was marrying someone else. I’d lost the two most powerful men in my life and was floundering. I desperately wanted someone to love me.

My therapist worked in a clinic that served patients who, like myself, could afford treatment only on a sliding scale. He was handsome and at least 20 years my senior. His gray hair swept across his forehead down to his Clark Kent glasses. He wore tweed jackets with chamois elbow patches, which reminded me of my college professors. Back then in the early '70s, the men I knew sported plaid flannel shirts and hair down past their shoulders; my feminist friends went braless and didn’t shave their legs. Still, I felt comfortable with my conservative psychologist. He exuded a familiar intellectual air. My father, a middle-school principal, was an academic. My brilliant ex-boyfriend was our college’s class valedictorian.

At our weekly meetings, the doctor gave me his undivided attention, something I yearned for in a man. I thought about him constantly.

The day I opened up to him about my feelings I tried to look my best. I wore an ankle-length velvet skirt and a peasant blouse I’d sewn myself, my long brown hair loose and flowing over dangling hoop earrings. I hoped he was as attracted to that image as I was to his scholarly look.

“You really understand me,” I said. “I can talk to you about anything.” Although it was uncharacteristic of me to be so bold, I continued, “But I can’t stand it anymore. I think I’m in love and want to go out with you.”

“I never date my patients," he responded. "Very unprofessional.”

I felt immediately deflated and humiliated by my brazenness.

He adjusted his glasses and peered down at his notebook before looking back at me. “However,” he continued with a mischievous glint in his eye, “I could terminate your therapy. If we wait six months, that might be enough time for it to be acceptable. You can call me then.”

I agreed, and he scrawled something in my file. As I got up to leave, he stood too.

“Time for a little bit of reality. OK if I give you a good-bye kiss?” he asked. With that, he drew me toward him and kissed me on the mouth. I leaned in. He tasted sweet, like doughnuts and coffee.

I could hardly wait for the time to pass so I could feel his lips on mine again. Initially a half a year didn’t seem unmanageable, but living through it was excruciating. It hadn’t occurred to me that I’d be without his guidance during all that time. Rather than switch therapists I stopped going all together, but the feelings of loss and aimlessness that I’d initially sought help to resolve were still with me. I took a new job as a counselor in a group home for troubled teenage girls and an abnormal psychology class, and those took up most of my time. But I still had no man in my life. I fantasized about being with him instead, counting off the months, weeks and days until the torturous interlude was up. Then, tingling with anticipation, I called him.

He picked me up two days later in his new and sporty Pontiac Grand Prix — a contrast to the little ’67 Datsun I’d been tooling around in that was prone to overheating and made a grinding noise when I turned the steering wheel sharply. He looked dashing in his black turtleneck and wool jacket. I was taken aback when he held the car door open for me. That was something I didn’t expect from men of my generation.

At the neighborhood cinema we saw "One Flew Over the Cuckoo’s Nest," the hugely popular film in which Jack Nicholson’s character and others are victimized by the mental health profession. I watched the movie in bliss, certain that my companion was the perfect doctor — nothing like those portrayed in the movie.

Over pasta at a local bistro, I asked the therapist to tell me about himself. He sipped his wine slowly. “I just went through a brutal divorce,” he said. That evening I learned that he and his ex-wife shared custody of their rebellious 16-year-old son who was constantly getting into trouble. He barely spoke with his boy and believed his wife had turned his kid against him.

“I’m worried that he’s getting into drugs and might fail or drop out of school,” he lamented.

He complained bitterly that his wife had extracted a huge alimony settlement from him. “She got the house in the suburbs while I’m living in a dinky walk-up apartment downtown,” he said.

What happened to my strong, all-knowing psychologist who helped me solve my problems and figure out my purpose? As I listened to him complain about his life, his attractiveness dissipated with each grievance. The elbow patches on his jacket, so endearing at first, started to look like an affectation instead. I didn’t want to hear that his life was less together than mine. I could barely figure out where I was going, much less be a partner to someone with such complicated problems. When he walked me to my door that night, I no longer wanted to invite him in. When he put his arms around me and kissed me for the second time, I couldn’t wait to get inside my house without him.

After the agonizing months-long wait, it turned out my psychologist was more messed up than I was. What I’d hoped would be the start of an exciting affair became instead an opportunity for this downtrodden man to vent about his problems, casting me in the unwitting role of therapist instead.

“Call me when you want to get together again,” he said.

“I don’t think I’m ready for this relationship,” I confessed, and I shut the door behind me. We never saw each other again.

When I shared the details of my rendezvous and my stunned realization with my two roommates later that evening, the women shook their heads knowingly.

“What did you expect, getting involved with someone you spilled your guts to in hopes of shedding the baggage you’ve lugged around all your life?” said one. “Didn’t you consider that there might be a problem with role-switching down the line?”

The other, then a nursing student, was equally incredulous. “Hasn’t this guy ever heard about transference? He’s an experienced professional. He should have known that you were putting your feelings for your dad and boyfriend onto him.”

Two years later, assigned to a new male psychoanalyst and troubled by my growing attachment to him, I related this episode during a session. “I think he scared the living daylights out of you,” he replied.

Not only was I frightened, I was let down and confused as well. Decades later, uncertainties about this chapter of my life have stayed with me. Inspired by the #MeToo movement I began revisiting this period, wondering whether our date and our kisses were ethical behavior on his part. I wanted to condemn him for abandoning me at a vulnerable time during my treatment in order to go out with me at a later time. He knew my weaknesses, therefore a power imbalance existed. I wanted to see him as selfishly exploiting the situation without taking my best interests into account.

I’d never told this story to my sweet, caring husband until recently. To my surprise, his initial response was sarcastic. “At least he discharged you first rather than continuing to treat you while dating you.” I had expected him to be more protective of me.

Today my women friends view this professional as a predator who gamed the system simply by postponing the date for six months. Another friend, herself a psychotherapist, feels that he overstepped the boundaries of our doctor/client relationship in a way that could have been harmful. “Therapy should be a safe place where you feel secure enough to explore your feelings,” she said. These viewpoints are in contrast to those of my friends in the ‘70s who perceived the episode simply as a matter of bad judgement on my part as well as his.

Now, as a medical school neuroanatomy teacher, happily married for 35 years with three adult sons, I can look back with some perspective. I can’t call it harassment because I consider myself the initiator. I came on to him, returned his kiss, called him up, and went out with him. Ultimately I rejected him when, rather than living up to my imagined ideal, he became too human. In retrospect, I see that my shrink may have been more hurt and defeated than I. He was just a man, more lost than I ever was.