One-pot chicken chile soup; or, how to raise a good eater 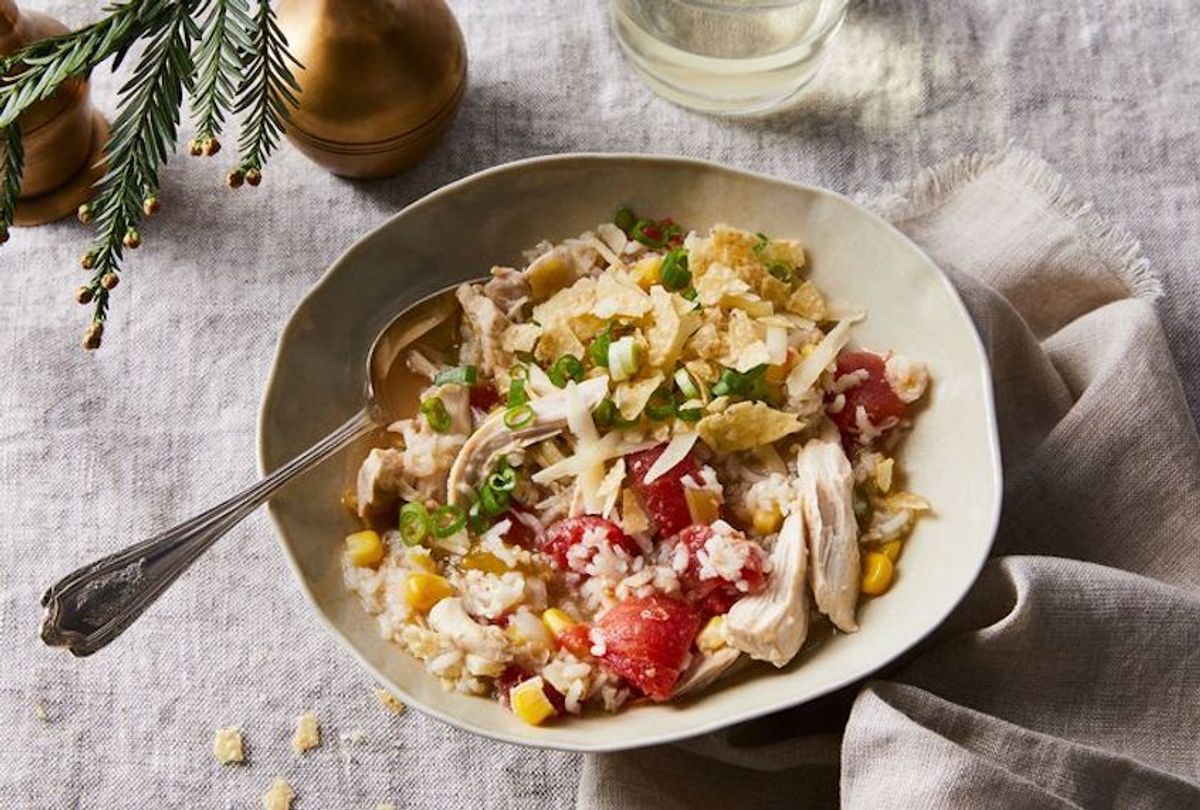 In the online cookbook that my parents have kept since 1997, my mom sums up our relaxed holiday tradition in one neat, cheerful sentence: “We always invite friends over and have a soup buffet with Chicken Chile, Oyster Stew, and Minestrone — something for everyone!”

What she didn’t say was that, when she was growing up, there was no soup buffet, no “something for everyone.” Only Oyster Stew and, in a rather bold pairing, boozy eggnog — two specialties of her late father, a legendary figure I would barely get to know other than through stories and recipes like this. Daddy’s Oyster Stew. Daddy’s Eggnog.

To my little brother and me, kids growing up on Trader Joe’s frozen stir-fries and Rice-a-Roni in the ‘80s and ‘90s, Oyster Stew was an alarming mystery. It started with picking up many jars of shucked oysters at the grocery-store seafood counter — airless gray matter, shoved into a tall jar that only seemed to exist this one week of the year. Later, the gray bits would reappear from a big vat on the stovetop, sunk below gallons of whole milk and very little else: some melted butter, celery salt, black pepper. My grandmother ate it with reverence; my brother and I recognized it as ritual, but not food. Any leftovers were doled back into the emptied milk cartons and frozen for someone to eat, someday.

But in spite of our mistrust of the stew, I don’t remember any tension around the meal, or pressure to honor my Grandpa’s memory by forcing down his soup. The tradition was there for us to witness and participate as we chose, but — thanks to the soup buffet — there was plenty of other recognizable food for us to eat and look forward to every year, too. The one I latched onto was the Chicken Chile (not chili). It’s something like a lighter version of tortilla soup, its broth steeped with gentle onions and green chiles, full of soft shreds of chicken and soup-bloated rice. The best part is that it’s all poured over tortilla chips, like soupy nachos, with gobs of melty cheese and scallions (if you like green things).

I’ve thought a lot, almost certainly too much and too prematurely, about how to raise a good eater. For years I felt ashamed and a little bitter about all I’d missed in my picky childhood — avoiding not just Oyster Stew, but foods with any sort of strong flavor or joy. Perhaps my greatest crime was microwaving beautiful medium-rare steaks until steaming brown. I wouldn’t even taste anything that could be considered a salad — too much flavor! On what should have been an adventurous family trip to Maryland, while my parents and brother worked their way through a heap of steamed crab splayed across the tabletop, I ordered a wan chicken stir-fry. I regretted it even then, but felt trapped by my own weird aversions.

Years later, in grad school, I’d obsess over scientific studies proving out biological and psychological culpability for my frustrating tics. Each conclusion would deepen my resolve that I’d never raise a picky eater myself. Someday, I would eat everything while I was pregnant and breastfeeding, because studies showed that flavors are passed on through amniotic fluid and breast milk — through the valiant work of panelists trained to sniff and taste them — and that babies later showed preferences for those very flavors they’d been exposed to early on. I’d scrupulously keep introducing as many new foods (anchovies! spicy greens! cumin lamb noodles!) as I could before the infamous toddler food lockdown: As soon as kids are mobile, I learned, they’re pre-wired to reject bitter and unfamiliar flavors, since they’re otherwise suddenly able to wander off and put exciting, toxic things into their mouths.

At that point, even more psychological findings would start to kick in. Science says: Don’t offer desserts as rewards (or rescind dessert as penalty). Don’t make mealtimes stressful by forcing bites. Most of all, despite what two competing cookbooks were advocating at the time: Don’t lie and hide vegetables in cakes and mac and cheese, because then your kids will only ever learn they like cakes and mac and cheese, not the things hidden inside. And, oh, try not to give birth to a supertaster, because then they’ll probably never like anything with lively flavors and textures — what with their hypersensitive tongues, riddled with extra taste buds the rest of us don’t have. How exactly I was supposed to avoid all of this would be figured out at a later date.

But, after observing the real-life babies that more and more of my friends and family are raising and trying to feed every day, I realize that I actually know very little about what’s coming, and can control even less. The kicking, squirming, now hiccuping little girl who’s growing in my belly will have her own ideas about all of this. I have to let go of raising a perfect eater, or she’ll never stand a chance.

All of this gives me a new admiration for how my parents raised and fed me. My picky-eating persona hardened not because of them, but likely through some combination of a need for control, a shaky ego, and a couple traumatizing, publicly forced bites of salads glopped with heavy, creamy dressings — one at preschool and one at Girl Scout camp, both through tears and shame. By contrast, my parents basically did what all the studies I read in grad school advised, without having to read them. They didn’t pressure me; they just provided the unassuming, wholesome foods that I would eat (frozen lima beans, canned peas, overcooked meats, a little ramekin of carrot sticks), while the rest of them ate big fresh salads and juicy medium-rare steaks, never letting my bad attitude stop them from enjoying the better versions. This was always right in front of me so that I could observe and get there on my own time. I didn’t get to place my own orders for custom meals, but there was always some inoffensive thing there that I would eat and — at best — might even make me look forward to dinner, like the soupy nachos of Chicken Chile.

It obviously worked over the long haul, maybe even too well. I eventually fell so in love with food as I started cooking for myself in college — studying Julia Child’s "The Way to Cook" while sunning myself in my first front yard, quickly opening up to the point where I would taste anything and probably like it — that I ended up leaving my fledgling career in economics to eventually work at Food52, an online cookbook almost a little bit like my parents’, for a very different era.

I can only hope to offer the same inspiration and patient cheerleading for my daughter. But I’ll have to let her find the rest of the way on her own terms.