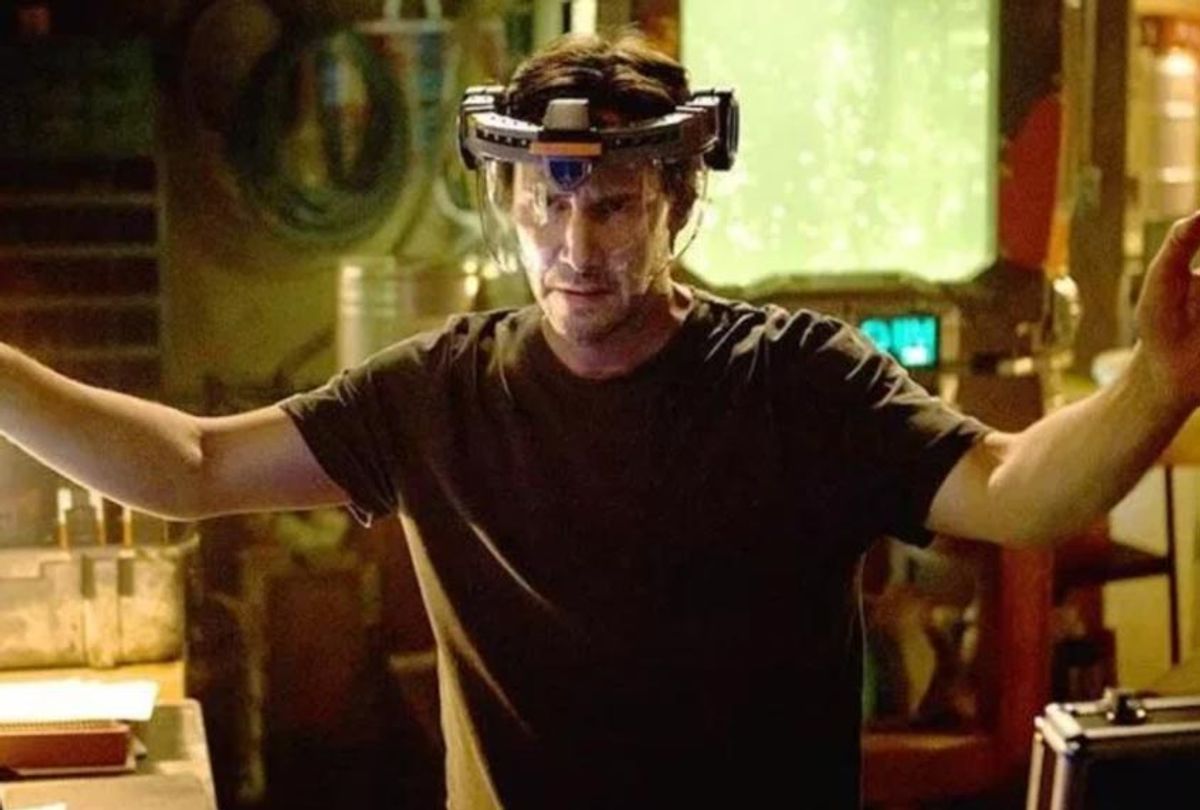 Frankensteined together from the stiff corpses of a dozen smarter movies, “Replicas” is a cloning thriller so carelessly stupid that it often feels like a mad science experiment gone wrong. In fact, the film is such an awkward chimera of stolen ideas that the premise alone violates the basic laws of screenwriting, and probably also those of nature itself.

William Foster (Keanu Reeves, in a lifeless performance that’s silently praying for VOD) is the top neuroscientist at Puerto Rico’s Bionyne research facility, where he’s inventing a way to download a human brain into a synthetic robot body. That’s a difficult task, and it’s made a whole lot harder by William’s impatient boss (the ever-reliable John Ortiz), who gets all kinds of huffy when he learns that his star employee may not achieve the greatest technological achievement in all of history — and effectively kill God — in time for the company’s next earnings report.

There’s reason for optimism when William’s assistant and human exposition device (a fidgety Thomas Middleditch) wheels in a new test subject who’s fresh from the morgue, but everything goes haywire after the android body — a janky CGI robot that melds the generic character design of “I, Robot” with the FX quality of “The Lawnmower Man” — violently rejects the dead man’s consciousness. But all of this business is really just a backdrop for the real plot, which kicks off when William accidentally steers his car off the road during a sudden island storm, killing his wife (Alice Eve) and their three kids in the process (don’t expect any references to Hurricane Maria, as “Replicas” was shot all the way back in 2016). Of course, in a glorified B-movie such as this, death is often a temporary condition. And so it’s no surprise that William doesn’t leave the scene of the crash or even start crying for his loved ones before he decides to go the full Lazarus and map everyone’s neural networks into a hard drive for later use.

Read more IndieWire: Keanu Reeves and Winona Ryder Might Be Legally Married, and We Have Francis Ford Coppola to Thank

At this point, you probably think you know where this is going; you probably think our desperate hero is going to upload his family into a batch of robot bodies as part of a desperate bid to make the most of his tragedy, right? Wrong. In the braindead world of “Replicas,” where “London Has Fallen” screenwriter Chad St. John only pitches curveballs, that kind of thing would almost too much sense.

So what does William do? With the help of his faithful yet frazzled assistant, he decides to secretly clone his family members from scratch, regrowing their tissue in his basement and injecting them with the memories and experiences they had on the night of the accident. What could be the harm in that? William always scoffed at his wife’s belief in the soul, arguing instead that the human mind is just a series of pathways that could be navigated and re-drawn with the right GPS. Now he’s going to put that theory to the test.

This plan raises several questions, none of which the movie has any interest in answering. Questions like: “What?” And: “Since when can you grow human clones from a vat of fructose in your basement?” And: “Why is William so interested in robots if he can bring the dead back to life in their own flesh and blood?” And also: “Why does it take exactly 17 days for each of them to reach maturity, even though William’s wife and children are all different ages?” (if you listen closely, you might hear fellow audience members asking this one aloud). And most of all: “Was Middleditch’s frantic character scripted to seem like a coke addict who completely misjudged the vibe of a Jimmy Buffet concert, or were those Tevas just a choice that director Jeffrey Nachmanoff made along the way?”

Meanwhile, “Replicas” completely ignores its only compelling moral dilemma. See, there’s a Sophie’s Choice baked into the story, as William only has enough equipment to clone three of his four family members, and — in a choice that the movie never bothers to interrogate — he decides to reserve one of the magic pods for his wife. That winds up being very bad news for Zoe (Aria Leabu), the baby of the family. So William decides that the best thing to do would be to delete any memory of the child from his clone relatives’ brains. Perhaps he’s trying to save the replicas from needless grief, or perhaps he’s just trying to absolve his own sins; it’s genuinely impossible to know, given that even the “natural” characters have all the humanity of department store mannequins.

Read more IndieWire: ‘A Dog’s Way Home’ Review: This Increasingly Inane Dog Franchise Needs to Be Sent to a Farm

But any semblance of coherent storytelling falls apart when William’s family returns from the dead, as the film is paralyzed by all of the conflicting genres that are fighting for control of its plot. When the narrative seems primed for psychological horror, Nachmanoff steers it towards corporate espionage. And when the table is set for some twisted domestic drama, Nachmanoff interrupts dinner for an unexciting car chase. Eventually, it starts to feel as though the movie is simply changing gears in a desperate bid to distract from its own harebrained ideas; by the time Keanu Reeves teams up with robot Keanu Reeves for the climactic shootout, “Replicas” has become far too clumsy for audiences to believe in the integrity of its science, and even more derivative than its title might imply.