Smart Watch: "Valley of the Boom," "Corporate" returns, and "The Dictator's Playbook" on PBS

Before Internet gazillionaires were rich enough to launch Teslas into space, they were battling for dominance 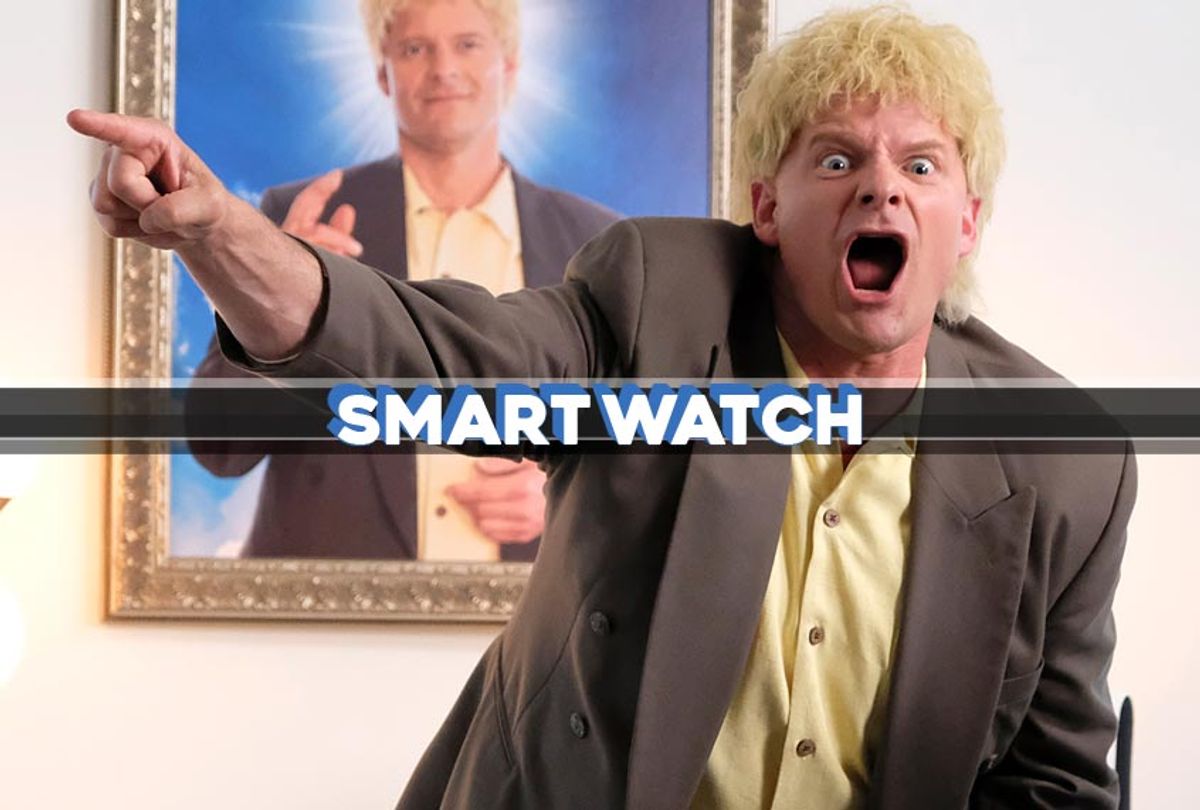 Steve Zahn in "Valley of the Boom" (National Geographic/Bettina Strauss)
--

“Valley of the Boom” premieres Sunday at 9 p.m., National Geographic

It wasn’t so long ago that politicians understood the web to be “a series of tubes” and talk show hosts such as Bryant Gumbel and Katie Couric were debating what the @ symbol meant, asking their resident experts to “explain what Internet is.” We take “Internet” for granted now as a part of daily living, accessing it via pocket-sized computers yesterday’s talking heads could never have dreamed would be possible.

Many of our modern conveniences are fruits of an era forged by, as National Geographic’s “Valley of the Boom” describes them, “Visionaries, Hustlers, Geeks, College Kids and Al Gore.” That last part is a bit of cheek for effect, deleted quickly by a green cursor, a taste of the jocund energy that informs this six-part limited series.

“Valley of the Boom” embraces the lunacy of exploring recent history, particularly the chapters pertaining to the modern technology revolution. A wise move, given the velocity of its transformation, what with its the rocket rises and blink-quick tumbles down sheer cliffs, to say nothing of the amoral rule-breaking that made some companies and obliterated others.

The Wild West tactics the series portray are still very much at work today, employed by much larger companies — but quietly, proving they learned the hard lessons sustained by their 1990s-era predecessors, a few of whom are featured here.

Back then Silicon Valley was in its nascent stages, and many of the players who built the place were kids or younger industry mavericks. Most are still around, although only a few agreed to go on camera to contribute the non-scripted portions of each episode. That makes the series is only “mostly true,” according to an admission delivered by text graphic. However, what we see and hear contains enough veracity to maintain our attention.

Given that “Valley of the Boom” is about three companies that either no longer exist in their original form or at all, one can appreciate series creator Matthew Carnahan’s application of idiosyncratic storytelling techniques. By fusing documentary-style interviews with scripted arcs in which characters break the first way, Carnahan takes us from one factual mile marker to the next, propelled by heaps of dramatic license and no small amount of madcap humor.

That probably the only way to handle a series about people generally not known for being zany, or cool, or even normal. Even now the world of Silicon Valley is one the majority of Americans comprehend through the lens of HBO’s comedy, which gets the culture of the place fairly accurate without bogging down the plot in the barely scrutable details of code, algorithms and protocols.

Had Carnahan promised a straight story about the rise and fall of, say, Netscape, only a limited number of folks (nerds, mostly) would tune in. A fair number of people still remember that Netscape used to be the go-to Web browser, making it Google’s ancestor. The tales of theglobe.com and Pixelon, two companies whose existence escaped the notice of most modern Internet users, may have been entirely lost to the ages.

But they’re important pieces of a short, packed history, the predecessors of Facebook (theglobe.com) and streaming services such as Netflix (Pixelon). “Valley of the Boom” features the actual players who are willing to go on camera to tell their story and hires actors such as Steve Zahn to provide the perspective of those who cannot or would rather eat glass than agree to do so.

To make the mind-numbing passages of the story palatable — such as, notably, transforming an industry-shifting meeting between early-era Microsoft and Netscape into a rap battle — Carnahan breaks all sorts of conventions and plays to the comedy strengths of his cast.

Zahn, especially, is in his comedic element here, as are Bradley Whitford and Lamorne Morris, all playing to the back row as they break the fourth wall or remind the viewer, literally, that they are the embellished fictional versions of real people.

But as Michael Fenne, a swindler who smoothed talked his way into securing funding for a streaming video company that would boom and bust in under three years, Zahn takes on a giddy greasiness that borders on disturbing. Strutting about in a bleached and permed wig, and twisting his interpretation of the Bible to juice up investor confidence, he’s a solid con man — infuriating, comedic and shameless.

Preventing “Valley” from bottoming out are testimonials from the actual figures involved, including James Barksdale, former President and CEO of Netscape Communications Corporation (who also is played by Whitford); Netscape founder Jim Clark (played by John Murphy)  and co-founders of theglobe.com Stephan Paternot (Dakota Shapiro) and Todd Krizelman (Oliver Cooper). Contextualizing the history further are venture capitalists who got in early or enjoyed the view from a front row seat, including Mark Cuban and Arianna Huffington.

Since Marc Andreessen declined to participate (to put it politely), John Karna takes broad license to channel wickedness and unapologetic ennui, filling in the blanks of a guy not known for his politesse or human warmth.

Yet at times the drama’s rollicking energy nearly shakes the substance out of “Valley of the Boom." Each chapter’s pace flows well, but there can be a herky-jerky energetic inconsistency between episodes as Carnahan throws in one diversionary gimmick after another.

For example, at one point we’re treated to a puppet version of Bill Gates. And while that works, it also took me out of the story instead of augmenting it. Such contrivances come at the expense of gravitas, but given the frequent opacity of the stories behind what actually happened, a viewer can’t fault Carnahan too severely for doing all he could possibly do to keep the story light and limber.

Connection speed is everything, after all, and even though “Valley” verges on the vacuous and cute at times, overall Carnahan keeps the plot moving at a pace attuned to our short attention spans while surreptitiously programming a bit of history into our memory files.

Think of its execution as a product of the technological age these companies yielded, but ultimately did not live to experience, innovate and impact. As we know, others mentioned in the series did.

Who knows if the world lampooned in this underrated series would exist if not for the dot com boom?

Corporations themselves would be alive, well and overshadowing our lives — that’s a certainty.

But the soullessness permeating the multi-national corporation Hampton DeVille at the center the series mirrors the business philosophy espoused and developed in the tech world. A recent CNBC article described Facebook’s work culture as “cult-like,” for example, where according to one former employee who was quoted, "There's a real culture of 'Even if you are f---ing miserable, you need to act like you love this place."

That person will either be delighted by the season premiere’s board room scenes or experience PTSD flashbacks, as domineering CEO Christian DeVille (Lance Reddick) responds to a clueless upper manager’s happy news from his personal life by setting up a terrible humiliation that effective crushes his spirit, along with the spirit of anyone else who believe they can experience such bliss.

Co-creators Matt Ingebretson and Jake Weisman (who conceptualized the show along with Pat Bishop) star as the sad-sack drones at the center of the place who are constantly being reminded of how pointless their lives are. Even love, they decide, is a trick foisted upon them by their hormones, manipulated by the office’s seating chart. Their co-worker Grace (Aparna Nancherla), the human resources director who acts as the place’s deflated Obi-Wan, confirms this.

Although the adventures differ from episode to episode, the central message of "Corporate" is to give in to the life that’s been programmed for us, one optimized for convenience and comfort when we’re not working, and goosed by fear, back-stabbing and stack-ranking when we are.

It’s grim, hilarious — and if you’ve ever worked at a place like it, utterly accurate.

Saldy, accepting the horrible yoke of structures such as this makes us susceptible to more dangerous developments on an international scale.

Enough Americans bought into a failed businessman’s illusion of power and business success to hand him the key to the White House. Donald Trump’s last name glows on skyscrapers and hotels in several major cities. It sells food and books and television series. People saw him as an effective boss because a television executive producer styled him as such.

Today he’s holding the paychecks of hundreds of thousands of government workers hostage to force taxpayers to pay for a wall a majority of Americans don’t want, but one he promised to the people who voted for him. And he’s threatened to declare a national emergency in order to get what he wants more or less by fiat.

PBS could not have timed the airing of this documentary series better. Naturally the television service couldn’t have predicted that “The Dictator’s Playbook” would be airing during an intense period that finds America teetering on the edge of autocracy. A different cliff’s edge, we should say; we’ve been surrounded by cliffs lately! Even this weren’t the case, it’s an important history to absorb.

The series profiles six strongmen, walking through the stories of how these men rose to power, the strategies they enacted to secure it and the methods used to ensure their reigns would not be contested — a few of which Americans are experiencing in this moment.

Their gameplays include calls for violence against specific groups, the spreading of fear via propaganda, the delegitimization of the press, and the consolidation of power within a limited group of people, preferably the ruler’s family and close allies.

These were the tactics that enabled Kim Il Sung to seize power in North Korea, passing his rulership down to his sons by way of brainwashing the populace and locking down power through fear.

Kim’s profile aired last week; next up is Saddam Hussein. The remaining episodes take a look at Benito Mussolini, Manuel Noriega, Francisco Franco and Idi Amin, and let’s hope they’re more of an education about a worst-case possibility as opposed to a warning as to what’s coming next.