“We have evidence from around the world of Coke [influencing] policies and public opinion," one researcher says 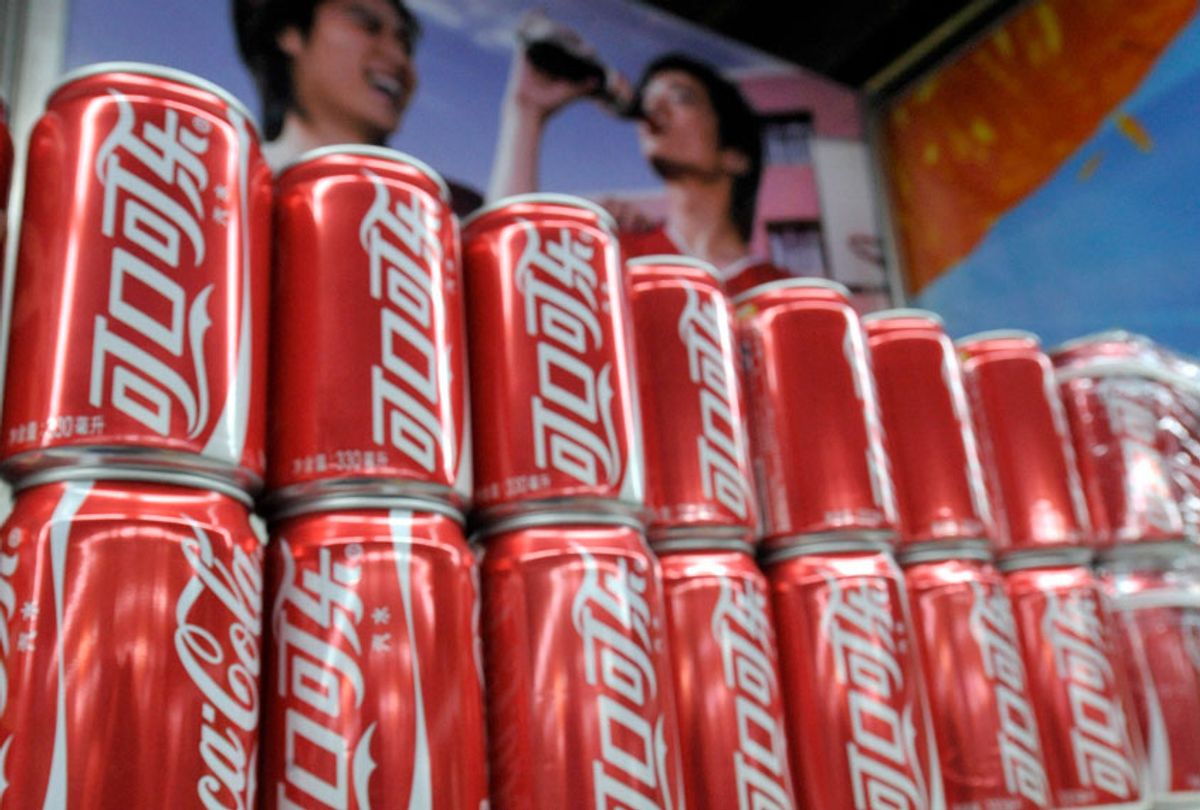 Bottles of Coca-Cola are displayed on the shelves of a store in Beijing. (Getty/Emilie Mocellin)
--

China used to be one of the leanest countries, but since it has become enamored of capitalism, that has changed. As obesity plagues the country, Big Soda has been busy shaping health policies that avoid taxing sugary drinks, according to a study published Wednesday in the Journal of Public Health Policy and The BMJ. Both reports recall a series of New York Times reports from 2015.

Susan Greenhalgh, a social scientist and China scholar who authored or co-authored both academic studies, has spent years trying to unearth the blurry process of science-based policy making in China, especially in regard to how the government handles the obesity crisis. Her findings are based on dozens of interviews with obesity researchers based in Beijing as she sought to better understand the growing Chinese obesity epidemic — a project that turned into a four-year investigation.

Between 1991 and 2011, obesity among both Chinese men and women increased significantly, particularly among Chinese men. The New England Journal of Medicine noted that China had 15 million obese children in 2015, the largest number in the world. Greenhalgh's research revealed that public policy efforts to combat this public health crisis have been driven by an institution known as the International Life Science Institute (ILSI), a research nonprofit that was established by Coca-Cola executive Alex Malaspina in 1978.  Its influence extends beyond China, as it has 17 international branches positioned in emerging markets. Now, the nonprofit is funded by junk food companies, and its funding roster includes Coke, Nestlé, McDonalds, and PepsiCo.

According to the investigation, in 1999, “ILSI asked its branches to put obesity on their agendas, and ILSI-China soon established itself as China’s leading authority on obesity.”

“Between 1999 and 2003, ILSI-China assembled a cadre of obesity specialists, defined obesity as a Chinese disease (with China specific body mass index thresholds), and created guidelines for the prevention and management of obesity and overweight in adults,” Greenhalgh writes. “Those guidelines were issued in the name of the Ministry of Health. “

Even though ILSI-China had prepared the guidelines, the Ministry of Health did not mention their involvement when they were issued. Accordingly, these government guidelines identified obesity as a major health problem, but promoted the message that physical activity was key to ending obesity — not nutrition.

The ILSI model of tripartite academic-government-industry work was now the official approach for fighting chronic disease, with ILSI at the centre. In an environment in which the government had little interest in and few resources to focus on chronic disease, industry members of the ILSI-China family were able to take on enlarged roles in anti-obesity work. Few companies had more interest than Coke. And the company had another advantage: in 2009, ILSI-China created a nine member scientific advisory committee that included company representatives from Coke and three other companies. On paper at least, this made them key decision makers, empowered not just to set research topics but to monitor and essentially police the quality of the science that ILSI-China created.

Over time, and through a complex web of institutional and personal relationships, Coke was able to influence the country’s health policy industry by pushing the message that physical activity was more important than what you ate.

The pair of papers brings to light a global problem in which companies like Coke manipulate policy and lobby against what is best for consumers and in favor of their profit margins.  Gary Sacks, a fellow at the Global Obesity Centre at Deakin University in Australia, told Salon in an email that this report is “not an isolated set of incidents.”

“We have evidence from around the world of Coca Cola using a diverse set of strategies and tactics to influence policies and public opinion in their favor,” he said.

Sacks pointed to a paper which analyzed a 2015 email exchange between former senior executives of Coca-Cola to gain insight into how the food industry influences policy-makers.

“This paper provides direct evidence that senior leaders in the food industry advocate for a deliberate and co-ordinated approach to influencing scientific evidence and expert opinion,” the paper, which was co-authored by Sacks, states. “Importantly, the food industry seeks to do this by co-opting academic contacts, infiltrating major scientific bodies and medical associations, and influencing the generation of scientific evidence.”

Dr. Lennert Veerman, professor of public health at Griffith University's School of Medicine, tells Salon that such tactics are comparable to those of the tobacco industry in the past.

“The tobacco industry has done this, by funding research that investigates ‘anything but tobacco’ as the cause of cancer, and using other means to divert the attention away from their products as the cause of death and disease,” he said in an email. “Parts of the food system employ the same tactics, and Coca Cola’s efforts in China are a case in point.”