"Fyre" review: A compelling, all-access look inside the worst music festival of all-time 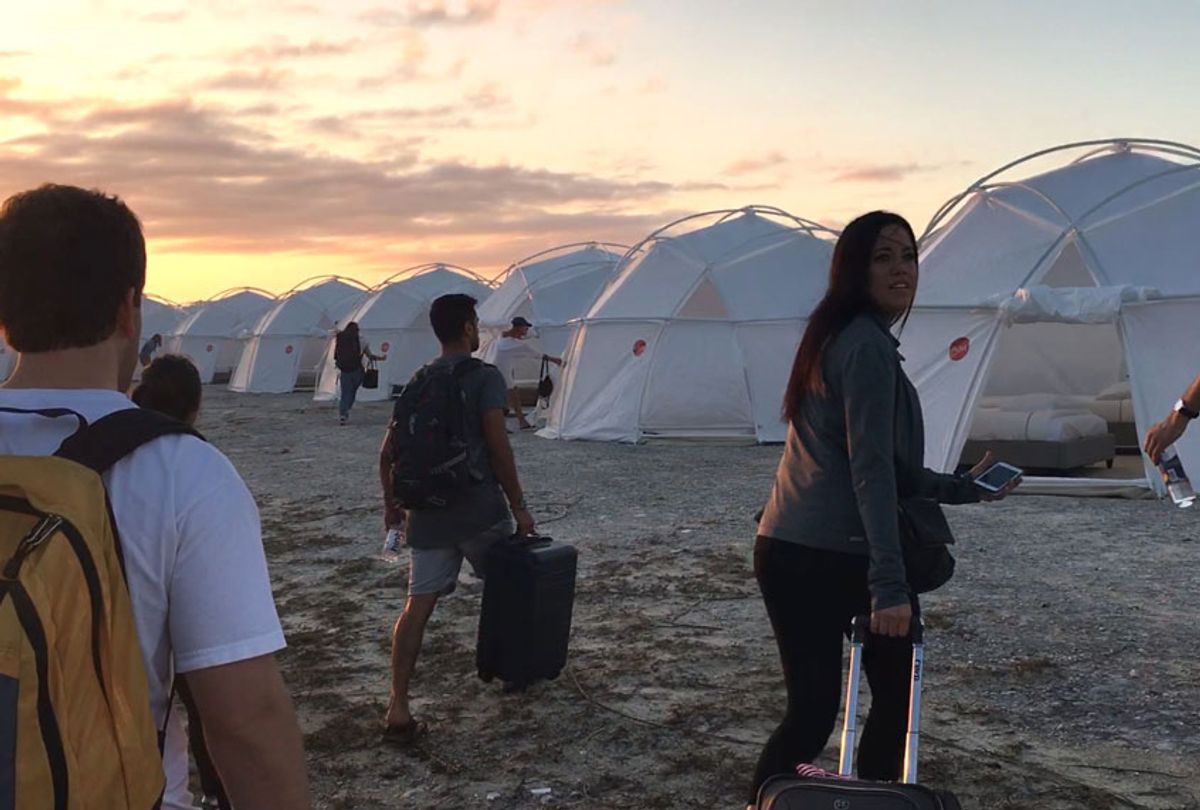 You probably first heard about the Fyre Festival on April 27, 2017, when the Sauron’s Eye of Twitter’s attention turned itself towards the Bahamian island of Great Exuma. A horde of millennials — lured south by a legion of social media influencers, supermodels, and the seductive promise of Blink-182 — thought they were about to become the Lewis’ and Clarks of a new Coachella. Alas, such dreams of a hedonistic beach weekend were soon dashed, as a quick look at the FEMA-quality festival grounds made it clear that these eager party-seekers were more like the Donner Party of tech start-up fiascos.

There were no bands. There was no food. Emily Ratajkowski, Bella Hadid, and the other stars of Fyre’s promotional material were nowhere to be found. A picture of a sad cheese sandwich went viral as the internet exploded with stories about finance bros and duck-faced girls being trapped in a prison of their own indulgences. If schadenfreude were a fuel source, that one day could have powered our planet for 1,000 years. Now, thanks to Netflix, there’s a movie about it.

How — or why — does one make a documentary out of a tragicomic debacle that unfolded on social media in real time, and from a thousand different angles? For filmmaker Chris Smith (“American Movie,” “The Yes Men”), whose work has always been focused on the hazy intersection between tilting at windmills and grifting innocent people, the trick was to see things from the inside out. Reaping the benefits of a generation that compulsively records the evidence of their crimes, “Fyre” exploits a motherlode of private footage that festival mastermind Billy McFarland commissioned throughout the process. It’s less of a snarky recap than a clinical post-mortem.

From the excited first seeds of the idea, to the panicked Skype calls after everything had gone sideways, this straightforward but compellingly journalistic documentary makes perfect sense of how something this stupid could have happened. In doing so, Smith’s film infers that the Fyre Festival wasn’t just a social media phenomenon or a damning indictment of influencer culture (though it was very much both of those things), but also a helpful crystallization of how the internet has weaponized the American Dream, and a discomforting reminder that having the collective sum of human knowledge in the palms of our hands has only made us more desperate to believe in magic.

McFarland knew that he could sell that fantasy like digital snake oil, and he just needed a few celebrities to help him do it. Enter: Ja Rule, who seems to have played a much larger role in kindling Fyre than you might have guessed. The gravel-voiced rapper sure has a memorable screen presence, and his swagger certainly inflamed McFarland’s own ambitions of building a major brand.

One of the first things that Smith’s film clarifies is that the festival itself was actually intended to be a means to an end. It was conceived as a way to promote the Fyre app, a sort of Uber for booking talent. Want Taylor Swift to play at your daughter’s bat mitzvah? Just click on her avatar and send her a few million dollars via Paypal and she’ll be at your house in 10 minutes or less. It’s a questionable idea, but McFarland seems to have sincerely believed in it. Maybe. At least for a little while. One of the more fascinating and open-ended questions that percolates during the course of this documentary: When did McFarland’s pipe dreams twist into a Ponzi scheme? When did Fyre just become a way of paying off (or postponing) the debt that he had incurred with Magnises, the defunct credit card company that was like The Wing for bros who wanted to pretend they had earned a black AmEx?

McFarland himself might not even know the answer; actual impostors are the only ones who seem perfectly immune to Impostor Syndrome. To hear it from McFarland’s small army of embittered former employees, many of whom Smith wrangles here for gobsmacking confessional interviews, their boss suffered from a well-hidden mix of hubris and denial. “He was unflappable but also constantly delusional,” one of the Fire team members says while taking a hard look into their rear-view mirror. “He would not take ‘no’ for an answer, but he would also not take advice.”

It’s unfortunate that Smith couldn’t persuade McFarland, Ja Rule, or any of their hired influencers to sit for interviews, but it’s hard to imagine that anyone is in a hurry to remind the world of their association with such a meme-tastic mess. What “Fyre” loses in comprehensiveness, it makes up for in immediacy; Smith is eager to strike while the iron is hot, but he gives us just enough breathing room to step back and make sense of what happened from a wider perspective. In refusing to assign blame, the filmmaker encourages viewers to come up with their own meshwork of culpability, and to see the festival as symptomatic of broader social failings.

There’s an inescapable Trumpiness to McFarland’s contempt for the people he swindles (“We’re selling a pipe dream to your average loser,” he boasts long before things go south), and that only grows more apparent as McFarland grows more desperate. In one of the most difficult of the film’s many distressing moments, one of the mastermind’s senior partners — a wealthy man in his fifties or sixties — remembers being asked to perform oral sex on someone in order to land an important contract. Elsewhere, McFarland is framed as more of a Zuckerberg-like figure, whose personal foibles spread into a pandemic of misfortune. While Smith’s reliance on the score from “The Social Network” proves distracting, he’s nothing if not sober about the very real damage that’s required for an internet laughingstock.

But if “Fyre” is like a flaming car crash, you can’t help but root for all the victims to get singed. A case could be made against the models who promoted the festival, the influencer culture that empowered them, and even the spend-happy millennials who got conned into paying for it; at the very least, they learned a valuable lesson about the perils of curated fantasies. On the other hand, at a time when it’s hard to trace the line between reality and branded content, and social media platforms are using personal data to sell us back our dreams, it’s only a matter of time before we all get burned.