A surprising trick to ripen bananas quickly for baking

Because patience is a virtue, but so's banana bread on-command 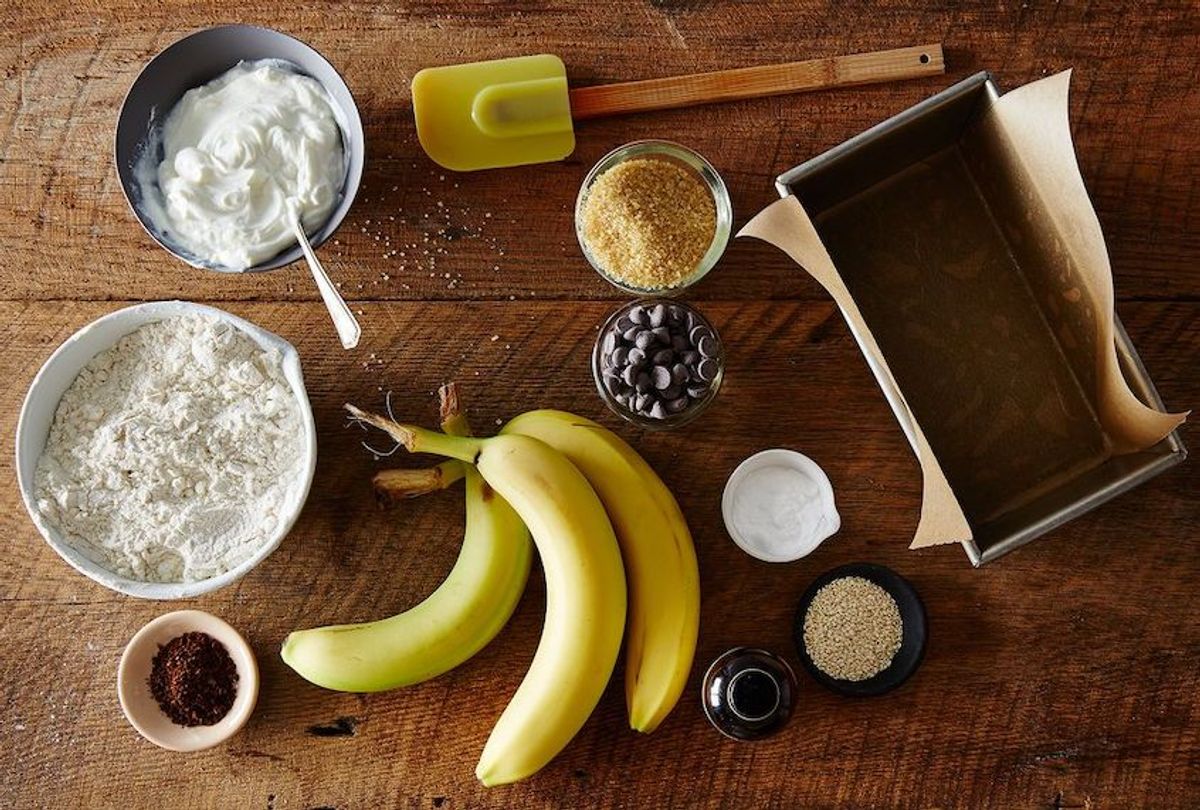 There's a moment right after you decide to make banana bread. You know the one: It's only an instant, but it's long enough to picture 45-minutes-from-now you, curled up under a blanket, eating a slice of perfectly dense, dark-chocolate studded banana bread the size of a salad plate. You're smiling as you imagine it—you can almost taste the bread, feel the soft coziness of the blanket.

And then, if you're anything like me, there's a moment right after that. A slightly darker one. It's the moment when you realize that you actually do not have the "very ripe" bananas called for by your selected recipe because, well, that would've involved a lot of foresight and less haphazard snacking habits. You only have a bunch of firm, bright yellow ones. Things can get pretty ugly, at this point—let's just say, people have been known to react in unpredictable ways:

Unlike my Twitter hero Chrissy Teigen, I don't have an assistant (unless the iPhone Notes app counts?) and proffering a pair of my boyfriend's underwear to a stranger would land somewhere between an aggressive threat and a fineable offense.

So in this second, darker moment, I have only a couple of choices. One: Cancel my dreams of warm banana bread. Mitigate my hanger — barely — by just eating the perky, unripe bananas right then and there, each bite of their off-sweet, basically chewy flesh mocking me as I choke it down. Or two: innovate.

Enter the quick banana-ripening hack: bake them in the oven. An urban legend of sorts, I came across this tip at some point years ago (probably in the same corner of the internet where I learned about the three-second apple peeling trick, and how to slice a log of sugar cookie dough with dental floss). At first, I dismissed it as ludicrous. Baked bananas? Wouldn't that just be baby food?

I dabbled with the baked banana trick's more logical-seeming cousins, instead. The most basic: placing the bananas in a warm spot in the house for a few days. And then, placing the bananas in a sealed paper bag, overnight—the proliferation of ethylene in a fixed space apparently expedites the ripening process. But results were unreliable (probably because the temperatures in my apartment were, too), and worst of all, they weren't exactly quick. Like, need-banana-bread-ASAP, quick.

So, eventually I turned to my oven and gave it a try.

The basic oven-ripening trick goes like this: Place your bananas, still in their peels, on a lined, rimmed baking sheet (because they ooze, sometimes). Turn the oven to 300°F. Bake the bananas until their peels turn black. Let them cool a few minutes before handling, and voila: sweet, mushy bananas for baking.

Despite my dubiousness, my first go of it actually worked fine. I started with bananas that were still quite firm, and lightish yellow. They took close to 20 minutes to turn black at 300°F, which was a big improvement over waiting an indeterminate numbers of hours (sometimes days) for a paper bag to work its magic, or worse still, desperately forgoing banana bread in favor of an immediate snack.

Were they a perfect dupe of naturally ripened bananas? Not exactly. The flavor wasn't quite as deep, and they had a bit of a weird smell that completely dissipated once they were added to my banana bread batter—but the final baked good definitely tasted banana-y.

The team over at Bakepedia reached out to canonical food scientist Harold McGee, who explained why oven-"ripened" bananas aren't exactly like the real thing. He told them:

…from the descriptions I see on the web, I’d call this simple cooking and not ripening. The high heat damages the cells and so weakens and softens the structure; and the indiscriminate mixing of cell components probably does mean that enzymes convert some of the starch to sugars, as happens in baking sweet potatoes. The lower the baking temp and the slower the heating, the more starch conversion there will be, since the enzymes are knocked out as the temperature approaches the boiling point.

In other words, baking your bananas for instant ripening isn't a perfect solution — you'll miss out on some of the starch conversion you'd get from natural ripening. And theoretically speaking, the higher the temperature you use to bake your bananas, the less starch conversation you'll get.

Which explains why I like the results of a lower and slower oven-ripening than of, say, 9 minutes at 400°F. In all of my tinkering with this method, I've found the sweet spot — no pun intended — in terms of baking time and resulting banana flavor/texture to be a 15 to 20 minute bake at 300°F, until the peels are almost black all over, with just a very thin stripe of yellow remaining in the middle.

In a perfect world, I'd someday soon become the type of person who leaves her bananas in a warm spot in the house days before she comes down with a banana bread craving — but in the meantime, this is a pretty solid plan B.