These corals love the warming oceans

Japanese coral communities are expanding in response to warming temperatures, but the effects could be disastrous 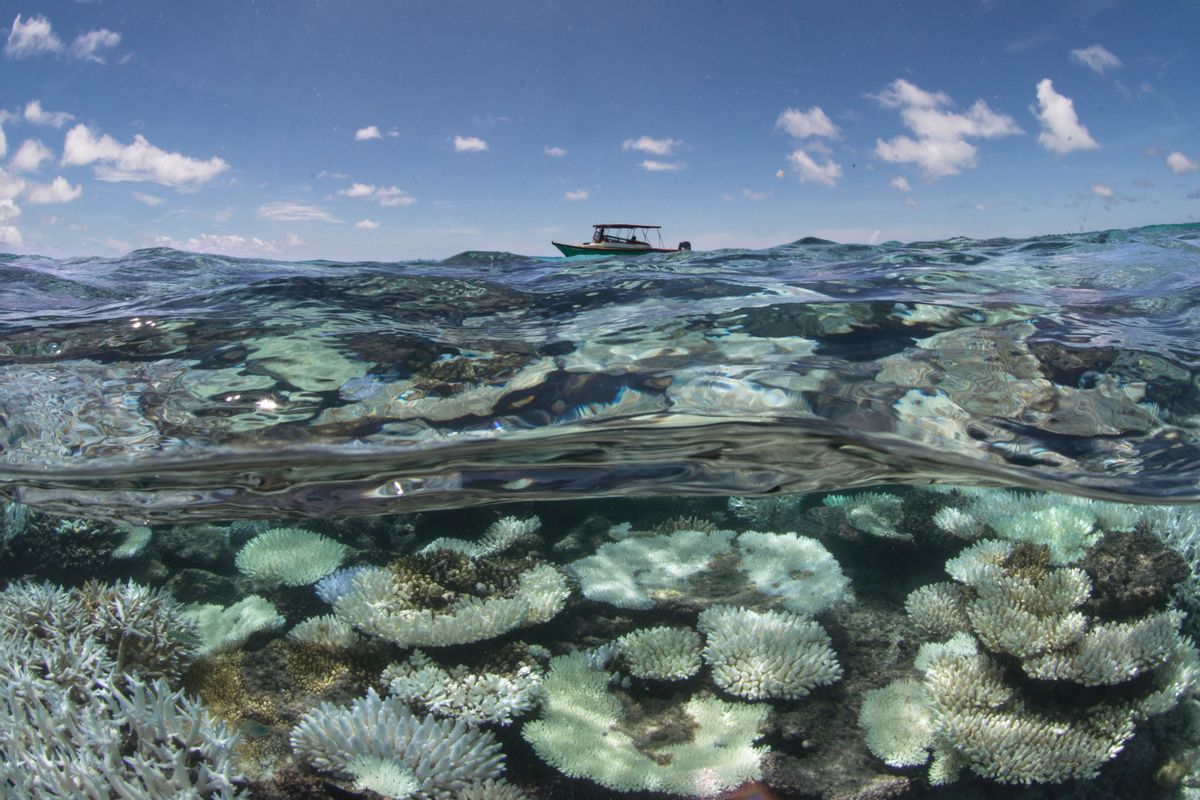 In this May 2016 photo released by The Ocean Agency/XL Catlin Seaview Survey, a boat sails near a coral reef that has been bleached white by heat stress in the Maldives. Coral reefs, unique underwater ecosystems that sustain a quarter of the world's marine species and half a billion people, are dying on an unprecedented scale. Scientists are racing to prevent a complete wipeout within decades. (The Ocean Agency/XL Catlin Seaview Survey via AP) (AP)
--

Ocean temperatures have risen an average of 0.13 degrees Fahrenheit per decade, threatening many of the world’s coral reefs. Mass bleaching events — caused when corals become thermally stressed and expel the symbiotic algae that give corals their vibrant colors — are becoming more frequent and more severe. A 2016 bleaching event, for example, damaged 94 percent of the coral on the Great Barrier Reef.

New research, however, indicates that not all hope is lost for the world’s corals. Researchers found that in some spots, like off the coast of Japan and in the Mediterranean Sea, corals can overtake other species, including seaweed, to establish new habitats. But, at what cost?

Previous research predicted that rising ocean temperatures due to climate change would cause a shift from corals to seaweed in coastal ecosystems. As corals degrade from disturbances such as mass bleaching events, seaweed can enter the habitat and use coral skeletons as substrate to live on. But recent fieldwork suggests that the opposite may be happening: some coastal habitats are beginning to shift from seaweed to corals.

In the Mediterranean Sea, seaweed is usually abundant and corals, historically, cover only about 15 percent of the substrate in the area. But in 2009, researchers discovered that the coral species Oculina patagonica covered more than 50 percent of the randomly sampled 1-square-meter areas at Torre Pirulico in Southeastern Spain. This suggests that a significant shift in community structure took place over just the past few decades.

Along those same lines, a study published in September in the journal Proceedings of the National Academy of Sciences suggests that off the southeastern and southwestern coasts of Japan, corals expanded their habitat ranges over the last 60 years in the face of warming ocean temperatures, displacing kelp that was once abundant in the area.

According to the study, led by researchers at the National Institute for Environmental Studies in Japan, these shifts are likely to continue happening not only in Japan, but also in similar coastal ecosystems across the globe.

Dr. Jorge García Molinos, an Assistant Professor on the research team, commented on the phenomenon of coastal community shifts in an interview with Hokkaido University in Japan: “This ‘tropicalization’ of temperate marine communities is not an isolated phenomenon. It is happening in different places around the world, like in Australia, the Mediterranean, or even in the Arctic where it is called ‘borealization’ instead... Indeed, it is a natural consequence of climate warming at biogeographical transition zones where multiple species live at or close to their distribution limits, like in our case with the corals and kelps.”

To better understand the future effects of rising ocean temperatures on coastal communities, the Japanese researchers then used a model to predict shifts in community structure over the next 15 years. They plugged population survey records from 1950-2015 into their model for different species of kelp, coral, and fish as well as their respective habitat ranges over the years. They also included ocean warming and ocean current trends in their model.

The researchers’ model estimates that fish species will rapidly shift their habitat ranges poleward by 2.5 to 5 miles per year in response to a changing climate, swimming in the direction of both ocean currents and cooler waters. The model also suggests that kelp communities will continue to shrink due to rising ocean temperatures and the presence of these new predators (fish). Corals could then freely expand into these areas, moving in as the kelp communities disappear.

The study stressed that this opportunistic behavior is just one possible mechanism by which coral communities could expand into more northern areas, displacing kelp habitats. The model also suggests that coral communities could expand not only by taking over areas where kelp communities contracted, but also by directly competing with existing kelp communities. Such a direct competition between these two organisms has not yet been recorded, so research is needed to fully understand the consequences of their interactions.

This shift in community structure from kelp to corals might seem great to tourists, like me, who will happily take in the sights of the coral reefs. However, kelp are incredibly important to the marine ecosystem: they are responsible for most of the primary production in the world’s oceans.

Primary production occurs through photosynthesis, during which kelp are able to harness sunlight to make energy. Seaweeds, like kelp, form the basis of the ocean’s food chain, with other organisms relying on seaweeds for food. Without the primary production of seaweeds, the food chain is broken. Such a disruption could lead to decreases in the populations of other organisms, such as fish, that rely on seaweeds for survival. The consequences continue up the food chain, and could lead to the eventual collapse of the ecosystem.

Therefore, while at first glance it appears that the expansion of coral communities, like those described here, are a positive result from rising ocean temperatures, the effects could be disastrous. Changes in coastal community structure and composition in response to climate change pose threats not only to seaweed communities, but also to the functioning of the entire marine ecosystem. While corals are beautiful, without seaweed, the future looks ugly.