What "Broad City" gives us: Celebrating the safe space of Abbi and Ilana before it's gone 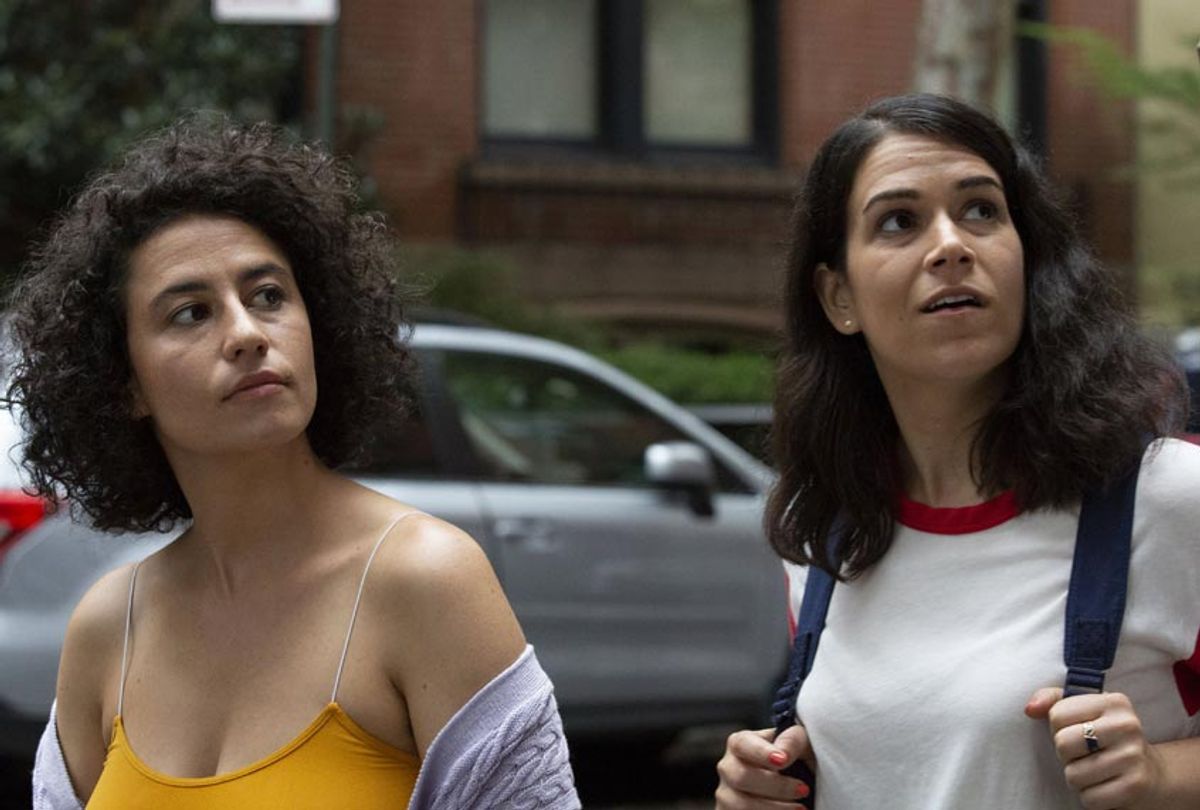 The fifth season opener of Comedy Central's “Broad City” entirely mimics a social media story, told via emojis and butt footage affectionately spliced together into a video — out of love, of course.

Some of the best “Broad City” episodes are day-in-the-life adventures, and this one continues that tradition by marking Abbi’s 30th birthday with a stroll from the northern tip of Manhattan to the south end. Along the way she and Ilana trip and fall, make a few friends and, as they often do, piss people off with their insistent weirdness.

To wit, Abbi and Ilana find a little lost girl in the mall. Bowled over by her cuteness, they innocently play along with her, incorporating scenes into their Instagram-style story. This doesn’t turn out well. On their way to drop the child at security, they each deposit a kiss on her chubby cheeks— which horrifies the girl's mother, who recognizes Abbi from college. Mom, by the way, wears perfect make-up and boutique business casual. Abbi and Ilana are in discount comfort wear, making it easy to sprint away from the security guards who accuse them of being pedophiles.

The world tends to be tough on women with no filter, and doubly so on outspoken women wielding humor in unconventional ways: women who are overtly sexual, women who soil themselves and announce it to the world, women who eroticize every show of affection, even platonic ones. (When referring to how Ilana feels about Abbi, especially the platonic ones.) Ilana has done all of these with Abbi at her side. That’s how we know their love for one another is real.

“Broad City” concludes at the end of this season, and knowing the end is near has thinking about the concept of “safe spaces” these days. That’s a pilloried, cringeworthy term, but maybe that only makes it all the more appropriate when thinking about why this show’s departure will leave a gash.

We all deserve a TV destination that doesn’t make us feel judged and, more importantly, gets us. And for women who don’t have time to care what others think about their bodily functions, who aren’t interested in being told what to do or allowing would-be dictators to rob us of joy or orgasms, this is that show.

Of course, no series truly disappears anymore. “Broad City” is bound for a substantial afterlife by way of any number of outlets: streaming, syndication, who knows? Meanwhile Jacobson and Glazer are leaping into the production realm with an animated series from the show’s writer Gabe Liedman, “Mall Town USA,” and a comedy from David Litt called “Young Professionals.” This is in addition to separate projects, including Jacobson’s series reboot of “A League of the Their Own,” reported to be in development for Amazon.

What we won’t get are fresh pauses to appreciate the shelter and respite Glazer and Jacobson carve out for the messy women of the world who succeed despite consistent attempts to Marie Kondo-lize them into line.

Glazer’s and Jacobson’s fictional selves radiate the kind of singular wildness that can’t be produced by test marketing. Abbi and Ilana took on the world first via Web series before executive producer Amy Poehler brought them to TV.

Five years later the way they thrill, shock and entertain simply by being a raunchy duo living on the edge in New York City is accepted as a standard in entertainment. But that hasn’t always been the case on TV.

Even now, television treats Manhattan as a sparkling landscape where raunch is, for the most part, a relic of an unruly past. The typical TV dream of New York is a high fashion costume fantasy where even the struggling waifs have good cheekbones. Even Brooklyn has long had the color and spice nearly gentrified out of it.

Watching Abbi and Ilana carve out a space for their filthy fabulousness, stomping the pavement beside the Rag & Bone crowd like they own the place, proves there’s room on the same streets claimed in the name of “Girls” and “Sex and the City” for people who scrape their lives together from nothing. Characters developed in a world sculpted by Internet fame should do no less.

“Broad City,” though, isn’t alone in making this kind of safe space.  One of positive result of the Peak TV age is that multiple corners exist for all kinds of women, especially ones who aren’t rich and well-connected.

In the wake of “Broad City”’s TV debut we’ve received “Insecure,” a celebratory and frank look at what it’s like for a black professional woman building a life and flirting with brokenness at times, one that showcases neighborhoods and hot spots in Los Angeles rarely explored on television.

Andrea Savage’s “I’m Sorry” on TruTV gives us a mother whose inner editor occasionally vanishes, making the world quiver in her wake; Netflix’s “Grace & Frankie” focuses on a pair who have come out the other side of marriages and decades where they lived lives society prescribed for them, or rebelled in fairly pedestrian ways. On FX, “Better Things” is a place of understanding for parents who are still in the midst of life’s muddle of expectations and feelings.

Even as each of these shows about and by women maintain comfort zones for the audience that don’t exist anywhere else, they maintain a sense of intentional order about them. Credit or blame “Sex and the City,” and the fashion industry that inspired and drew influence from it, for the unspoken rule that funny women must in some way return to a sense of decorum in what they wear.

That’s been true since the days of Mary and Rhoda, though.

Although each of these characters’ lives spin into chaos at some point — that’s where the comedy is born — they never look spun-out for long. Their mess is temporary and we always get an explanation as to why it’s on them.

“Broad City,” meanwhile, embraces the joyous filth of Abbi and Ilana as part of the imperfect realness of the struggle of getting to 30 and the inevitable fumbling that comes with that adventure.

That's putting it politely; the joy of Ilana is that she’s outright gross and doesn’t try to hide it.

Of course that word, gross, is a matter of interpretation. What they really are, if you want to look at it another way, is accepting and adoring of their humanity. Where “Girls” is a long exercise in navel gazing (full disclosure, I was never a fan) “Broad City” is a place where women can love and laugh at belly buttons, nips, folds and farts.

Its feminism is rooted in its love of the funny, weird things women’s bodies do, just like men’s. Its feminism also rests in its loyalty to other women, even ones who can’t stand them.

Case in point: when confronted for a second time by the college rival, who is living the Town & Country minivan life to which women are supposed to aspire, Abbi and Ilana can’t even reply to her insults in kind. They read her the riot act by way of pointing out how amazing her life looks in her online profile.

“And excuse me: four children and you look like this?” Ilana spews in a voice dripping with even measures of awe and venom. “You look unbelievable. You are literally woman magic. So f**k you!”

The rival's response is to dissolve into a quivering pile of self-doubt. In her view, she’s not magical at all. Abbi and Ilana reassure her she is, sending her on her way before enjoying a triple rainbow in the sky. They view this with their own eyes — no electronic lens, emoji tricks or filters, but simply as being part of a world, in a place they created and enjoy in all its sweaty, strange wonder. It’s a moment that will never occur for the characters again, but “Broad City” makes sure the audience can always find refuge inside of it.