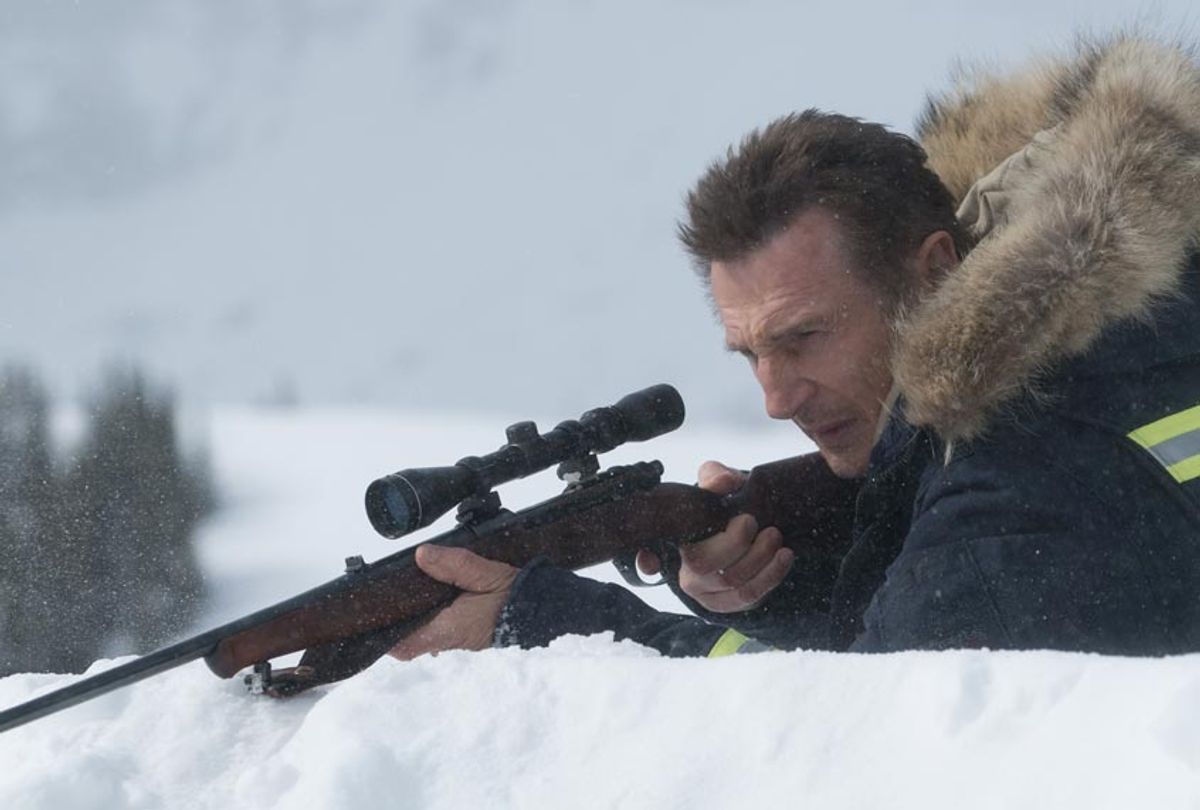 “Cold Pursuit” might have all the trappings of those junky late-era Liam Neeson movies where the aging Irish actor murders a small army of people like some kind of AARP-eligible Rambo, but Hans Petter Moland’s mordantly hilarious comic thriller doesn’t wait long to defile expectations. The fact that it opens with an Oscar Wilde quote should be enough to confuse anyone who’s bracing for another tedious riff on “Taken.” The quote reads: “Some cause happiness wherever they go; others whenever they go,” and while that may seem like a pretentious little preamble for a film that features Neeson shooting a bridal shop clerk in the face with a sawed-off sniper rifle, it turns out to be the perfect table-setting for a fiendishly entertaining, pitch-black revenge story about a decent man who develops a violent knack for being the worst the worst part of anyone’s day.

Neeson stars as a taciturn snowplow driver called Nels Coxman. His given name is a nod to the fact that the character was first conceived as a Norwegian man (played by Stellan Skarsgård in Moland’s similar but somewhat less satisfying 2014 original, “In Order of Disappearance”). His surname is there so that other characters can joke about how this deathly serious public servant sounds like a porn star. Nels may not be much of a talker, but he seems like a decent man; he even wins Citizen of the Year from the grateful residents of Kehoe, Colorado, who wouldn’t be able to reach their remote corner of the world if not for Nels’ diligent work. Also he’s married to Laura Dern, which some people say is the ultimate sign of a solid human being. Of course, it’s a lot easier to be a good man if bad things have never happened to you.

Bad things are about to happen to Nels. Some lackeys from a Denver drug cartel murder his son, and that has a funny way of changing a few things about his character. To add insult to injury, his woefully underwritten wife is so overwhelmed by grief that she leaves her husband (and his movie) as soon as the casket is closed. That’s about as much as a man can take, but when a well-informed witness interrupts Nels’ visceral and chilling suicide attempt, our hero decides that he’s going to take some of it back. Oblivious to the fact that his kid was collateral damage in a long-simmering turf war between two rival syndicates, Nels follows one of the goons back to the cartel’s big city headquarters and starts killing his way up the corporate ladder.

Read more IndieWire: ‘Made in Italy’: Liam Neeson to Use His Particular Set of Skills in a Comedy for a Change

As in the original, Moland wryly marks each death with a title card that includes the name of the deceased and a cute little illustration to denote their faith. Brace yourself for a lot of reading, because “Cold Pursuit” is an absolute bloodbath.

Denver might not boast the world’s biggest criminal underworld, but there’s a small army of henchmen standing between Nels and his ultimate target, a sniveling psychopath called Viking (who British actor Tom Bateman plays like a cross between Christian Grey and Joffrey Baratheon). Reinvented as an entitled white American man who just whines and hurts people whenever he doesn’t get his way, Viking is worlds removed from your typical movie drug lord in several different respects. For one thing, he’s got partial custody over a young son who gets driven to school by henchmen every morning. For another, those henchmen of his are an unexpectedly lovable bunch of hired guns, all of whom get a chance to shine before they’re shot (and two of whom are even in love with each other, however difficult it may be to keep that a secret from their trigger-happy boss).

But Viking isn’t the only game in town. On the other side of the proverbial fence sits a deadpan and deadly cabal of Native American gangsters, whose moral authority is muddled by their impressive capacity for dismembering people. Led by a steely old-timer named White Bull (half-Cree actor Tom Jackson), the indigenous gang sub in for the Serbians in the original, and the new context they bring with them — the pain of being othered on one’s own land — allows “Cold Pursuit” to push deeper into the gray areas of moral relativism than “In Order of Disappearance” ever could. There are no good guys to be found in this movie; even a wide-eyed young police officer played by Emmy Rossum has something to be sorry for (though it must be said that the story’s women girls consistently much smarter than its boys).

That’s one thing that all of the characters in “Cold Pursuit” have in common. Another — at least among the men — is that all of the various sons inherit legacies of violence from their fathers, while all of the fathers agree to put their sons in harm’s way (that may not be a uniquely American phenomenon, but it sure has a way of pronouncing itself in this country). And while Neeson disappears for long stretches during the middle of the movie as the chain-reaction of revenge killings begins to take care of itself, it’s more than a little touching when Nels crosses paths with Viking’s kid and the two begin to look after each other in a way their own blood never could. This twisted revenge saga might argue that it’s convenient to have an enemy, but Moland knows that it’s a much better investment to make a friend.

For a movie so frigid (and so viscerally shot in the snowy peaks of Alberta’s Fortress Mountains), Moland’s remake is at its best whenever it pauses for a moment of warmth. No matter how gory things get, there’s always time for a flight of fancy —sometimes quite literally. When other films of this kind might be hurtling towards the climactic shootout, this one slows down so that White Bull’s men can have a snowball fight. It all ends in mirthful carnage, of course, and the grand finale is a bit underwhelming after all the gruesomeness that comes first (the action here is almost beside the point, but it’s still handled poorly). Still, “Cold Pursuit” resolves as a riotously fun example of a director remaking their own film for the right reasons.

Lionsgate will release “Cold Pursuit” in theaters on Friday, February 8.