The Byrds and CSNY singer and guitarist has never held back, but A.J. Eaton's reflective film goes even deeper 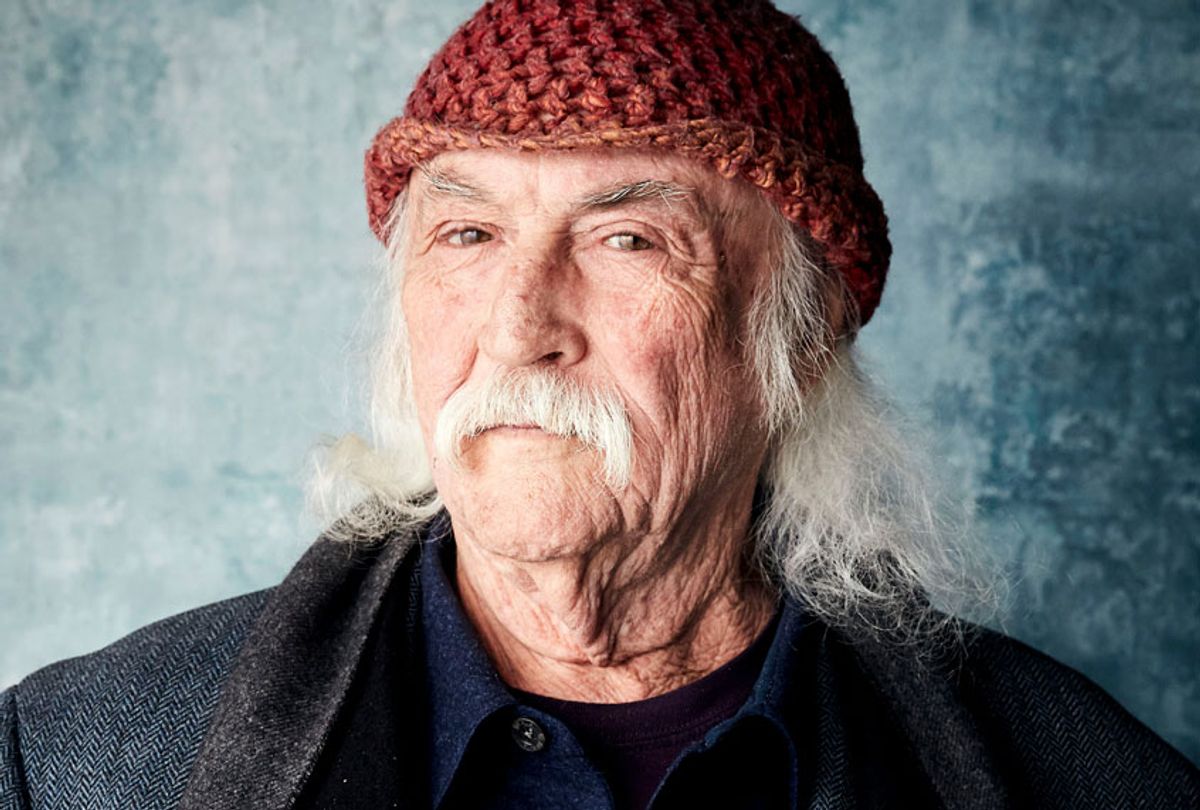 Legendary rocker David Crosby has never been one to mince words, but in A.J. Eaton’s startlingly intimate documentary “David Crosby: Remember My Name,” the singer and guitarist finally uses his words to tap into something long-necessary: genuine self-reflection. Eaton’s film goes deep with the musician, and quickly. Within the first five minutes of “Remember My Name,” Crosby has already confessed twice how fervently he does not want to die (the concerns are real, as his wife Jan ticks off his many ailments, from a liver transplant to diabetes) and how deeply he regrets some of the wildness of his earlier years.

“Yeah, I got a huge regret about the time I wasted, smashed,” Crosby says straight to the camera, and that’s putting it mildly. A compelling mix of literal walking tour — “Remember My Name” features Crosby ambling straight up to Joni Mitchell’s old house in its first act, and good luck not feeling chills with that one — and interviews with Crosby and his contemporaries, the effect is a full-bodied one. But it’s Crosby, of course, who drives the story forward, his story, told on his terms.

Tracing his early life (including a few musings on how his family makeup contributed to his motivations, Crosby’s dad was hardly the affectionate type, while his mother seemed to be a deep feeler) through his “creative rebirth” in his seventh decade, even at just 95 minutes, the film covers plenty of ground. The typical trappings of a reflective documentary about a larger-than-life star are all there, from nods to the weight of stardom and how political leanings can both help and harm a talent on the rise, but they’re made bigger and richer because it’s Crosby who is acknowledging them, unblinking.

And yet Crosby’s willingness to talk should never be mistaken for a willingness to behave, and the film is peppered with amusing (and, in their own way, insightful) moments in which he tries to take the reins of the production for himself. “There isn’t a shot!” he barks at Eaton’s crew as they stroll outside the Laurel Canyon Country Store, the apex of so much of Crosby’s early musical life, convinced there is nothing inherently cinematic about watching him walk around a dusty sidewalk.

Cameron Crowe, who serves as a producer as well, conducts the core interviews with Crosby in the film. His probing questions are often included in the footage (sometimes, Crowe even leans so far forward to get an answer that the back of his head is visible; it’s hard to blame his engagement), and he attempts to get Crosby to contextualize the importance of the store as a gathering place for the neighborhood’s many stars. Crosby doesn’t buy it: this was just the place where they brought groceries, and they only moved to Laurel Canyon to get away from the smog. Stop looking for meaning where there isn’t any.

Read More IndieWire: David Crosby on What It Would Take to Repair the Relationship With Stills, Nash & Young — IndieWire Sundance Studio

There is, however, meaning just moments later, when Crosby and crew visit Mitchell’s old house. Crosby can’t escape the weight of history there, especially as he recounts the creation story of Crosby, Stills & Nash, gazing up at the room where it happened. As they depart the property, Crosby removes his mic and titters, “mic drop!” In an already emotional film, it’s one of the most haunting scenes.

While Crosby’s many interviews are the heart and soul of the film, Eaton has underpinned “Remember My Name” with other talent chats, both archival (Neil Young, for instance, appears in a 2000 interview, while Graham Nash is in one from 1990) and recent (photographer Henry Dlitz sits next to Crosby on the same day as the Laurel Canyon visit). Crosby’s legacy is entirely intertwined with his current feud with some of the seminal people in his life (like both Young and Nash), and Eaton smartly navigates the lack of input from such figures.

Less successful are a handful of animated recreations that chronicle scenes that no one would ever record — like when he was kicked out of The Byrds or when he fled an imminent FBI arrest — but they’re swiftly forgotten in the face of long-form sequences in which Crosby gets deep about some of the most horrific portions of his history. From the tragic death of his girlfriend Christine Hinton to his drug addictions, Crosby and Eaton don’t balk at talking about every inch of Crosby’s full, if challenging life.

Most inspring, however, is Crosby’s desperation to keep living, moving, and growing. It’s raw and entirely human. “Time is the final currency,” Crosby says early in Eaton’s film. “And so, how do you spend it?” He might not have it totally figured that out just yet, but no one else stands a better chance of getting there, someday.

"David Crosby: Remember My Name” premiered at the 2019 Sundance Film Festival. Sony Pictures Classics acquired it at the festival and will distribute it later this year.