Bad people make for good film, but this portrait of Donald Trump's personal hero proves that bio-docs are in crisis 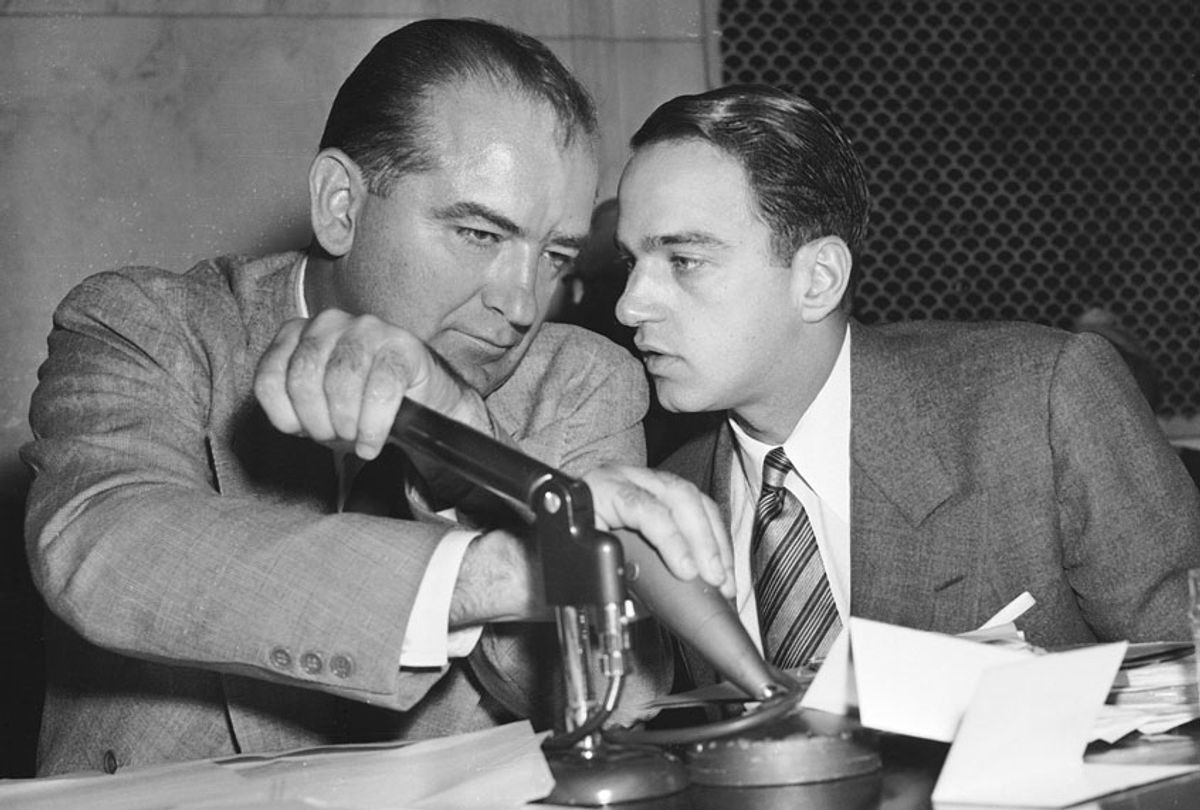 Senator Joseph McCarthy has a whispered discussion with Roy Cohn during a committee hearing on April 26, 1954, in Washington. (AP Photo)
--

Bad people tend to make for good documentaries, and Roy Cohn was one of the worst. A conniving Rasputin figure who advised Senator Joseph McCarthy, forged Donald Trump into the man-like thing he is today, and cravenly laid the groundwork for a political climate that encourages the pursuit of power at the expense of foundational American principles, the infamous “fixer” left this mortal coil with a well-earned reputation for being as morally bankrupt as anyone who ever walked the earth. And yet,  Matt Tyrnauer’s “Where’s My Roy Cohn?” — while erudite, well-researched, and all too relevant — is an unilluminating chore to watch, even as it convincingly argues the profound extent to which its subject helped blemish the moral complexion of the modern world.

As a lawyer, Cohn overpowered the legal system with the brute force of his ad hominem attacks and backstage maneuverings (he would say that knowing the law was less important than knowing the judge). He made his name by engineering the executions of Julius and Ethel Rosenberg, despite inconclusive evidence of the latter’s guilt, and bronzed his legend by defending the current President against (proven) charges that he refused to rent apartments to black families.

As a closeted homosexual, Cohn was at the forefront of “The Lavender Scare,” and convinced Dwight D. Eisenhower to ban all gay men from working in the federal government; when dying from AIDS-related complications several decades later, he insisted that he was suffering from liver cancer, and used his celebrity to provoke contempt for other victims of the growing plague.

Read More IndieWire: Tilda Swinton’s Daughter Is a Major Breakout, But She’s Hiding From the Spotlight at Sundance

Cohn had an unparalleled talent for making the worst of every bad situation. He always attacked, he never surrendered, and his Machiavellian zealotry has proven so enduringly poisonous it’s as if he’s still here. Cohn didn’t die so much as he dissolved himself into the fabric of the country he loathed with every fiber of his being, and — like many people who changed the world — he only did so as a byproduct of trying to outwrestle his own insecurities and lack of self-worth.

As his previous features (“Studio 54,” “Valentino: The Last Emperor”) made perfectly clear, Tyrnauer’s hyper-competent films are shaped by a journalistic bent; they’re more interested in preserving the cultural history of the 20th century than in looking at it from a unique point of view. In that respect, Tyrnauer is a product of his times rather than a pernicious outlier who’s lowering the bar for the nonfiction community. In the wake of recent hits like “RBG” and “Won’t You Be My Neighbor?” (hardly the first documentaries to distill the life of an iconoclast into a straightforward account of what they did with it), it seems that people are only growing more eager to pay for womb-to-tomb biographies they could read for free on Wikipedia. These are films that proffer basic reminders and broad moral judgement (“Remember Mr. Rogers? He was good”) in place of actual perspectives; the more of them we get, the more alike they seem.

“Where’s My Roy Cohn?,” which borrows its title from a question the current President of the United States asked his minions when they failed to stop attorney general Jeff Sessions from recusing himself from the Russia investigation, is so familiar that it illustrates how these documentaries subscribe to the same formula: A flurry of clips from the height of their subject’s fame is followed by a title treatment, a trip back in time to their formative years, and then an amuse-bouche of interviews and archival footage to guide a chronological tour of the critical events that followed. New Yorker writer Ken Auletta, one of Tyrnaeur’s most helpful talking heads, showed up in at least three films at Sundance this year; he may even have been wearing the same sweater in all of them. Most of these movies also build toward a closing argument for relevancy and/or inspiration, and mine the brunt of their emotion from their composers instead of their content (a great Michael Nyman score can truly hide all manner of sins). Watch enough of them, and they start to congeal into a singularity of American greatness. An extraordinary array of rule-breakers and revolutionaries all seem to have lived the same lives.

“Where’s My Roy Cohn?” is hardly the worst of these works; it’s not even close, as Tyrnauer has a knack for pacing, and a talent for organizing archival footage so that it feels like the various clips are speaking to each other. Even in old photographs, Cohn’s glassy sky-blue eyes seem as though they can see right through you, and this film collects plenty of compelling testimony to their deadening effect. (Roger Stone feels like a real coup, and his exclusivity as an interview subject is only going to become more valuable from here.) The documentary only gets more engrossing as it goes along; the most vital bits are reserved for the bitter end, when — even in death — Cohn still refuses to admit defeat.

Nevertheless, there’s a reason why this particular film feels like the straw that broke the camel’s back, and proves that we may have reached a saturation point: Roy Cohn isn’t a complicated hero like Hedy Lamarr, Nina Simone, or Alexander McQueen (to name just a few of the countless people who were biographical documentary subjects in recent years), but rather a decidedly uncomplicated villain. “Remember Roy Cohn? He was bad. And now he’s back.”

We don’t have to be convinced of this ghoulish figure’s enduring relevance, because we see evidence of it on cable news every day. Viewers unfamiliar with Cohn’s legacy will learn how to recognize it, but to what end? The past may be the most essential tool for understanding the present, but what value is there in processing Trump’s greatest influence through a petrified, backwards-facing documentary format that refuses to pass any real judgement? Why spend so much time marveling at Cohn’s uncaged audacity when Tyrnaeur could draw real conclusions about how the world allowed for and responded to it? Told without even a fraction of its subject’s dark talent for subverting American norms and bending reality to his will, the film inevitably focuses more on what our country reveals about Roy Cohn than on what Roy Cohn reveals about our country.

“Where’s My Roy Cohn?” premiered at the 2019 Sundance Film Festival. It will be released by Sony Pictures Classics later this year.