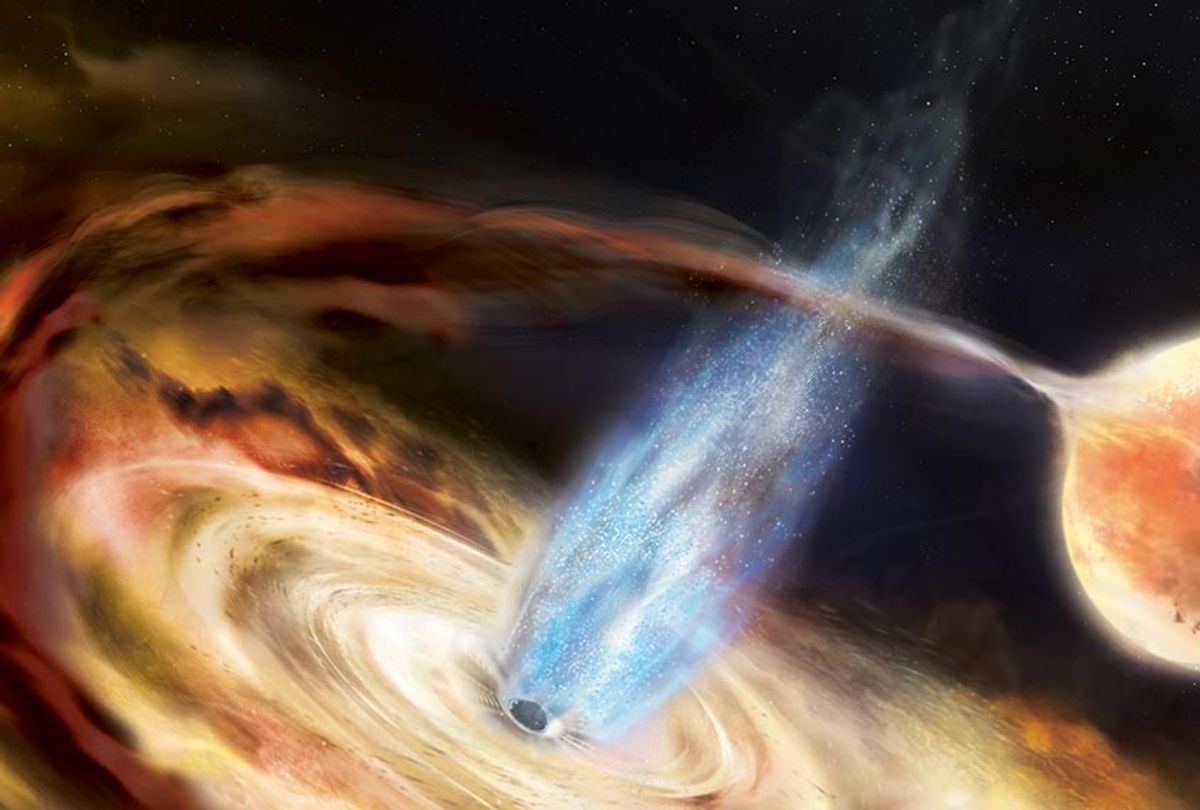 Though we have plenty of data confirming that they exist, humanity has never directly seen an image of a black hole, the mysterious singularities that warp the spacetime continuum by virtue of their huge masses, producing such gravitational force that not even light can escape .

There have been many simulations and illustrations based on observations — including scientifically-inspired simulations of what the accretion disk might look like, such as the one depicted in the Christopher Nolan movie “Interstellar” —  but astronomers to this day don’t truly know what a black hole looks like, or, more accurately, what their “shadow” looks like. (Note that imaging a black hole directly is impossible, given that they do not emit light; rather, astronomers aim to capture the matter that swirls around them at incredible speed due to their immense gravity, and which often radiates light.) Now, astronomers believe they are on the verge of attaining the first direct image of a black hole’s silhouette, based on observations made by the Event Horizon Telescope (EHT), which are expected to be unveiled this year.

When and if that happens remains unclear. Sera Markoff, a professor of theoretical astrophysics and astroparticle physics at the University of Amsterdam, and co-lead of the EHT’s Multiwavelength Working Group, told Salon in an email researchers expect the results “to come out in the first half of 2019.” Markoff told the Guardian earlier this month that scientists managed to capture “very high-quality data at the very high resolutions necessary to observe the [black hole’s] shadow, if it’s really there,” which indicated that the data is awaiting processing. If their observational data proves sound, Markoff says that “everything needs to undergo careful review and be vetted by scientists external to the EHT collaboration, as part of the standard process of peer-review for any scientific publication,” as she explained to Salon.

Assuming this works out,  it would mark an unprecedented moment in scientific history, as scientists have simulated and speculated about these kinds of images since the idea of a black hole was formulated in the late 1700s. The vague idea of a black hole — meaning, a singularity so dense and so massive that its escape velocity is greater than the speed of light — was first theorized by English scientist John Michell in the 18th century, and later developed further by Albert Einstein in the 20th century in his General Theory of Relativity.  Yet despite technological advancements in astronomical imaging, black holes have remained an enigma, partly because they are so compact and dense, meaning a telescope the size of Earth would be needed to directly observe even the closest one.

“The size of the shadow that even our nearest supermassive black holes would imprint on the sky is very tiny,” Markoff explained to Salon. “Think about the size of the moon…it depends on its size and distance, and if you moved the moon far away it would appear smaller and smaller until finally you couldn’t see it with your eyes, and then you would need a telescope. And if you kept moving it further, you’d eventually need better telescopes to see it, until finally even that wouldn’t be possible.”

In the case of the EHT, scientists have assembled an array of smaller telescopes that collectively act like a one big one.

“They observe at a wavelength of 1.3 mm in the radio band, with stations in Chile, Hawaii, Arizona, Mexico, Spain, and the Antarctic,” Markoff explained. “Basically getting this experiment organized and tested was a long journey and required technological and computing developments that just didn’t exist until very recently. Then of course any new experiment needs to be very carefully tested and calibrated, which cannot be rushed.”

Abraham Loeb, professor and chair of astronomy at the Harvard-Smithsonian Center for Astrophysics, explained to Salon in an email how the observatories work together to make an Earth-size telescope.

“Observatories operating at millimeter wavelengths enable the highest angular resolution because they are spread on the scale of the Earth, making effectively an aperture of that size,” Loeb said. “For the first time, the Event Horizon Telescope combines sufficient millimeter observatories at large enough separation to get image the silhouette of the black holes in the Milky Way (SgrA*) and M87.” Loeb alluded to the supermassive black hole at the center of the Milky Way, Sagittarius A*, which is 26,000 light-years away and has 4 million times the sun’s mass, and around which all stars in the Milky Way orbit. Most galaxies are believed to have a supermassive black hole at their center upon which they pivot.

Black holes are also invisible, technically speaking, which has been a barrier to capturing a real image of their environs. Loeb explained that a black hole acts as “a drain into which gas falls in as it circles around like water in a bathtub,” adding that the gas then “dissipates its rotational motion through turbulent viscosity.”

From there, the black hole–accelerated gas heats up as it whips around the black hole, which causes it to radiate a wide range of frequencies. Radiation is then emitted from behind the black hole and absorbed, which can cause the appearance of a silhouette, and which EHT is expected to image.

“Radiation emitted behind the black hole is absorbed by it, [and] causes the appearance of a silhouette, a dark shadow compared to the surroundings,” Loeb said. “On one side of the shadow we see material moving towards us whereas on the other side we see material receding away from us. Relativistic beaming of the radiation makes the approaching side much brighter, making the appearance of a moon crescent.”

Black holes have often been depicted as something far more complex, à la the fictional black hole Gargantua that serves as a time travel plot device in the movie “Interstellar,” but it is unclear if the image stitched together from EHT data will resemble something similar to that film’s intricate CGI creation. In addition to producing a refined image of a black hole shadow, Loeb hopes more details regarding the mechanics of a black hole will be revealed in imaging, too.

“Since LIGO [Laser Interferometer Gravitational-Wave Observatory] already informed us that the spacetime around [a] black hole is close to that expected from Einstein's theory of gravity, I hope that the EHT data will pin down the astrophysical details of gas accretion and jet launch around supermassive black holes,” Loeb said. “Karl Schwarzschild and Albert Einstein would have been thrilled to see this image, just a century after the black hole idea was mathematically formulated.”