The "Taken" actor says after a loved one said she was raped, he considered killing a black person in revenge 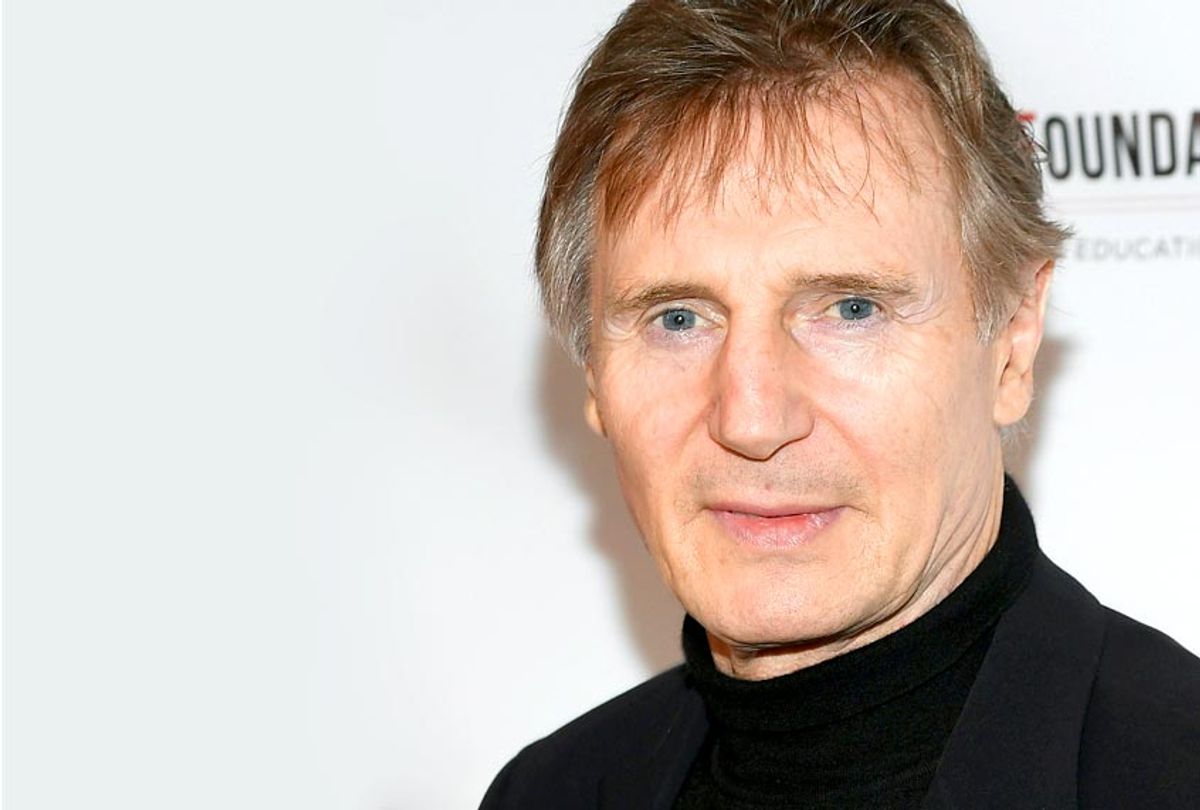 In a shocking and disturbing revelation, Liam Neeson, currently giving interviews to promote his latest film "Cold Pursuit," recounted a time many years ago where he actively sought to enact a racist killing after someone close to him was allegedly raped by a black man.

"I’ll tell you a story. This is true," the actor told journalist Clémence Michallon in an interview with the Independent. Neeson began by saying that he had just returned from a trip overseas when the woman, whom he did not identify, told him that she had been raped.

"She handled the situation of the rape in the most extraordinary way," he continued. "But my immediate reaction was. . ." Neeson paused, according to the Independent, before divulging that he asked if she knew who the alleged assailant was, to which she told him no. "What colour [sic] were they?" he said he asked next. "She said it was a black person."

On what Neeson said he did next:

"I went up and down areas with a cosh, hoping I’d be approached by somebody – I’m ashamed to say that – and I did it for maybe a week, hoping some [Neeson gestures air quotes with his fingers] 'black bastard' would come out of a pub and have a go at me about something, you know? So that I could," another pause, "kill him."

"It was horrible, horrible, when I think back, that I did that," Neeson continued. "And I’ve never admitted that, and I’m saying it to a journalist. God forbid."

At this point in the interview, Neeson attempted to offer a reason for why he shared such a harrowing admission. "It’s awful," he added. "But I did learn a lesson from it, when I eventually thought, 'What the f**k are you doing,' you know?"

Neeson continued: "I come from a society – I grew up in Northern Ireland in the Troubles – and, you know, I knew a couple of guys that died on hunger strike, and I had acquaintances who were very caught up in the Troubles, and I understand that need for revenge, but it just leads to more revenge, to more killing and more killing, and Northern Ireland’s proof of that. All this stuff that’s happening in the world, the violence, is proof of that, you know. But that primal need, I understand."

"Cold Pursuit" is apparently about revenge; Neeson's son in the film is killed by a drug gang. "I think audience members live to see [that violence on screen]," Neeson said. "They can kind of live vicariously through it. People say, 'Yeah but violence in films makes people want to go out and kill people.' I don’t believe that at all."

"I think the average moviegoer thinks, 'Yeah, punch him. Punch him.' And they get a satisfaction out of seeing somebody else enact it, and they leave the theatre and they feel satiated in some way," he concluded.

Neeson refused to elaborate or contextualize the story further, even after the Independent reporter contacted his publicist for more clarification.

So, why this story now? Did he offer this abhorrent story to illustrate that he can intimately relate to the revenge-seeking characters that he plays over and over again on film? If his story was supposed to demonstrate how easily inflamed the visceral and natural feelings of violent revenge can be, Neeson's motivation in relaying the tale is completely obscured by the racism it reveals.

Did Neeson assume that a certain audience for this interview would be sympathetic, or even find his anecdote relatable? How comfortable one must be in whiteness and privilege to even share a story like this in such a way.

If Neeson's loved one had told him her rapist was a white man, would he have roamed the streets with a weapon in hand searching for a random white jerk to bludgeon? Most likely no. In the Western world, only the actions of minorities are seen as representative of their larger communities and thus, one's entire community becomes deserving of both scrutiny and punishment. We see this narrative elevated over and over again, especially when those in power use a lone act of violence from a Central American migrant, or a Muslim, or a black person to promote racist rhetoric and implement further oppressive policies.

Yet even for people without policy-making power, but whose whiteness wields much authority — like Neeson — this way of thinking encourages dangerous and erroneous ideas about marginalized communities and pathology, which then breeds and justifies violence against them.

In contrast, a white person is always given the benefit of individuality — from other white people especially — no matter how heinous the person's actions, from a white supremacist who murders nine people in cold blood at a place of worship to a white supremacist in the highest office of the United States.

(There's a whole other story to be written here about how problematic, gendered and violent his reaction is to the sexual violence survivor he was supposedly seeking revenge for, too.)

I don't know what Liam Neeson expected the takeaway to be from this memory he shared, seemingly out of nowhere in the middle of an otherwise routine junket appearance. He admits his actions were "horrible, horrible," but doesn't offer specifics on why, which raises questions about which parts of this story exactly he was "ashamed to say" aloud.

Neeson's follow-up remarks on the lesson he says he learned — that "revenge . . . just leads to more revenge, to more killing and more killing" — are disturbingly devoid of reflection on the deep-rooted racist beliefs about black people that came devastatingly close to guiding him to kill a stranger in cold blood.

However, one thing Neeson's story does illuminate — painfully — is how mortally dangerous it is to be a racial minority living in a racist society. As scholar Ruth Wilson Gilmore defined it, "racism, specifically, is the state-sanctioned or extralegal production and exploitation of group-differentiated vulnerability to premature death."

So, whether Neeson's personal ideas about race have evolved, as he seems to suggest, they nonetheless remain pervasive beyond the heart and mind of this individual — entrenched in the criminal justice system, education, housing, and more, dictating access, resources and survival. And contrary to what Neeson initially seemed to believe, his anecdote revealed nothing about blackness or revenge, but everything about how whiteness functions.