Lunar New Year: A feast for the gods and family 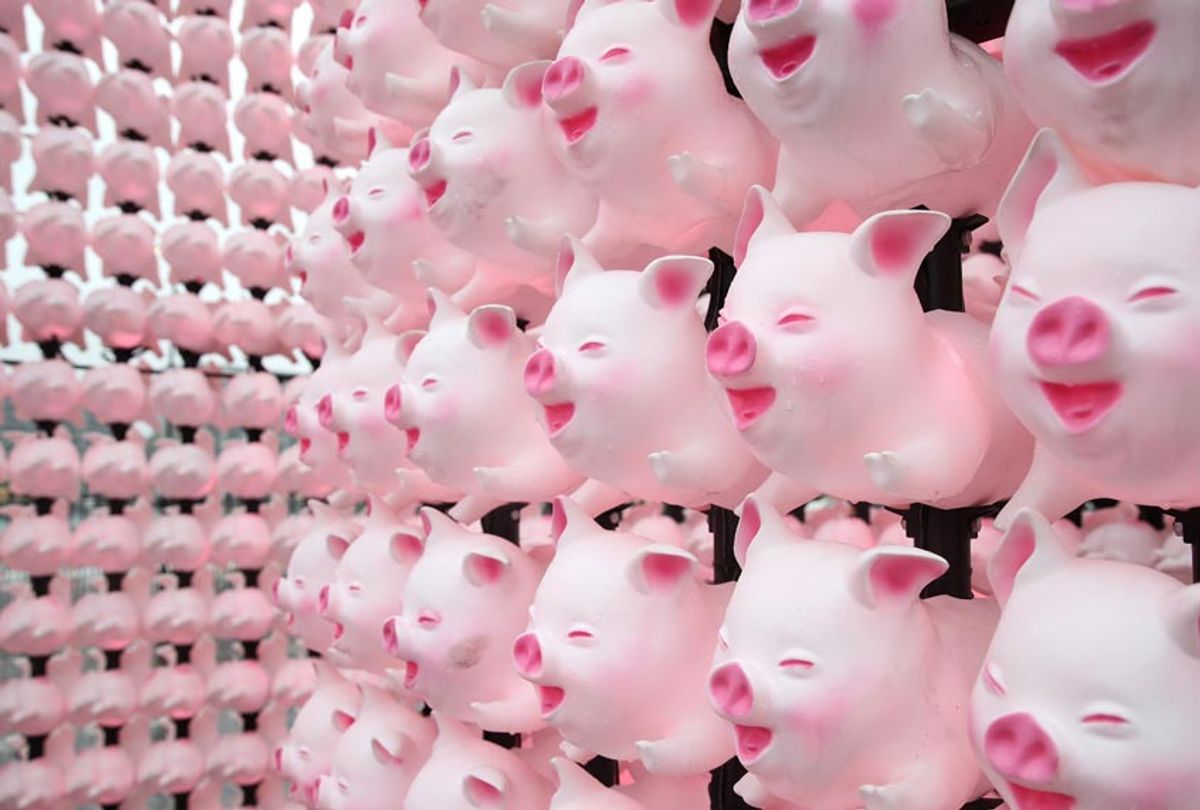 Detail of the 'Spiral Pig' zodiac lantern by artist John Deng on February 01, 2019 in Sydney, Australia. Sydney Lunar Festival has evolved from a small community celebration in Chinatown 23 years ago and now attracts more than 1.3 million visitors from all over the world each year. (Getty/Cameron Spencer)
--

Chinese New Year is upon us, and I'm almost ready. That is, if one can prepare for several days of non-stop eating and visiting relatives. This year's Lunar New Year falls on February 5, which is uncomfortably close to the excesses of Christmas and New Year's, when I told myself sternly that I must stop drinking bubble tea and do more push-ups.

"You could just do things in moderation," my husband pointed out mildly. Clearly, he had no idea of the true crazy scope of this festival. The lunar new year is the most important event in the Chinese calendar. All over the world, millions of Chinese close businesses that are never shut on any other day of the year and empty out cities in order to rush home. In China, there are massive traffic jams sparked by the new year's rush, when hordes of people pack themselves into flights, buses, and trains. In Singapore and Malaysia, where there's a large overseas Chinese population, people have been known to set off at 3am in the morning in order to avoid the crazy lines at the causeway.

All of this trekking is to get home for the big reunion dinner on New Year's Eve, when family members unite to set off firecrackers, play mahjong all night, and eat. And eat. Food and love and filial piety combine to reach dizzy heights of guilt and delight, together with once-yearly treats like pineapple tarts, nian gao, and red packets crinkling with the promise of pocket money.

As children, our main roles appeared to be to consume the food that appeared, like magic, at all hours of the day. "Have you eaten?" was the constant outcry from the adults. Treats were stuffed in hands, laden on plates, and tucked into pockets. For my grandparents, who had survived WW2 and the Japanese occupation of Malaya, nothing gave more joy than the sight of a well-fed child. There were no dietary rules in their house—only large tins filled with homemade biscuits.

My grandparents lived in a long narrow Chinese shophouse on the main street of a little town in Malaysia. Going back was a must, never mind that our car, windows rolled down in the sweltering tropical heat to prevent overheating, inched forward on jam-packed roads. Part way there, we'd make a stop at Bidor, a small town known principally as a purveyor of delicious duck noodles. Around new year's, the open fronted food stalls would be festooned with lime green globes of giant pomelos. Each steaming bowl of dark aromatic broth came with a meltingly tender piece of duck pillowed on springy noodles.

When we finally pushed back the metal grill door of my grandparents' shophouse, we were hot, tired, and bearing gifts (food of course). Heong beng, the flaky biscuits made with lard and filled with caramelized sugar, pork floss, and other delicacies my mum had stuffed into bulging shopping bags. Not to be outdone, my grandmother would amass crispy fried keropok, prawn crackers, and other traditional sweets like the delicate curled biscuits called love letters, in ancient Jacob's Cream Cracker tins. Just in case anyone had fainted from hunger on the way.

Lined up on the cool cement floor of the courtyard was a queue of fat nian gao or new year's cakes. Made of glutinous rice and sugar, this sticky paste was ladled into banana leaf wrappings, steamed to a rich caramelized brown, and then left to dry in the sun until it hardened. On New Year's day, my mum would slice the nian gao into half inch thick slices, dip each into beaten egg, and fry them till they were crisp on the outside and satisfyingly gooey on the inside. Traditionally, a little bit of sticky-sweet nian gao would be smeared on the picture of the kitchen god so that he would have nothing but sweet things to report when his picture was burned to send him back to Heaven.

Before the family reunion dinner could be eaten, the gods must be served first. My grandmother followed her own particular mixture of Buddhist and folk beliefs: no washing your hair on New Year's day, or sweeping the floor or throwing the garbage, since that was equivalent to bad luck. Neither was complaining or saying unlucky phrases. The food for the gods had to be prepared just so: a whole steamed chicken that my grandmother had reared in the back kitchen courtyard, dishes of meat and a fresh green lettuce (sang choy, a homophone for fortune) were put on a tray with chopsticks and bowl and offered at the altar. No one was to touch them before the gods had partaken. Even the prayer had an order. First she prayed to the god of Heaven, next the god of Earth, then for the ancestors, and the kitchen god. Finally, there was a prayer to the small god in the bedroom who kept the children safe, known as the godmother of children.

Once the food had been ritually offered and accepted, it was consumed by the family. The whole steamed chicken, rubbed with fragrant sesame oil, was expertly chopped into bite size pieces and served with a dipping sauce of ginger, soy sauce, shallot oil, and green onions. Accompanying it were stir-fried greens with garlic, succulent pork belly slow cooked with fermented bean paste and wine, and noodles for long life. Every family cooked its favourite dishes for the new year. Some made dumplings and wontons shaped like fat purses of gold, others steamed a whole fish in a gloss of shallot oil and soy sauce. For dessert, we nibbled on juicy peeled segments of pomelo and ate tang yuen, mochi dumplings served in a sweet soup. Whatever stomach space was left was devoted to an unending parade of toasted watermelon seeds, crystallized sugary pieces of winter melon, and peanuts.

Now that I'm middle-aged, all this feasting which traditionally continued for the fifteen days of lunar new year seems a bit daunting. Not least because I'm no longer able to digest vast amounts of carbohydrates, but also because I live a continent away from my extended family, who would noisily cook and partake of these new year excesses. Every year, I think my kids are missing out by not being forced to stand over a hot wok, laboriously caramelizing pineapple jam. The freshly made jam, redolent with cloves and sugar, was used to fill divinely buttery, golden pineapple tarts. Maybe this year, even if we can't manage the rest of the menu, we'll actually make them.

Yangsze Choo, a fourth-generation Malaysian of Chinese descent who grew up in Malaysia, is the author of "The Night Tiger." After receiving her undergraduate degree from Harvard, she worked as a management consultant before writing her first novel, the New York Times bestseller "The Ghost Bride." She lives in California with her family and several chickens and loves to eat and read (often at the same time).