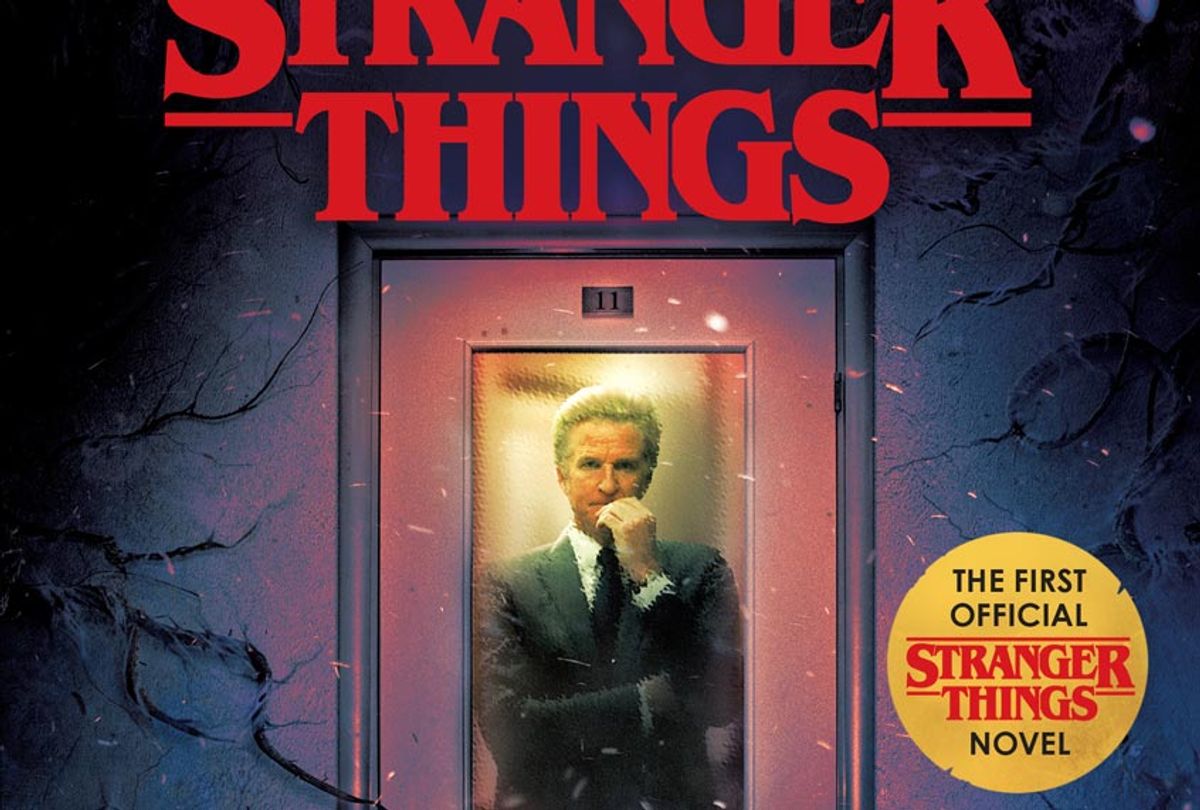 The Duffer Brothers made their big move toward expanding the "Stranger Things" universe beyond Hawkins in "The Lost Sister" episode of season 2, a standalone episode that proved divisive among the Netflix series' fans and critics (Vulture called it "the worst episode" — ouch). In it we see Eleven reunited in Chicago with an older girl named Kali — or subject 008 — a fellow subject of Dr. Brenner's who survived her tenure in Hawkins National Laboratory with both special powers and rage intact. Kali shares a bond with the character that season 2 confirms is Eleven's mother, Terry Ives, the woman with the fried brain and dark connection to Hawkins that Joyce and Sheriff Hopper meet in season 1.

Now the relationship between Kali and Terry has been built into a bittersweet bond by Young Adult novelist Gwenda Bond, author of "Suspicious Minds," the first official novel in the "Stranger Things" universe. While a student at nearby Indiana University in Bloomington, as the Vietnam War has campuses across the country in unrest, orphaned Terry Ives takes her roommate's place in a mysterious medical experiment led by Dr. Brenner. She and three others who show "promise" are transported back and forth to Hawkins, where Brenner leads an arm of the now-notorious Project MK-Ultra, the CIA-funded human experiments with psychedelic drugs on mind control  and intelligence gathering. There, of course, weird and sinister phenomena begin to occur, and Terry and her newfound "fellowship" of lab rats start to suspect that the science at work is less than aboveboard.

Bond is the author of numerous YA novels, including three Lois Lane novels and the Cirque American series, and, with her husband Christopher Rowe, the middle grade series "The Supernormal Sleuthing Service." (She's also an occasional Salon contributor.) We spoke this week about writing within the "Stranger Things" universe, drawing on personal history to recreate the time period and how the tight friend group in "Suspicious Minds" came to life.

The “bottle episode” of Stranger Things season 2 was controversial among fans — a lot of viewers hated it. (For the record, not me.) Did the fan reception of that episode, which connects so strongly to this book, affect you while you were writing?

Oh, yes, the controversial “bottle episode.” I wasn’t in the hater camp either, and I liked the character of Kali and her connection to Eleven. When I started sketching out ideas for the book, I knew I wanted to show Dr. Brenner with another young test subject. I suggested that I use Kali and crossed my fingers and was thrilled when everyone was on board with that.

I’d say the fan reaction did affect me, in the sense that I wanted to bring people who didn’t care for that character around by showing more of her backstory. Young Kali’s fierce longing for friends, her capacity for loyalty even in the hands of a monster like Brenner, seemed like it would be there, even in childhood.

Like your Lois Lane books, "Suspicious Minds" works within a pre-existing fictional universe, and as a prequel to the "Stranger Things" TV show it also has a certain frame it has to work within. And yet to this reader it’s also undeniably a Gwenda Bond book. Can you talk about how you achieve that balance? And can you reveal how much of the story was already established by the larger "Stranger Things" project when you started writing?

I’m so glad you feel that way. My goal when I’m working in someone else’s universe is always two-fold. One, I want the story to be something that feels right to the fans and, two, I want to bring myself and my voice to it because I assume that’s why I’ve been asked to write it. This is one reason I’m careful about not taking on stories where that approach wouldn’t work. I have to be just as invested in it as I would be in anything I write or I can’t do it.

But I’ve also been extremely fortunate to work with editors and creators, on Lois Lane and now "Stranger Things," who wanted me to have that freedom. When my editor approached me about doing the first "Stranger Things" novel, there was a broad stroke idea of what it would be — a prequel about Terry’s time in MKUltra with Dr. Brenner, a period piece for the late ‘60s/early ‘70s in a way similar to the show and the ‘80s. She promised there’d be room for me to build out that corner of the universe and make it my own, and that was absolutely true. We were all very much on the same page.

Obviously the framework is there in terms of what we all know from the show, but I even had freedom in terms of revealing Eleven’s biological father. I should say we had a great consultant from Netflix who’s a staff writer on the show, Paul Dichter, who we worked closely with throughout the editorial process. There are many things about the "Stranger Things" universe that no one knows besides the Duffers, and so that was essential to make sure the novel fully meshed with it.

"Suspicious Minds" also features a group of young people who band together to take on the malevolent forces in Hawkins National Laboratory, but in this is a story centered around young women, with the men taking on roles that are more supportive. Did the characters of Alice and Gloria and Ken exist in the "Stranger Things" universe before you got there? Was the story of Eleven’s mother always meant to be a more female-centered one than the show?

The only preexisting characters in the book are Terry, her sister Becky, Dr. Brenner, and Kali/008. Everyone else I created. It was vitally important to me that there be a strong friend group as part of the story, and it just made sense that it would be the other people in the experiment.

There’s the photo we see briefly in season one that suggested the gender make-up of the experiment, but . . . honestly, I just wanted to give Terry a sort of girl gang and write good guys in her life. That felt like something in keeping with the show, but also that would work uniquely well with this book being Terry’s story.

And so Alice, Gloria, and Ken were born. They became some of my favorite characters I’ve created. I miss writing them.

Along with the monstrous work of Papa/Dr. Brenner and the Hawkins Lab, the Vietnam War and Richard Nixon are huge overarching menaces in the lives of Terry and her friends. But so are the very human ingrained bigotries and social constraints of the time. We think of that period now — 1969-'70 — as a time of freedom for young people, but "Suspicious Minds" also explores how that freedom depended largely on being a white man from an affluent, even well-connected, family. Was that a goal from the start, or did the political themes emerge as you worked? Were there things you wanted the characters to be able to do that the time period precluded?

Excellent question. My editor and I both saw that incredibly rich political time of 1969-70 as an opportunity and one that resonates with our current climate. And, of course, MKUltra itself was tied to the idea of national security. Given that Terry is in college and the group around her is the same age, the Vietnam War would’ve felt odd to not use and I didn’t want it to feel like wallpaper. It’s too important for that.

As a woman whose mother was more or less Terry’s age in the late ‘60s, I did want to take the opportunity of having several characters — especially female characters — from different socioeconomic and racial backgrounds and explore elements of their daily life at the time. Not in a heavy-handed way, hopefully, but in a matter-of-fact one. There’s a moment where Terry has easy access to her money because she doesn’t have a bank account, as a single woman. That comes straight from my mom’s being turned down for an account as an adult woman without a male co-signer.

So, yes, while there were a lot of new freedoms, there were also many remaining constraints. Not just for women. We all know how much easier it was for the well-off to escape military service, and that the new freedoms weren’t distributed evenly.

Fans of the show’s use of period pop culture references will appreciate how Tolkien’s "Fellowship of the Ring" functions in this book. It’s one thing to pick up on the elements of period pop culture we might have personal nostalgia for, but this book is set before you were born. Obviously research into things like the MK-Ultra program is necessary for a book like this, but what other kinds of cultural research did you do to get the time period and university/youth culture just right?

I did so much research, while also writing the book on a fairly tight deadline. The Lord of the Rings became a legitimate phenomenon among college kids during this time, and so that one just fit. One thing I did was go back and reread early Stephen King books and contemporary novels from that time to get a sense of language and clothing. I didn’t want everyone to be going around Indiana saying “Far out” all the time.

I also read and watched a lot of documentaries. I googled everything. God bless everyone out there dedicated to maintaining a photographic pop culture library of candy and toys and cars and what Halloween costumes were popular when. I made a period playlist. And I did research not just on the war and larger politics, but on things like Bloomington and its neighborhoods and civil rights history.

Also, like so many of us, I was a complete ‘60s nerd as a teen. It’s still one of the most formative periods for youth culture, no matter how much we might want to deny it. So I think spending the section of my golden age "Stranger Things" childhood between the ages of 14 and 16 pretending I was from the '60s instead helped.

Are you working on any other "Stranger Things" properties at the moment? (Is this information classified?)

Not at the moment, but who knows what stranger things might happen?