AIDS icon Eric Sawyer: Why Trump's pledge to end the HIV epidemic is yet another empty promise

Trump's plan is best described as a PR stunt: It was orchestrated to impress cable news pundits and Twitter users 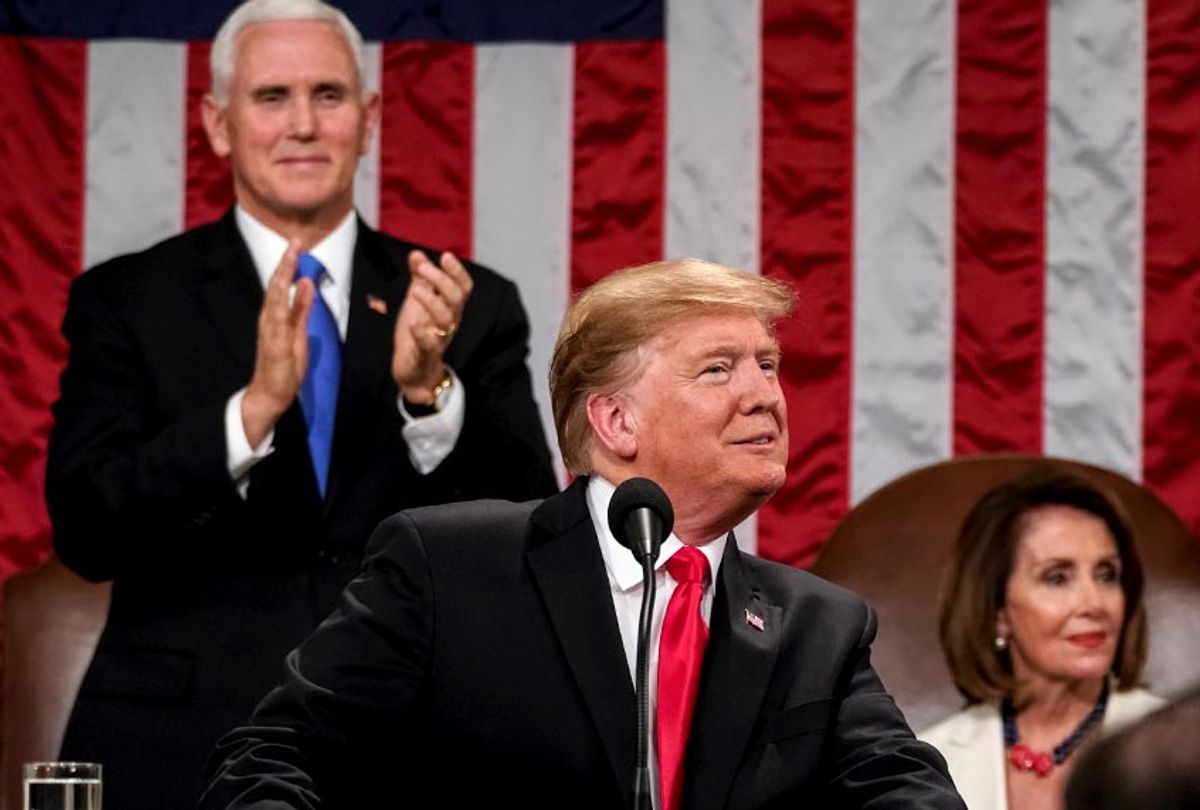 President Donald Trump, with Speaker Nancy Pelosi and Vice President Mike Pence looking on, delivers the State of the Union address in the chamber of the U.S. House of Representatives at the U.S. Capitol Building on February 5, 2019 in Washington, DC. (Getty/Dough Mills)
--

At first glance, President Donald Trump's vow in his annual State of the State Address to end the plague of AIDS in the U.S. by 2030 seems like a positive step, especially given that a coalition of AIDS organization wrote to all presidential candidates prior to the 2016 election asking for meetings with candidates to discuss making a pledge to develop plans to "End AIDS" by 2025.

At the time, all three of the Democratic candidates, including former Maryland Gov. Martin O'Malley, committed to doing so; the eventual Democratic nominee Hillary Clinton and Sen. Bernie Sanders both met with a contingent of members of the HIV/AIDS community to discuss the development of such a plan. However, not a single candidate from the Republican Party, Trump included, responded to multiple requests for meetings with community leaders.

This fact makes it hard to trust that Trump out-of-nowhere pledge is more than just a PR stunt deployed to garner positive reviews of his State of the State address from cable news pundits and Twitter users.

It also appears to be a transparent attempt to follow the lead of other presidents who have named significant health initiatives during the State of the State Address, including former President Barack Obama, his predecessor in the White House, who vowed to cure cancer "once and for all" in a "moon shot" inspired by his Vice President Joe Biden.

In this case, Trump directly mirrors the surprise announcement of the hugely successful PEPFAR Global AIDS Program by former President George W. Bush during his first term. (PEPFAR is credited with saving the lives of over 17 million people living with HIV infection, largely because it committed several billions of dollars annually to support the local communities and national governments of countries most burdened by HIV/AIDS.)

However, a simple review of the short history of the Trump administration shows a total lack of concern for people living with and impacted by HIV/AIDS and for the communities most at risk for contracting the virus that transmits it – namely people of color, gay men, and the transgender population. Not to mention, the administration has shown a hostile disregard for an effective response to a plague that approaches its fourth decade.

You may recall that, on the very day of the Trump inauguration, the White House website was stripped of any reference to the National Office of AIDS Policy and previously-developed National AIDS Plan. The website was also sanitized of any reference to Obama-developed policies and protections for the rights of people who identify as LGBTQ.  In very short order all of the members of the President’s Advisory Council on AIDS were fired by letters sent to their homes via Fed-Ex. To this very day, the president has failed to appoint a new coordinator of the National Office of AIDS Policy or to reconstitute that office, which has the primary responsibility of directing the national response to HIV/AIDS.

The list of direct assaults on people living with HIV/AIDS by the Trump administration include recently deeming some HIV-positive individuals as unfit to serve in the military, falsely claiming that their status renders them unable to effectively be deployed for combat. The Trump administration has therefore subjected them to immediate discharge. This policy runs parallel to Trump's equally immoral transgender service ban.

Another egregious action that shows a disregard for the HIV/AIDS community is the fact that the Department of Health and Human Services reallocated Ryan White Care Act funds away from their intended purpose to provide life-saving services to fund the Trump administration's controversial child separation program at the southern border with Mexico. The president has repeatedly demanded that Congress provide him with the astronomical $5.7 billion he claims is necessary to erect his campaign promise of a border wall. Last night's announcement did not include a similar request for funding from federal legislators.

The Trump administration has also established a religious liberties task force within the Department of Justice to defend individuals who, because of their deeply-held religious beliefs, object to the delivery of healthcare and other services to members of the LGBTQ community. Here's why this initiative has Vice President Mike Pence’s fingerprints all over it. His public distain for LGBTQ people was first on display in Indiana, where his actions as governor resulted in real life consequences, including death. During his time as state executive, Pence was warned about an HIV outbreak in a small group of drug users in Scott County. Pence delayed the recommended roll out of a needle exchange based response, saying he had to “pray on” the morality of the distribution of clean needles to drugs users. A resulting "215 injection-drug-related HIV infections could have been averted from a swifter response," according to POZ magazine. And here's the kicker: It took less than 24 hours after the delivery of the State of the Union for Trump's Justice Department to block the establishment of supervised injection sites.

And these examples barely scratch the surface of the Trump administration's hostile actions that undermine our national response to HIV/AIDS. Let's be clear: HIV is primarily an epidemic of poverty that impacts the most-vulnerable populations in our society. These are the very people who are the most likely to lack access to healthcare. These are the very people for whom the Affordable Care Act was established in order to provide access to healthcare. The direct assault on Obamacare by the Trump administration and Republicans in Congress stands in direct opposition to any glimmer of concern for the health of individuals impacted by or at risk of contracting HIV. All of these factors makes an announcement to end HIV by 2030 in the U.S. suspect at best. This is also a president who used an argument about "both sides" in the wake of the racially-motivated events in Charlottesville to sympathize with neo-Nazis and white supremacists.

However, there is a path forward if the administration actually steps up. Members of the "Act Now End AIDS" coalition and others within vulnerable communities have developed a community plan titled “‘Ending the HIV epidemic in the US: a roadmap for federal action,” which asserts that dramatically scaling up HIV testing and treatment, as well as universal access to prep by 2025 would avert approximately 353,000 new HIV infections between 2019 and 2030, saving the U.S. health care systems billions of dollars.

This community plan stresses that increased access to healthcare, Medicaid expansion in all 50 states; recommitting to protecting the human rights of vulnerable people, which is crucial to ensuring universal access to healthcare; and focusing on the delivery of HIV treatments, care and support, including stable housing and food security, to those most vulnerable to HIV infection is the key to any plan that truly attempts to once and for all end the HIV/AIDS epidemic in the U.S.

This translates to focusing delivery of HIV services to gay and bi-sexual men, transgendered people, people who use drugs, sex workers and individuals in non-monogamous sexual relationships and people who have sex with these individuals.  An effective program targeting these vulnerable populations cannot be hamper by religious judgments that deny people the crucial services needed to protect individual and public health. Any thing less would fail to meet Trump's lofty goal.