Bow down to "the Tinder Queen": Dating apps aren't just for hooking up 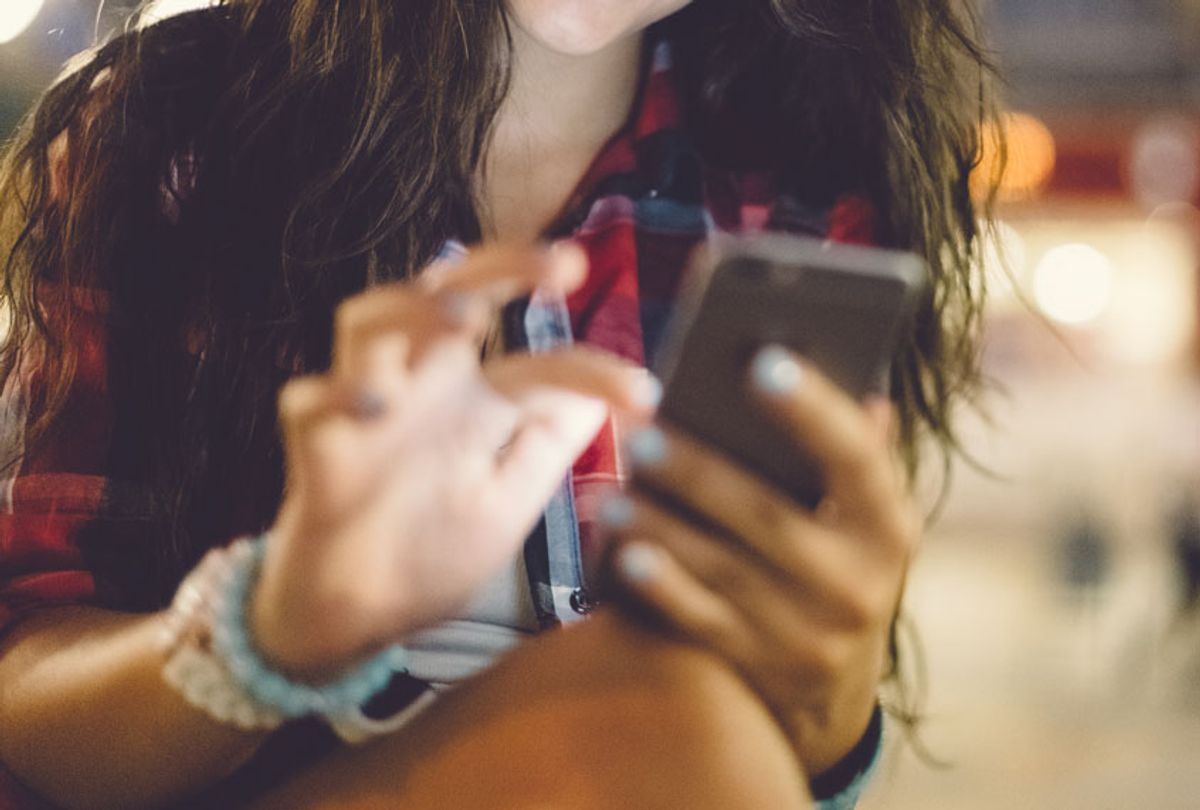 Excerpted from "Left to Our Own Devices" by Margaret E. Morris (MIT Press, 2018). Reprinted with permission from MIT Press.

This is the season for dating apps. They've become the default way to meet romantic partners, and relationships that start online are more likely to stick than those that start elsewhere. As Valentines approaches and the pressure to feel paired increases, some will doubtlessly combine strategies: using Facebook and other social media to assess the relationship status of candidates they then hunt down on Bumble. Apps like Bumble, Tinder and OkCupid may be popular for other reasons too. In my new book, "Left to Our Own Devices" (MIT Press), I describe  how individuals use them to sort through self-presentation, to meet people while traveling, and as a form of medicine to bounce back from the pain of break ups.

* * *
Tinder is often presented in the media as a wildly popular tool for sexual encounters with no strings attached. Its matching—based solely on mutual physical attraction and location—almost mocks the compatibility algorithms of legacy online dating tools, such as Match.com and eHarmony. Headlines such as “How Tinder Took Me from Serial Monogamy to Casual Sex” were common, particularly in its early years.

The actual use of Tinder and its gay equivalent, Grindr, is far more textured than this portrayal. Since Tinder’s release on college campuses, it has been taken up not just for convenient casual encounters but also for establishing ongoing relationships and meeting friends.

For the people you will meet in this chapter, hooking up was beside the point. They used Tinder and other hookup apps (sometimes in conjunction with social media) to explore their sense of self and place in various social worlds. Even the cases where apps helped them locate a romantic partner, their motivations were never that simple.

Bouncing Back from a Breakup

Caroline, a twenty-two-year-old female college student, felt broken when her boyfriend of four years broke up with her. This came within months of emotionally significant milestones, such as introducing him to her father, whom she rarely sees, and exposing him to conflicts within her family. She thought that this sharing reflected the strength of their relationship but afterward saw that it did not carry the same meaning for him. For months after the breakup, she struggled. Her friends sometimes found her crying in the back staircase of her sorority house.

Unlike her family troubles, which she kept hidden from most of her friends, this breakup pain was something she shared. A friend, who had witnessed the suffering and listened to Caroline talk about her pain at length, was unsure how to help. More empathetic discussions didn’t seem like the answer. So during one of these laments, she grabbed Caroline’s phone and downloaded Tinder. She browsed Tinder frequently even though she was in a committed relationship and was optimistic about how it might help Caroline.

That wasn’t the commiseration that Caroline was expecting, but it worked. Excitement overtook her despair as she browsed matches. She described then charge: “When in real life would I get ten messages saying, ‘That guy who you thought was cute, well he thinks you’re cute too’?!!” She used the app as a form of social buffering. It ameliorated the pain of being dumped and created an opening for excitement.

She used the app in some slightly uncustomary ways. Tinder promotes its link with Facebook, in part to provide assurance about the identity of other people on the app and in part to pair up with people within their social networks. An identity is less likely to be fabricated on Tinder than on other dating sites (although some do create alternative Facebook accounts to disguise themselves on Tinder). To some, hooking up with mutual friends seems appealing and less dangerous than meeting strangers, but not to Caroline. She avoided any matches with mutual friends. Most of all, she didn’t want her sorority sisters involved in this aspect of her healing.

While many people take advantage of Tinder’s geolocation features to find potential matches nearby, Caroline set wide location parameters purposefully to avoid meeting anyone from campus or university circles. She focused on low-income suburbs a good distance from school. Doing so was also a way to visibly reject her family and the high value that they, especially her mother, put on wealth as a criterion for selecting a husband. Tinder became a weapon in Caroline’s continuing struggle with her family as well as a way to heal emotionally—psychological uses that may not immediately come to mind when one thinks of Tinder.

Camilla proclaimed herself a “Tinder Queen.” She hadn’t always felt respected on dates she met offline, but on Tinder she feels in control. She works at creating a glamorous persona and regularly curates the Facebook photos and interests that show up on her Tinder profile. She wants to meet people, or at least accrue matches, wherever she is, so when she travels, she modifies her profile to express what she thinks will be appealing in that context. For example, she shows more playful images when on spring break than when she’s interning (e.g., sporting a tank top and sunglasses at an outdoor bar as opposed to being suited up in an office). She treats her profile picture as if it were a status update, adapting it to her goals for a particular situation. She noted, confidently, that she tailors her messages to the people who write her. She uses language from their messages and profiles, understanding that this kind of mirroring can make one more likable. This could backfire, though; mirroring is effective only if it is not obvious to the recipient, and some of her mirroring, such as throwing in expressions from the other person’s native language, is likely to be noticed.

Some viewers might be struck by the disjointedness of Camilla’s self-presentation over time. A match from her home city might be put off by how she has changed her profile during a trip. She has had these kinds of complaints, but they’ve seemed laughably provincial to her. Creating a continuous persona is less important to her than cultivating new matches. She sought evidence of her desirability.

As my colleague and I sat with her, she mocked some of the overly earnest responses that she’s received, and, swiping through images, commented, “These aren’t real people.” It seemed as if Tinder was a fantasy game where matches were points and confidence was the goal. She recounted a time when she sat around playing on Tinder with a couple of her friends. “It was like we were the three most beautiful women in the world.”

Camilla demonstrates a fair amount of self-awareness and social skill. She recognizes that her own goals and those of others vary depending on context. She tailors her profile to what she wants at a given moment, and mirrors tone and language to gain acceptance—a practice that has been shown to build rapport in many situations, from dating to salary negotiations.

Camilla’s strategy is complicated. She exerts effort and skill to elicit the interest of people who she, for the most part, doesn’t find interesting. Some may see this as a defense against disappointment or suggest that she focus more on quality rather than quantity of matches. But the evidence of her broad appeal, wherever she is at that moment, is clearly important to her. This evidence may be all she is seeking from Tinder.

Moving beyond the hookup, dating apps are being adapted for emotional first-aid, social support, and self-exploration.

Margaret E. Morris is the author of "Left to Our Own Devices: Outsmarting Smart Technology to Reclaim Our Relationships, Health, and Focus." A clinical psychologist, researcher, and creator of technologies to support well-being, Morris was a Senior Research Scientist at Intel from 2002 to 2016. She has conducted User Experience research at Amazon and is an affiliate faculty member in the Department of Human-Centered Design and Engineering at the University of Washington.