Train wreck: Healing for two and parenting with PTSD 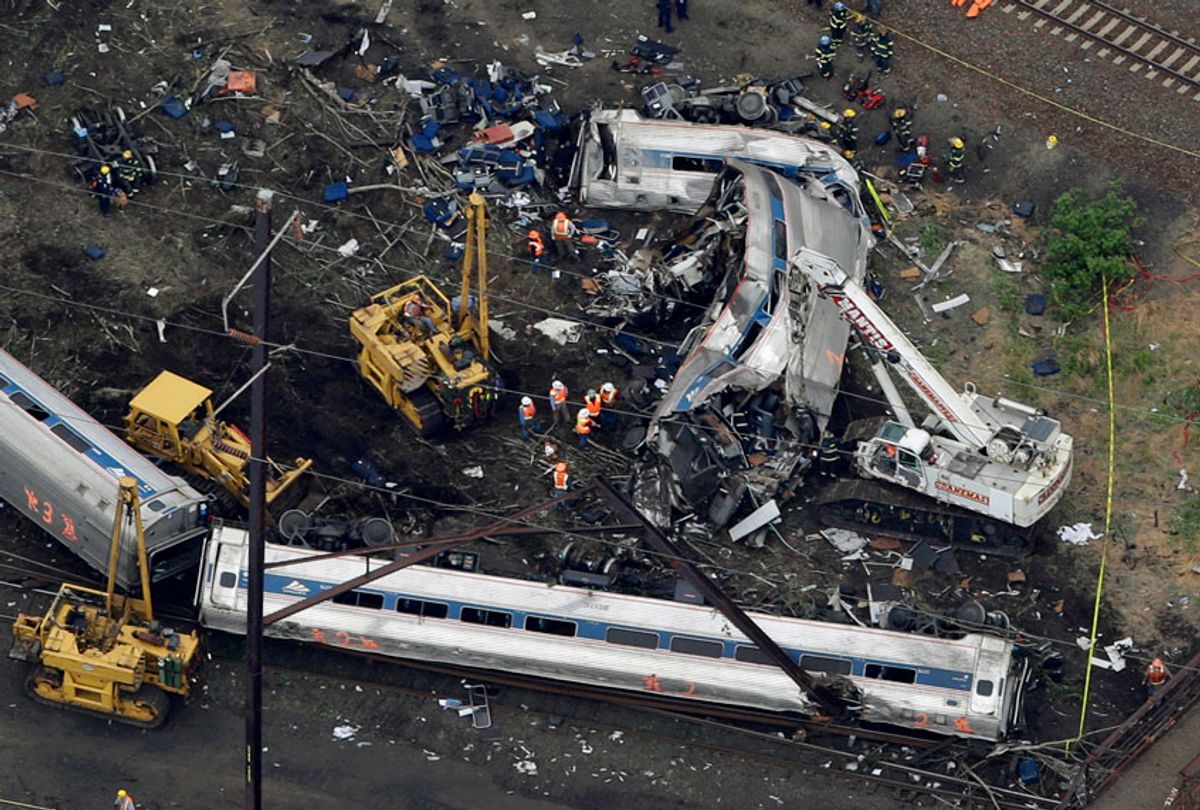 emergency personnel work at the scene of a deadly train derailment in Philadelphia, May 13, 2015. (AP/Patrick Semansky)
--

PTSD. Mild as far as these things go. Just a nanosecond flash of adrenaline when the subway jerks to one side or the other.

Whoa, big turn, I thought to myself, returning to the peanut M&Ms I’d just purchased in the Amtrak snack car. Then I pitched forward out of my seat, hands over my head, bracing. On that night in May of 2015, I would soon learn that my train had derailed at 102 miles an hour on a 50 mph curve on the outskirts of Philadelphia.

But not today. Today it’s just the jostling of the A train under the river, or the tilt of the F as it makes its way over the rickety-looking overpass above Gowanus, Brooklyn. I take a deep breath, and the terror and dread dissipate into vague worry. A touch of melancholy and frustration. It’s nothing. It’s already gone. I’m sick of it though. Therapy. Meditation. Journaling.

I was a caretaker. I was OK and others weren’t. I was in crisis mode. I was on my own. I was the only person who seemed to be moving around. Moving through the surreal landscape of upside-down chairs and luggage racks, tattered upholstery, grit, loose strands of emergency lights shining impotently in the darkness. Moving to a woman, a doctor, who matter-of-factly self-diagnosed her broken leg. “I’ll need a pin,” she said. But having determined her condition so efficiently, she just groaned and groaned in agony. I placed my hand on her back. Then I worried I was intruding and pulled my hand away. To the man who needed a cell phone. To the woman half-crushed by the row of seats: “I can’t breathe, I can’t breathe!” But she could, just enough. Just enough, I told myself, because she kept saying it and there was nothing I could do.

Adrenaline pumping, I was vaguely aware of a broken hand and a tender lump on my head. I was oblivious to my broken ribs. I didn’t even feel them until I tried to take off my shirt in the hospital, surprised by a stabbing pain as I raised my arms over my head. “Looks like you cracked a couple of ribs,” said the ER doctor casually. Huh. Three hours earlier I’d attempted (quite unsuccessfully) to lift a row of seats off of the woman struggling to breathe.

There was a woman toward the front who called 911. She was 13 weeks pregnant. “Don’t touch the wires,” she relayed. When the light of her cellphone went out, she was lost to me. My world extended just a few feet in either direction. “I can’t breathe!” cried the woman. “I just need to get up!” cried the man. But every time we tried, he gasped in pain. A few feet farther back I found an angle to rest on and waited.

There was a screeching, grinding sound of metal. A saw? They’re here. A voice came through an opening toward the back.

“Count off so we know how many people are here.”

“Twelve,” I said, and the count died out with me.

“Wait, there are more people here!” I shouted. It was a different world up there. Didn’t they see the rest of us just 20 feet farther up? The people trapped on top of each other. The woman underneath the seats.

“Is there anyone unconscious?” asked the voice.

“No,” came the too rapid response.

“We don’t know that!” I shouted, but somehow my voice was lost amidst the smoke and stray seat cushions. And the electrical pole I learned later had sliced through our car, which explained a lot.

“Everyone who can walk, out of this car now!”

My exit was blocked by a man I hadn’t seen before. His entire body was splattered with blood and all his energy seemed focused on his rapid breathing. Stupidly, I asked if he was OK.

Was it sarcasm I heard in his whimpered response?

I stepped over his body.

Up through the window and there I was, on top of a train car wondering what to do next. I saw a long ladder stretching to the ground, and just like that, I was out. And the people trapped inside were still trapped. I looked back at the wreckage. The train cars looked so much bigger on their sides, strewn diagonally across the tracks. The inconceivable was real, incontrovertible.

And then I was on my own in the hospital with this incredible and insane news. I was pregnant, too. I’d suspected I was. I’d run down my phone battery on the train trying to figure out if it was too early to take a pregnancy test. I told the triage staff I couldn’t have x-rays and they told me to go pee in a cup. My hands were so swollen I couldn’t unbuckle my belt. I had to peer out of the bathroom to find a nurse to help me. I hate asking for help.

“Yes!” “Now I see two lines! There are no false positives!”

Despite her seeming inability to read a pregnancy test, I trusted the nurse’s advice and kept the news to myself until my wife arrived at the hospital. I’d thought it would be amusing to text, “Turns out I broke a couple of ribs and I’m pregnant!”

But the nurse said, “Honey, don’t text her while she’s on the road! You don’t want her to get in a wreck!” That’s for fucking sure, I thought. “You want to see her face when you tell her, right?” So I waited. I waited the three hours it took for Sarah to borrow a car, pick up a friend for moral support, drive to Philadelphia and somehow figure out where I was.

It was up to me alone to digest the joy and the tragedy. The groans of the passengers, the blood, the panic. The lives that had surely been lost. And the millimeter-long cluster of cells nestled inside me, the new life I’d been waiting for. If I didn’t miscarry. The doctor conceded miscarriage was perhaps more likely than usual, so I waited. I waited for it, but there was no trickle of blood and no rush of it. No cramping. The heartbeat was strong every time. No reason for concern. No reasonable reason to worry about this life born into my consciousness on that terrible night.

The calendar of my pregnancy, counted carefully week by week, also tracked the calendar of my recovery, measuring the distance between myself and the crash. The line between recovery and pregnancy was frustratingly blurred. Nauseous, fatigued. Injured or pregnant? The midwife said my shortness of breath was caused by the broken ribs; the orthopedist said it was the pregnancy. I think I remember the day the nausea from my concussion faded and morning sickness took over. At first I lacked any interest in food, and then suddenly my nausea came with a desperate, take-no-prisoners hunger.

And two years later, my daughter sleeps in the room next to mine as I write it all down. I breathe through the grief, through the subway jolts, the concussion, the massive bruises. The eight lives lost.

I was a caretaker. I was OK and others weren’t. I tried to lift those seats off of her again and again. I helped him sit up until the pain forced him down again and again. I found a cell phone. I returned it to its owner. I placed my hand on her back. I told him I was sorry. I’m out of the train. I’m in the streets of North Philly surveying the chaos. The stretchers, the crowds. Neighbors offering water bottles and cell phones.

My hand. It’s probably broken. But maybe I can just take a bus back to New York and deal with it there. There’s Tom. Tom from the conference! He was in another car. He’s ok. Wow, that’s a big lump on my head — maybe I should go to the hospital tonight.

I groan in frustration. She’s only napped for 30 minutes. I was counting on an hour and a half. She’ll be cranky. I pull myself back to the present moment, tedious but immediate. I’m alone again with my story. I empty myself of it. When can I ever tell her about this?

It wasn’t until she was born that I learned I had more healing to do. Until I held her in my arms, I thought I’d weathered the crash intact, if not in body then in spirit. Built like a waif and not so tough on the inside either, it turned out.

Every new parent has a few irrational fears, but I was constantly flooded with spontaneous images of collapsed awnings, toppled dressers, even cabinets pulled loose from the wall, crushing my six-pound baby. I couldn’t pass those fears on to her, so I breathed through it. Talked through it. Wrote through it. Let it float away, light as a feather on some days. But today it’s heavy. And she’s still crying.

There she is in her crib — her warm little body, her sleepy eyes, her tired cries. She doesn’t want to be awake either. Defying the sleep experts and “self-soothing” advocates, I take her in my lap and nurse her back to sleep. We rock together in the blue afternoon light. A caretaker, yes, my nipple still in her insistent mouth. But I too seek what I need in the quiet afternoon. I close my eyes. I venture back. I feel the grief. My clenched jaw, my practical matter-of-factness. What else was there to do? She said she couldn’t breathe. He needed a cell phone. I had to step over him to get out.

I feel her warm body pressed against my belly. This body now external. Substantial. Her little sighs. The occasional flutter of her jaw.

Jessica Baen is a conflict resolution professional in New York City. A former researcher at the Arnold A. Saltzman Institute of War and Peace Studies, Jessica is currently exploring the power of dialogue and storytelling to bridge America's political divides. Her personal essays have been published in Dame Magazine, Gay City News, The Guantanamo Lawyers (NYU Press) and Turning Wheel: The Journal of Socially Engaged Buddhism.