Why the Punisher is more relatable than Superman: "Anger is an easier feeling" 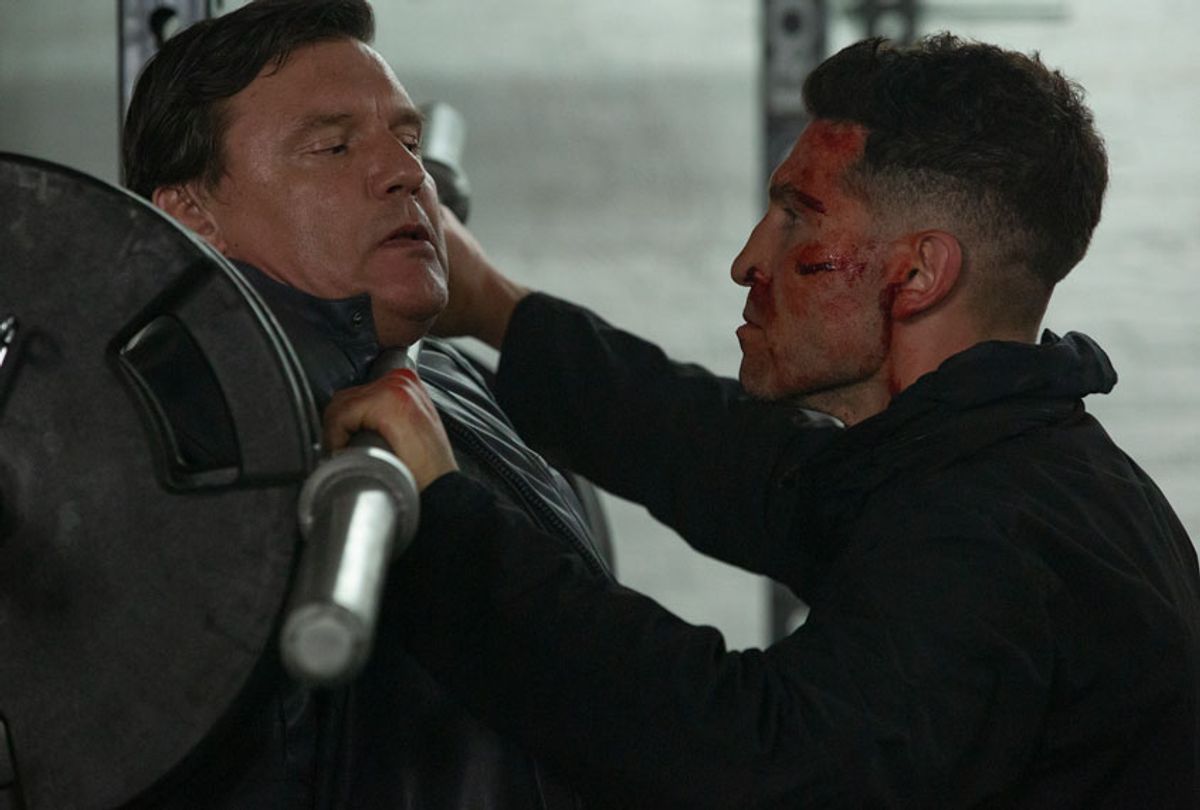 Created by Gerry Conway, the Marvel comic book character the Punisher debuted in 1974 as a throw away guest villain of the week in "The Amazing Spider-Man" #129. The Punisher (whose real name is Frank Castle) was a street vigilante evocative of Charles Bronson in the "Death Wish" movies or Clint Eastwood's "Dirty Harry" series. Contrary to Marvel's initial expectations readers could not get enough of the Punisher. In the almost 40 years since his debut the Punisher has become one of Marvel's most enduring and popular characters appearing in numerous comic book series, several films and now his own series — where he is depicted by Jon Bernthal — on Netflix.

But the Punisher is so much more than a righteous and innocent man who lost his family to the mafia and then decided to use his skills as a former Marine (or FBI agent, depending on a given writer's version of the character) to wage a one-man war on crime. In that simplicity there is complexity: In his heart, Frank Castle "the Punisher" actually wants peace, but he is inexorably compelled towards violence, vengeance and his own version of justice.

What is the role of an antihero such as the Punisher in an American society which is experiencing such very dark and troubling times? And what does this tell us about the cultural power of superheroes and comic books? Do antiheroes provide a type of cultural therapy by providing permission to indulge in our darkest desires and impulses in a society where such behavior is usually forbidden? How does Jon Bernthal channel Frank Castle and what does this reveal about a certain type of masculinity? Are antiheroes more fun to write than heroes?

Given all of your success with TV shows such as "Hannibal" and now the "The Punisher" as well as your other creative work, how do you learn to let go of a project? To accept that it is done and now it will be out in the world and take on a life all its own?

I am always sitting in the final mix of a show doing the sound and I see something in the cut and I think to myself, "Actually I can do that differently.” One of the frustrations and also one of the joys of television is that the schedules are pretty tight. You have to get it done and move on. As Leonardo da Vinci said, “Art is never finished, only abandoned.” But the good part about such a tight TV schedule is that if we were allowed to obsess about tiny things forever it wouldn't get done and that isn't healthy behavior either way.

We are now in a moment where many of us who grew up in the 1970s and 1980s are seeing comic book characters and storylines on the movie and TV screen that most would never have thought would be depicted with such grandeur and scale. How did this happen? As a member of the hip-hop generation who came of age in the 1980s I still can't believe that there is a "Punisher" TV series.

Comic book stories are based on archetypes. These figures have spoken to people since time immemorial. The oft-discussed "hero's journey." Part of this moment and the popularity of comic book characters is that advances in technology allow us to do an amazing job of actually translating what is on the page and putting in on the screen in a faithful and believable way.

I have never been a big fan of superheroes. My entry point into comics was actually antiheroes like the Punisher, Wolverine, Judge Dredd and similar characters. In the popular imagination superheroes such as Superman are basically gods. Not to be too Jungian, but the appeal is almost too universal and easy. It doesn't feel earned. What then is the role of the antihero in this social and political moment?

Antiheroes feel more real, don't they? I’ve never been a big Superman fan. It is probably because he just has too many powers and his biggest dilemma, really, is about hiding his identity. There is much more to the character of course, but that is the central aspect. Whereas I feel what’s interesting about the antihero is that their first battle is against their own nature and own worst instincts.

What does Frank Castle aka the Punisher want? What motivates him? Why is he a compelling character?

I think he wants some peace. He just wants to wake up one day and feel at peace with himself. His internal conflict is that the one place he finds peace is in the middle of a fight.

Often the only difference in Frank and the villains he takes out is that he knows that what he is doing is not right. The criminals that Frank kills do not care about right and wrong.

On the surface "The Punisher" is a very simple story of revenge and vigilantism. But there is so much more complexity and nuance to the character than many people realize.

I always start by trying to find something universal in characters that we can all relate to. Obviously Frank is an ex-Marine with all these amazing combat skills. Most of us don’t have and will never have such abilities. As a writer you have to find aspects that are universal in him. And again this is especially true if you are writing a TV show where you have to fill hours of time and really inhabit the character. Great TV shows always find universality.

Tony Soprano is a mobster who kills people. I don’t know what’s that like, but I do know what it’s like to have a crazy relationship with your mother. That is the universality in that show. Walter White is about thwarted ambition. It’s about if I’d stayed with those guys I could have been a millionaire and now I found a different way to be one. For me Frank is an "alpha male" and that very type of masculinity made me very interested in him as a character.

The violence, the anger and all those dark emotions which are part of our true nature, does not fit with the society we now find ourselves in. If you were the truest version of yourself, you’re going to get into a lot of trouble quickly. It’s very typical of men to feel powerful emotions — grief or what have you — and then it turns into anger. Why? Because anger is an easier feeling to deal with and live inside of. When we started the TV series I thought that the Punisher is a guy who just stays mad because he does not want to feel sad, to confront his grief.

Season 2 of the show is about him realizing that even though all the people who killed his wife and his child are dead he is still looking for a fight because that is the place where he is happiest and finds the most peace. This is, again, the core conflict of the character.

Jon Bernthal is perfect as Frank Castle. Bernthal really is the Punisher. He has this energy that would be perfect in a classic Peckinpah film such as "The Wild Bunch" or one of my other favorites, "The Killer Elite." Bernthal's habitus on screen is also like that of Charles Bronson. Bernthal's masculine energy and presence are captivating. What does working with Bernthal allow you to do with "The Punisher" TV series? And why is Jon Bernthal the right Punisher for you?

I was very lucky because "Daredevil" Season 2 had already been made when our conversation about "The Punisher" started.  I really wanted to work on "The Punisher" because I just love Jon's work. Like you, I’m also a huge Peckinpah fan

The idea of tortured men out of place in society. No one ever did it better. That has been a big influence for me on the show. And you are absolutely right, Jon would have completely fit in with Peckinpah because as an actor he has incredible physicality and strength. Jon is also not scared to go to dark places.

He doesn’t care about being liked on screen as a character. But on the other hand, Jon is an incredibly decent man and a really great guy. There is decency and dignity and a humanity to Jon that is always there in his depiction of Frank.

When that character is doing the darkest thing, you can always see the cost of it on Jon’s face. I did not have to write that. He didn’t have to constantly explain himself because it just came out and in many ways, that’s what allows us to really push what "Frank" does in the TV show because the soul that Jon has always pulls the audience back.

The Punisher has an amazing rogues' gallery to choose from. How did you decide to feature the character Jigsaw for season two of the TV series?

I really like the idea that we told a tragic story about two brothers who became mortal enemies. These are two guys who know each other so well. But this one act of betrayal sends them down a different path. It was always going to be Jigsaw from pretty early on because I inherited the backstory of the military conspiracy from "Daredevil" season 2. It just made sense then to make him the guy that Frank served with and everything about the story developed from there.

The fun of season 2 for me was that Jigsaw thinks he is the injured party when in reality it is the opposite. He is the one who thinks that Frank, his brother-in-arms, betrayed him. I enjoyed flipping that scenario around.

Any character who gets up in the morning and thinks "I’m doing to be evil today" is not much fun to write. It’s a great writing rule to say that the villain is the hero of their own story. If you write from that point of view, then the characters are just a lot more interesting.