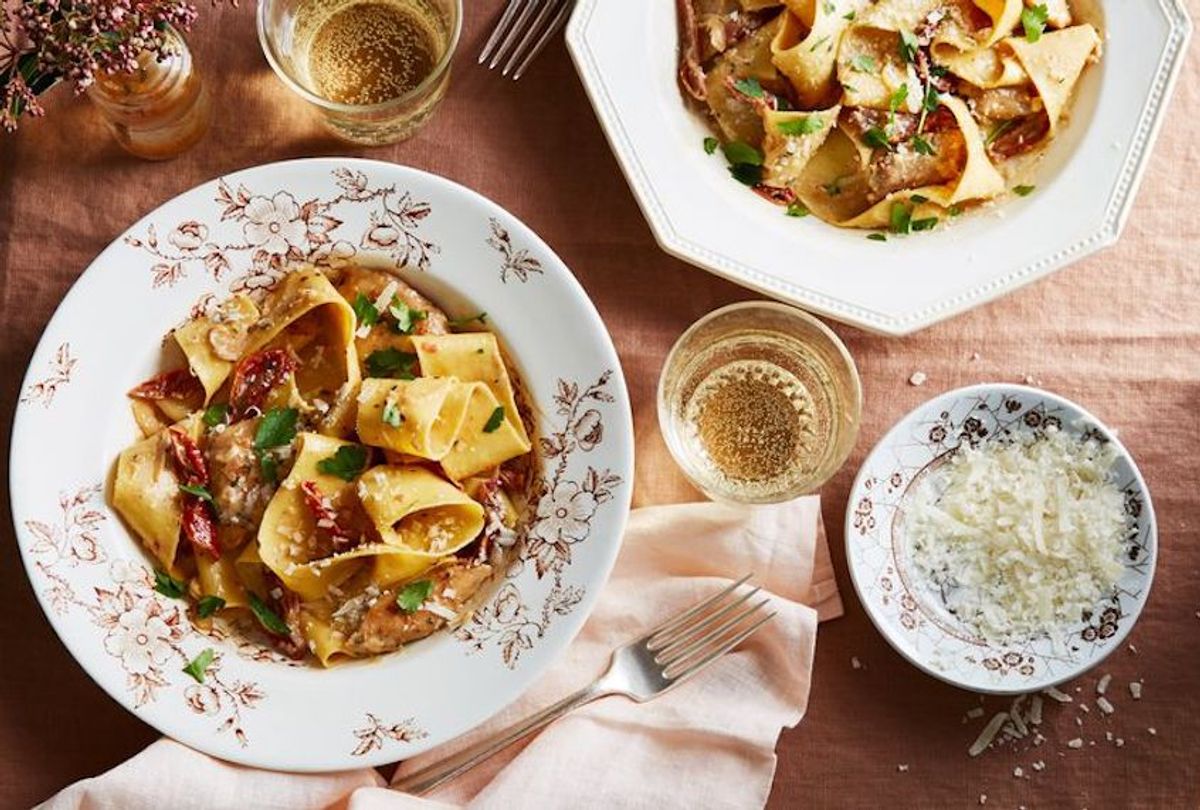 Whether it’s a first date or 47th anniversary, it’s hard to separate romance from food. In With Love & Red Sauce, we’re exploring the ways these two interact—from newlyweds learning to compromise over dinner to celebrating your longest relationship (with noodles!).

It was my husband Jeff’s birthday. It was also a Monday night, and we’d been snowed in for the past few days. This meant two things: First, for dinner, we needed to make do with what we had on hand. Second, I had not one birthday present for him, so that dinner had better be special.

As the evening crept closer, I asked him what he’d like for his birthday meal, rattling off as many ideas as I could. For some reason, I mentioned chicken with cream sauce, even though I didn’t have a clear dish in mind.

Jeff stopped me. “That sounds good! Would you make that?”

Surprised, I questioned him, rapid-fire. “Are you sure you don’t want roast chicken? Or I could make some sort of sheet-pan dinner, or…” But he stopped me. He wanted the chicken with cream sauce.

Jeff recalled the creamy chicken fricassee his grandma made when he was growing up in Nebraska. The two of us had recreated this dish years ago in our first apartment, back when we’d embark upon ambitious dinners from cheffy cookbooks or Gourmet magazine on weeknights, starting at about the same time as our kids now go to bed. We taught ourselves how to cook this way, standing side-by-side in that cramped but charming-to-us kitchen.

But I can’t tell you the last time I’d made a real, honest-to-goodness cream sauce. It's simple and comforting, and a delicious throwback to our Midwestern childhoods, where cream sauces and pan-fried steaks, pork chops, and chicken cutlets were weeknight staples. Now was the time, we decided, to make cream sauce part of our regular weeknight rotation.

Inspired, I got out a big skillet and made the most luxe dish I could imagine, with the simple ingredients we had at home. Using a few tricks from the one-skillet chicken dishes I’ve made in the past, I began by browning some chicken thighs in an anchovy compound butter and setting them aside.

In the same skillet, I sautéed shallots and sun-dried tomatoes. To this mixture I added chicken stock and heavy cream, let the sauce simmer until it thickened, then zested and juiced a big lemon directly over the skillet. I then remembered the half-used bag of pappardelle in the pantry. I wagered it’d hold on nicely to the cream sauce and add some heft to the dish.

The whole thing came together quickly: I tossed the pappardelle with the chicken and cream sauce, showered it with lots of Parmesan, and brought it to the table on a big platter. We unearthed a nicer-than-normal bottle of wine from the basement and dug into dinner.

Jeff liked this impromptu birthday dinner more than anything I’ve made in a long time. And surprisingly, I did, too. The cream sauce was rich but still light—deeply savory from the anchovies, and bright and lively from the lemon and sun-dried tomatoes. Together with the golden-brown chicken and hearty, chewy noodles, the dish completely hit the spot. The two of us came back for seconds, and so did the kids.

While we were clearing the table, Jeff told me how happy and loved this dinner made him feel. He appreciated the fact that I created a dish solely and expressly for him, one that struck a nostalgic chord and made his birthday special in a simple — but very meaningful—  way.

Since that snowy Monday evening in January, I’ve cooked this dish several more times, making good on our resolution to bring back cream sauce. I’ve switched out the sun-dried tomatoes with frozen green peas, I’ve rubbed the chicken with spices, and I’ve changed up the pasta shapes, too.

But this original version, which I’ve come to think of as my husband’s birthday pasta, is our favorite.

Pappardelle with Chicken and Lemon-Anchovy Cream Sauce
Serves: 4 to 6
Ingredients