College basketball players are worth billions to the NCAA. They deserve to be paid

Duke University's Coach K makes $8.9 million to guide a team of unpaid players who assume all the physical risk 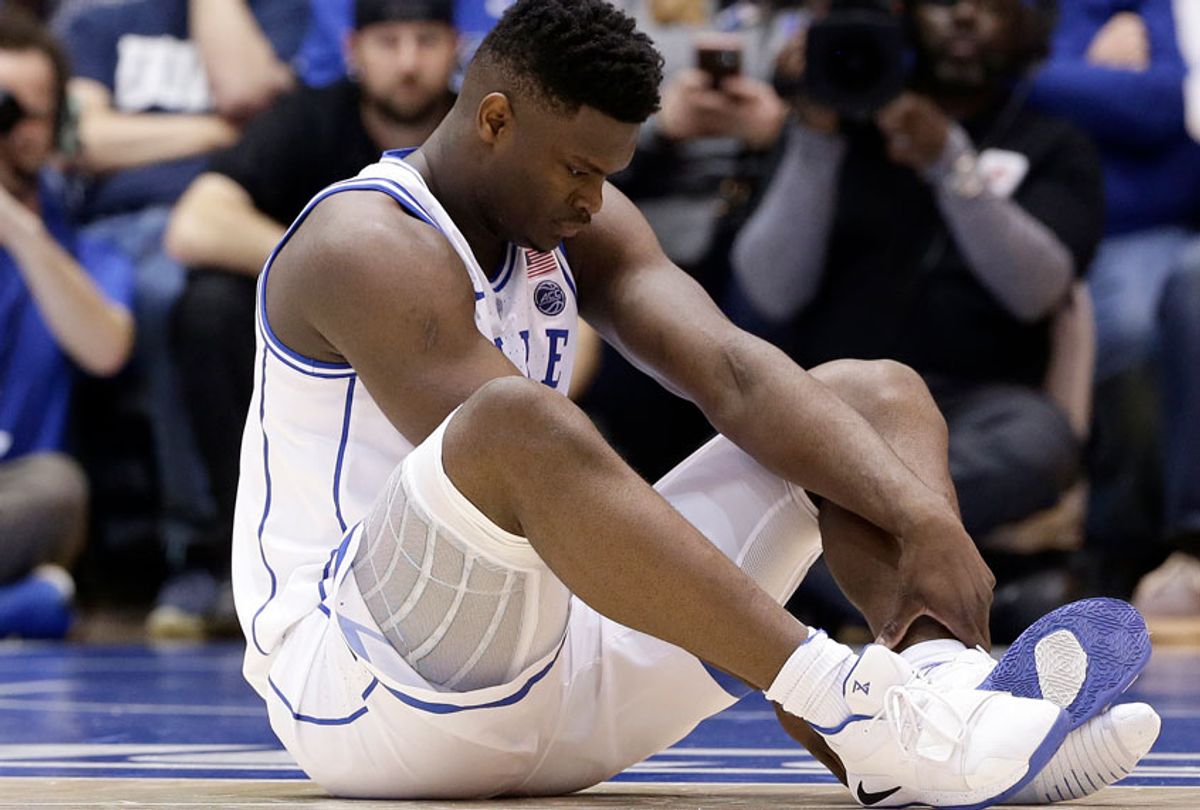 Duke's Zion Williamson sits on the floor following a injury during the first half of an NCAA college basketball game against North Carolina in Durham, N.C., Wednesday, Feb. 20, 2019. (AP/Gerry Broome)
--

Durham, North Carolina. Cameron Indoor Stadium was the place to be on Wednesday night if you love the game of basketball. Packed wall to wall with students, alumni and fans — even Barack Obama was in the building — resale ticket prices surged past $3,000 to see the #1 Duke University Blue Devils face off in a legendary bout against their longtime rivals and #8 team, the University of North Carolina Tarheels.

The big story of the night, however, was Blue Devils 6-foot-7, 285-pound freshman sensation Zion Williamson, as he went into the game favored by many to be the #1 pick in the NBA draft later this year. Williamson dazzles on the court, usually looking like a  healthy man playing against starving boys, averaging an easy 21 points and 8 rebounds. He’s clearly the biggest star in college basketball at the moment. Dude could’ve gone pro straight out of high school, if the NBA didn’t prohibit such a move in the collective bargaining agreement of 2006.

So here he is playing his freshman year at Duke, and with screams echoing throughout the building,  just 36 seconds into the rival face-off that everyone's watching, Williamson gets the ball and goes to into a spin move. He pivots and his Nike shoe explodes. He falls to the floor, gripping his knee.

The team doctor diagnosed it as a mild sprain. Williamson did not return to the game. The Blue Devils lost 88-72.

With the internet being the internet, memes immediately spread making fun of Williamson and his fragile Nike shoe, prompting the athletic corporation to release this statement: "We are obviously concerned and want to wish Zion a speedy recovery. The quality and performance of our products are of utmost importance. While this is an isolated occurrence, we are working to identify the issue."

Williamson has a big name right now, along with the potential to become the next LeBron. Nike could make things right by him and offer him a huge shoe deal, or a lifetime supply of shoes for him and his family, once he's out of the NCAA and able to accept such an offer. But what about Duke? Will any NCAA schools even come close to being held accountable for player injuries? Absolutely not.

Williamson, like many other NCAA athletes, attends Duke on an athletic scholarship. That means his classes are paid for, but he receives no compensation for the work that allows Duke to make millions of dollars off his work, his jersey sales and his likeness, not to mention no piece of the $10.8 billion March Madness contract the NCAA and CBS/Turner has through 2032 that allows fans to watch his tournament games, if he's able to come back and finish playing. He's not allowed to have a job, or strike his own side deals, because being a student-athlete is his job, even though it comes without a paycheck.

Williamson's future is bright in professional basketball — if he can make it through this year and get signed by a team before he blows his knee out on the court, which could have easily happened last night. Then his career would be over before it starts. Sure, Coach Mike Krzyzewski would be sad. But he gets paid $8.89 million a year. How can a coach yelling plays from the sideline get close to $9 million a year, while the dudes on the court get nothing but free classes that they don’t have time to attend because of their rigorous training and traveling schedule?

Imagine if every student who received a full academic scholarship to any university had to agree not to earn money while they were enrolled. Oh, you designed the next Facebook? Sorry, you can't sell that. It would hardly seem fair, and students without rich parents would absolutely suffer. Here's an ironic thought: One of Williamson's classmates could have re-sold a ticket to Wednesday's game for an astronomical profit — this probably did happen — and they would have made more from that game than the players doing the work.

Even as a freshman, Williamson has done more than enough for Duke University at this point. He’s proven himself to the NBA, too. Maybe he should sit out the rest of year, just to make sure his future is safe from future blow-outs.