If Jussie Smollett is a hoaxster, what do we call Donald Trump?

Jussie Smollett and Donald Trump both pushed race-baiting hoaxes, but only one is facing real consequences 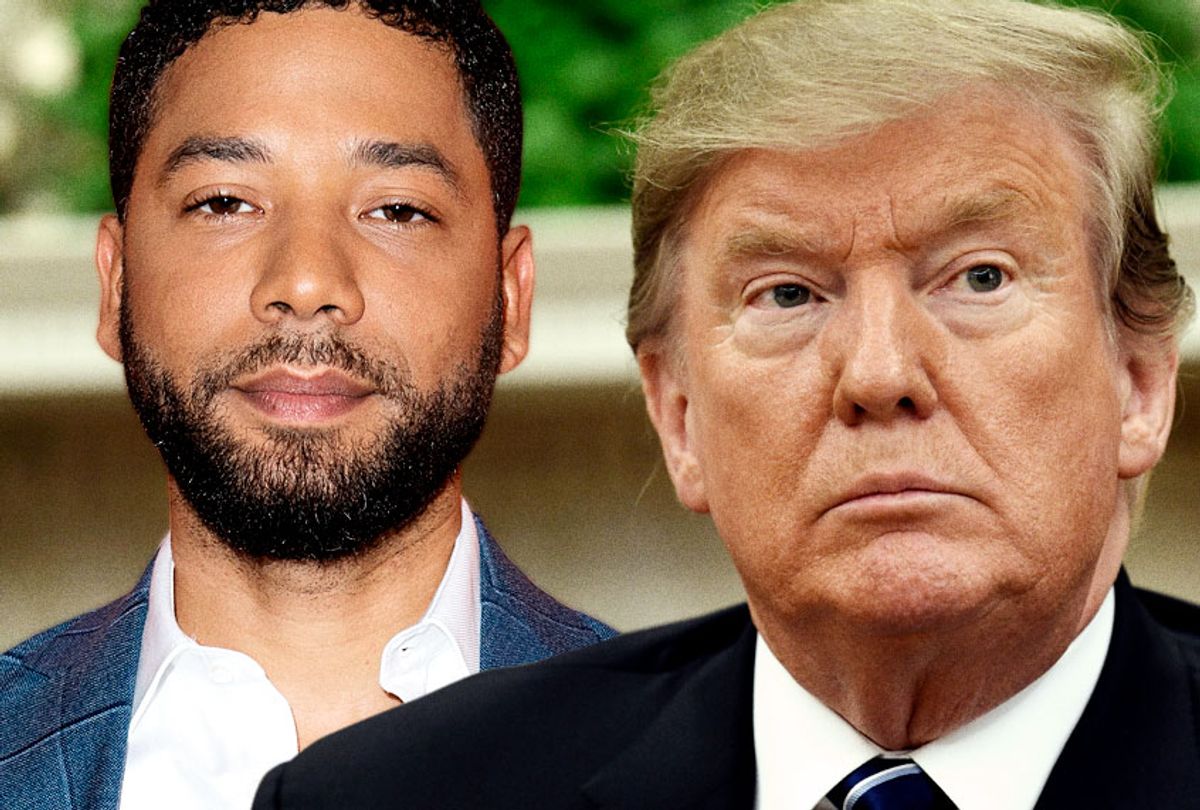 Because the demon god controlling our current reality lacks in subtlety, the news cycle of the past month has been dominated by two hoaxes that play heavily on racial and sexual fears in modern American life. Thursday, Chicago police announced the arrest of actor Jussie Smollett, accusing him of faking an assault against himself in late January, when the "Empire" star claimed two men shouting Trump's "MAGA" slogan and racist and homophobic slurs attacked him.

This hoax follows on the heels of the latest development in a long-running hoax concocted by Donald Trump. For years now, Trump has been spinning an elaborate hoax meant to trick the public — at least conservative voters — into believing there's an "invasion" at the southern border, and only a "wall" can stop it. Last week, after Congress declined to participate in the hoax by giving Trump money for the wall, Trump, desperate to keep the hoax going, declared a "national emergency" and moved to re-appropriate funds to build his wall.

Both hoaxes play off racialized and sexualized fears of violence. Smollett seems to have been banking on the all too real danger of assault that queer people of color face, especially in an age when hate crimes are on the rise. Trump, in perpetuating his "invasion" hoax, frequently tells lurid , false stories of Mexican men "grabbing women" and "taping them up, wrapping tape around their mouths" in order to sell them to rapists, which plugs into a long-standing history of racist fear-mongering about rape to justify hatred of those perceived by white people as "other."

Beyond these surface similarities, these hoaxes diverge sharply. Smollett is facing swift justice for his role in the alleged hoax, as evidenced by his arrest this week. Trump, however, remains safe from any serious consequences for his hoax and, in fact, is using this hoax to gain political power.

Equally troubling is the different impacts of these hoaxes.

Smollett's main victims are the people who publicly expressed sympathy and are now being shamed for it by right wingers who are exploiting this to discredit credible allegations of hate crimes. But there hasn't been any material harm, outside of wasting police resources.

Trump's hoax, on the other hand, has a body count. In October, a man who blamed Jews for the  "invasion" opened fire on a Pittsburg synagogue, killing 11 people. That's the most prominent incident, but there has been a steady drumbeat of domestic terrorism in recent months that feeds off Trump and his allies in places like Fox News hyping the "invasion" hoax. Just last week, the FBI arrested a Coast Guard lieutenant who had been planning a major terrorist attack,  because of his belief that the "white homeland" is being taken from him.

All hoaxes are bad, especially those that play off hot button issues like race or sex. But the fact that Smollett ended up in custody while Trump kicks it in the Oval Office illustrates that our society does not, in fact, sincerely regard all hoaxes as bad. On the contrary, people who perpetuate racist and sexist hoaxes often get handsomely rewarded for it and their hoaxes are often not even talked about as hoaxes.

Required reading on this topic should be Kevin Young's 2017 book "Bunk: The Rise of Hoaxes, Humbug, Plagiarists, Phonies, Post-Facts, and Fake News", which is propelled by Young's insight into how hoaxsters have long plugged into highly emotional issues — he focuses on race, but also addresses some hoaxes that exploited feelings about class or sexuality — to perpetuate their frauds.

In the 19th century, it was P.T. Barnum parading around an elderly black woman he'd illegally enslaved, trying to pass her off as George Washington's nursemaid. In the 21st century, we see right wingers — and Russian intelligence services — blanketing social media with hoaxes meant to stir up racist anger.

"It's not an accident that the [social media] bots from the last election were racialized or fake radicals, fake black groups," Young told Salon writer Melanie MacFarland in 2017. "All this kind of stuff, I’m sad to say, is very much in the tradition of the hoax."

The fake "invasion" at the border isn't even the first racist hoax that Trump has participated in. During Barack Obama's presidency, Trump changed his persona from a reality TV star to a political figure by hyping the "birther" hoax, a conspiracy theory accusing  Obama of faking his citizenship in order to run for president.

Trump's reliance on racist hoaxes isn't even surprising, really. His entire career was more flimflam than reality, including his stint pretending to be a successful businessman on "The Apprentice." Becoming a reactionary hoaxster exploiting American racism was just an extension of this.

This element of surprise, I'd argue, is one of the reasons the Smollett story is garnering so much media coverage and outrage.

Right wing hoaxes are a dime a dozen. For example, Hillary Clinton's campaign was sunk by series of heavily publicized hoaxes, from claims that she was dying to claims that her "emails" were somehow evidence of criminal behavior. But hoaxes that play off the sympathies and concerns of those on the left are genuinely rare, and so they stick out more and are identified more readily as hoaxes, instead of shrugged off as politics-as-usual.

In addition, progressives are "supposed" to be better than this — more honest, more concerned with reality and truth — and so left-leaning hoaxes are treated as moral outrages. No one expects better than hoaxes from the right, so right wing hoaxes tend to be received with more indifference.

There have been a few prominent rape hoaxes in the past few decades that played off progressive concerns about racial and gender justice: The Tawana Brawley case, the Duke lacrosse case, and the infamous Rolling Stone article that forefronted a gang rape story that turned out to be a hoax. (Though all the other rape cases in it were real enough.) In each of these cases, there were serious consequences leveled, such as Rolling Stone facing heavy lawsuit penalties and the district attorney in the Duke case losing his career, and widespread condemnation of each hoax from both the left and the right.

With Pizzagate, hoaxsters — and some people who may have been true believers — rapidly spread a story online accusing Clinton and her campaign head John Podesta of being involved in a child sex ring run out of a prominent D.C. pizza shop. The hoax, fed by media personalities like Alex Jones, eventually led to an act of violence, when a disturbed young man held the pizza shop hostage with a gun. But while that young man received a four-year sentence, the people who created and perpetuated the hoax have faced no real consequences for their involvement in inspiring his violence.

Similarly, as my colleague Rachel Leah reminded me,  Jack Burkman and Jacob Wohl held a press conference in November claiming that Mueller was a rapist and tried to shore up this hoax with documents falsified to look official. It's the sort of presentation that, if self-identified feminists had done it, would have been an earth-shattering scandal used to discredit the entire feminist movement for decades. But, in this case, it was treated like a joke by reporters and the hoaxsters faced no serious consequences, besides being laughed at.

Part of the reason for this double standard is that men like Burkman and Wohl are part of what you might call the hoax-industrial complex, a massive right wing undertaking led by outlets like Jones' InfoWars and Gateway Pundit (which published the Mueller claims), geared toward blanketing the nation with conspiracy theories and hoaxes to distort the political landscape. Because most serious people, including journalists, know these people are a pack of clowns who lie for a living, it simply feels much different than alleged hoaxes like Smollett's, which captured the sincere attention of smart people and can therefore felt like more of a violation.

There is no excuse, of course, for hoaxes. Smollett's alleged hoax did real damage, by handing a weapon over to conservatives eager to discredit legitimate allegations of hate crimes. If he's guilty, Smollett deserves punishment.

Smollett's case as a media phenomenon, however, is interesting mostly for its novelty.  Most hate crimes are real enough, as the survivors of the Pittsburgh synagogue shooting can tell you. That's why it's unfair for people like Ramesh Ponnuru of National Review to say that the Smollett case is indicative of "a lot of credulity, especially among liberals."

In truth, what Smollett alleged is a pittance compared to much of the all-too-real right wing violence in recent years, from the horrific 2015 church shooting in Charleston to the white supremacist running down a crowd of anti-racist protesters in Charlottesville in 2017 to a fervent Trump supporter attempting murder by bomb in 2018 of Clinton, Obama and other prominent targets of Trump's hatred. In light of those stories, it's easy to see why people believed Smollett's.

The question now that Smollett is facing justice is what to do about hoaxes that are less novel — such as Trump's "border invasion" hoax — and continue to be perpetrated with no consequences for the sources, despite the real damage and violence that results. Can we even start to recognize these right wing hoaxes for what they are, or will they still be disguised with euphemisms such as "misleading"? Smollett's career is likely over, and he may even see the inside of a prison cell. Will we ever be able to say the same about Trump, whose hoaxes have been going on longer and have done more damage?