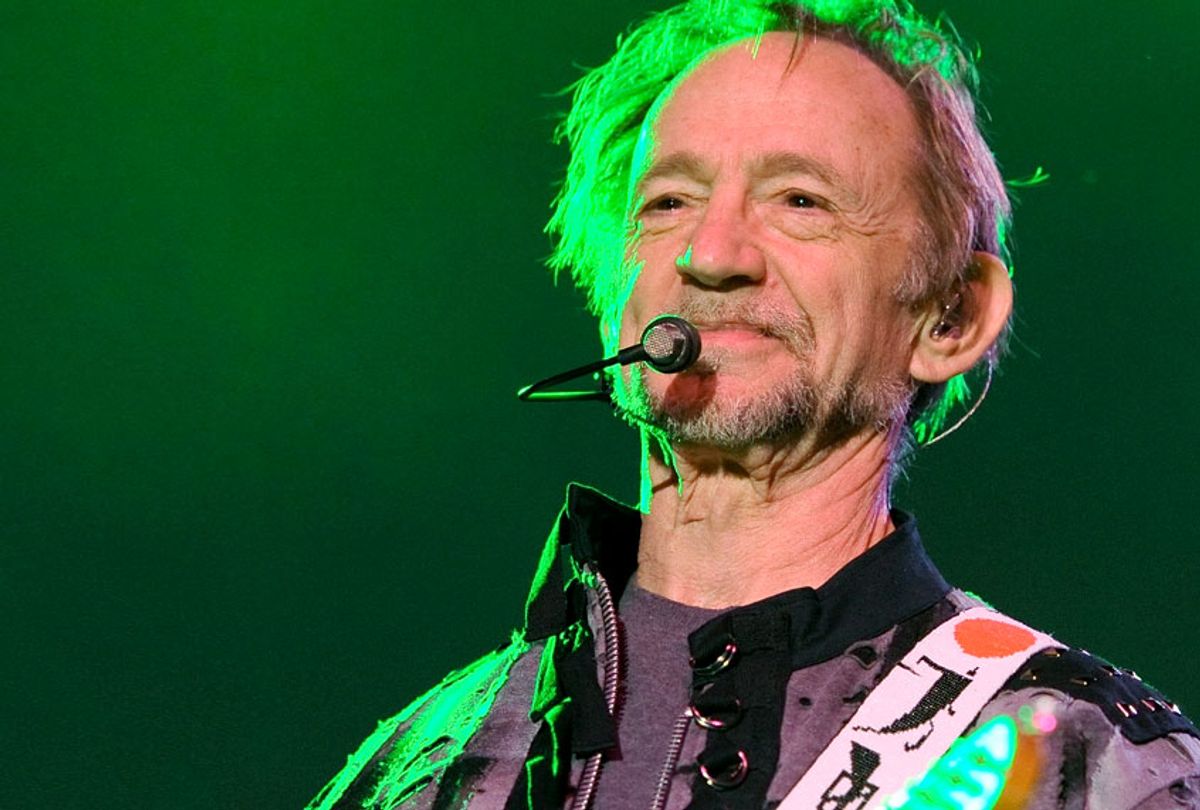 Monkees bassist and singer Peter Tork, who played with the group from their earliest days as a made-for-TV band in the Sixites through their recent reunion tours, died Thursday of unknown causes. He was 77. Tork’s sister, Anne Thorkelson confirmed the affable musician’s death to The Washington Post.

“I am told he slipped away peacefully,” his Monkee bandmate Michael Nesmith said in a statement. “Yet, as I write this my tears are awash, and my heart is broken. Even though I am clinging to the idea that we all continue, the pain that attends these passings has no cure.”

Tork played a lovable dimwit on the Monkees TV show, but in real life, he was an accomplished songwriter and guitarist/bassist that played on many of their key recordings and wrote numerous songs for the group, including “Can You Dig It?” and “For Pete’s Sake.” “I was hired to be an actor on a TV show,” he told Rolling Stone in 2016. “The producers did have hopes that something musical would come out of us when they cast the four of us. But if we couldn’t have done the music, they would have been alright with us just making the TV show.”

That’s not how it happened, though. Contrary to the persistent belief that the Monkees didn’t play their own instruments, Tork played guitar and bass on their earliest recordings – including “Papa Gene’s Blues” and “Sweet Young Thing” – even though Monkees music supervisor Don Kirshner would have preferred to leave everything completely in the hands of session pros. “I never objected to Kirshner’s song-picking abilities,” Tork told Rolling Stone in 2012. “It was obvious he knew how to pick a hit. All I wanted to do was be the musician in the studio. I wanted to be the sideman on my own album.”

Tork grew up in Connecticut and was a part of the early Sixties Greenwich Village folk scene, where he befriended a pre-fame Stephen Stills. Once they both moved to Los Angeles, Stills told Tork about a TV show looking to cast a Beatles-like band. “I remember Stephen saying to me, ‘They like me but they think my hair and teeth won’t work for television,'” Stills told Rolling Stone in 2011. “I said, ‘Yeah, yeah, thanks Stephen’ and hung up without any intention of going to the audition. He called me again and said, ‘No, no, you really have to do this.’ I never would have gone had it not been for Stephen.”

He was cast on the show along with Micky Dolenz, Michael Nesmith and Davy Jones. The Monkees was an enormous hit from the moment it hit the airwaves in September 1966 and it helped send early singles like “Last Train to Clarksville” and “I’m a Believer” up the charts. Almost overnight, Tork and his bandmates were huge celebrities stalked by screaming fans.

“Once in Cleveland we strayed from our bodyguards into the plaza where a train station, or some public transport hub, was letting out thousands of fans for the concert we were on the way to give,” Nesmith told Rolling Stone in 2012. “They spotted David and the chase was on. We were like the rabbit – fleeing in blind panic. We saw a police car and jumped in the back seat, blip, blip, blip, blip, – squashed together shoulder to shoulder in our concert duds, and slammed the door just as the tsunami of pink arms closed over the car’s windows.”

After two albums where they had minimal influence over the group’s music, Tork and the rest of the group seized control and recorded Headquarters largely by themselves. It reached Number One on the Billboard charts in May 1967, though just a week later it was knocked out by the release of Sgt. Pepper’s Lonely Hearts Club Band. This was the pinnacle of the Summer of Love, and unlike many of his more straight-laced bandmates, Tork reveled in the excesses of the era. His mansion in Studio City, on the north side of Laurel Canyon, became a gathering place for the likes of Jimi Hendrix, David Crosby, Mama Cass Elliott, Judy Collins and David Crosby.

Unlike his friends, Tork was never taken seriously by rock critics since his group began on TV and appealed to young kids. Shortly after the release of their psychedelic movie Head in 1968, Tork quit the band, citing exhaustion. It was the beginning of a rough chapter of his life where he faced major financial problems and limited career options. In 1972, he served four months in a federal prison after being caught with hashish. Four years later, however, he bounced back and became a teacher at Pacific Hills High School in Santa Monica, California.

Nostalgia for the Monkees fueled by MTV putting the old show back on the airwaves in 1986 caused the group (minus Nesmith) to reunite for a series of highly lucrative reunion tours. Tork stayed with them on the oldies circuit until 2001 when he abruptly vanished from a tour. “Honestly enough, I have to say that I kind of lost it myself and bolted towards the end of it,” he told Rolling Stone in 2011. “I ticked off the other guys good and proper. It was a serious mistake on my part. I was not in charge of myself to the best of my ability and I apologized to them.”

In the 2000s, Tork spent much of his time gigging with his side project Shoe Suede Blues. He was diagnosed with the rare tongue cancer adenoid cystic carcinoma in 2009, but he made a full recovery and in 2011 the Monkees made peace with each other and went back on the road for the first time in a decade. Jones died of a sudden heart attack the following year, but Nesmith soon rejoined the band and helped them resume their road work. They recorded the 50th anniversary album Good Times! in 2016 and released their first Christmas album last year. Tork only contributed one song to the collection, and rumors swirled that he was in poor health.

“While it is true that my health has required a little more attention these days, I’m feeling pretty good,” Tork wrote on Facebook in October. “I’m also cherishing this time with family and friends, and making music. Keep your eyes open for some possible web concerts with friends and other musicians; we’ll see what comes down the pipeline. As for the rest, thanks for your good wishes. This is a private time and I won’t be posting updates.”

“I can only pray his songs reach the heights that can lift us and that our childhood lives forever — that special sparkle that was the Monkees,” said Nesmith. “I will miss him — a brother in arms. Take flight my Brother.”