Hey, hey! Ho, ho! Is striking for school nurses the way to go?

These unions follow in the footsteps of Los Angeles teachers, who striked for six days last month 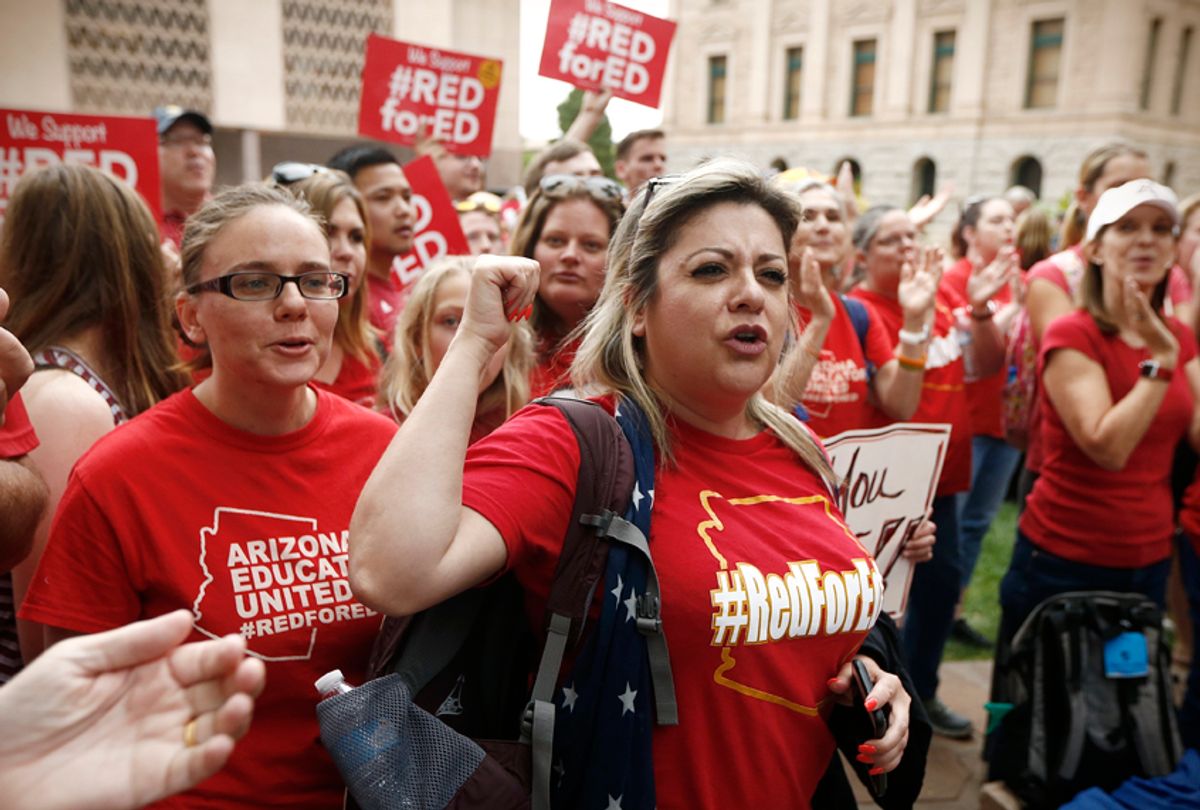 As teachers across the country walk out of their classrooms, hit the picket lines and demand higher pay, they’re keeping school nurses in mind — asking for more of them or, at the very least, better pay for them.

Oakland, Calif., teachers plan to strike Thursday if they can’t hammer out a deal with the district that includes a “living wage” and more nurses and counselors. Last week in Denver, thousands of educators and school nurses went on strike and marched to the state Capitol asking for a significant raise — and got it.

These unions follow in the footsteps of Los Angeles teachers, who, after striking for six days last month, won a 6 percent salary increase and 300 more school nurses over the next three years, enough to staff every school with a full-time nurse.

“It shows that teachers recognize the importance of having a nurse on-site at all times, but it’s sad that it takes a strike to get more nurses,” said Nina Fekaris, president of the National Association of School Nurses and a school nurse in Oregon.

Student health is key to academic success, but when it comes to putting nurses in schools, the education system has often “turned a blind eye,” Fekaris said. Now, teachers are making nurses a critical piece of their contract negotiations in a bold move that seems to be working, she said.

For districts, it comes down to limited funding, said Erika Hoffman, a lobbyist with the California School Boards Association. “You’ve got massive competing interests: Do I hire a new teacher, a counselor or a school nurse?”

School districts do not make these decisions lightly, Hoffman added. “We know healthy kids learn better,” she said. “It’s great that the unions are looking at the needs of the whole child, but [nurses] don’t come for free.”

School nurses make a national average salary of $63,944 to $66,973, according to the latest figures from the National Association of School Nurses. About 55 percent of them earn less than $51,000 a year.

In many school districts across the country, there simply aren’t enough nurses to tend to students’ medical needs. Nurses often split their time among several campuses, leaving many schools without a nurse at critical times and short of the recommended staffing ratio. In some instances, teachers or support staff administer medication when a nurse isn’t around. And in at least one extreme case, when a gun accidentally discharged inside a Los Angeles Unified School District middle school classroom last year, teachers scrambled to figure out how to tend to the injuries before first responders arrived.

Nonetheless, when districts face budget cuts, nurses are among the first staff to go, Fekaris said. That’s because school nurses are not required by law in most states, even though their services, such as vision, hearing and scoliosis screenings, are.

The American Academy of Pediatrics used to recommend a ratio of 1 nurse for every 750 students, but the organization updated its recommendation in 2016 to at least one nurse in every school.

During the 2017-18 school year, California schools employed 2,623 full-time registered nurses, according to the state Department of Education. With about 6.22 million students enrolled, that averages out to about 1 nurse for every 2,370 students.

In West Virginia, teachers went on strike last year and won a 5 percent raise for all staff, including nurses. Now, proposed state legislation would improve the school nurse ratio, which currently stands at 1 nurse to 1,500 students, according to the West Virginia Association of School Nurses.

“Our parents really wanted more nurses, and it became one of our top demands,” said Arlene Inouye, secretary of United Teachers Los Angeles.

After the strike, Inouye visited Oakland to advise that city’s teachers union, which announced Sunday that it will strike this week, barring “dramatic changes” from the district.

“L.A. has been an inspiration,” said Chaz Garcia, a vice president of the Oakland Education Association. “There has been a lot of focus on salaries, but that’s not the driving force and that’s not all we’re looking for,” she said.

The union is asking for 1 school nurse for every 750 students “because we do not have enough to deal with students’ growing health issues,” she said. School nurses and teachers in the district are seeing more students with chronic conditions such as asthma, diabetes and food allergies — which require constant monitoring and the administration of medications such as insulin.

The district, which has about 37,000 students, budgets for 32 nurses, but seven of those positions are vacant, she said.

“Like many other California districts, we have struggled to find qualified candidates to fill our vacancies,” Bustamante said in a written statement. She cited obstacles including the additional state certification required to become a school nurse and competition from hospitals.

What school districts really need to do if they want to attract more nurses is offer them a “living wage,” said Sean McFarland, a school nurse at Denver Public Schools who participated in the strike there.

Before working in schools, McFarland was a charge nurse in an emergency room, where he made about $16,000 more a year than his starting salary at the school district, he said. He took the pay cut because he wanted to try nursing in another setting and give back to his community in a different way, he said.

When he started, he befriended four other new nurses. “Out of the five of us, I am the only one who still works” at the district, McFarland said. “They left for more pay.”