2019 Oscars finally did the right thing by Spike Lee

A Spike Lee Joint finally won an Academy Award. But "BlackKklansman" should have been Lee's fourth Oscar winner 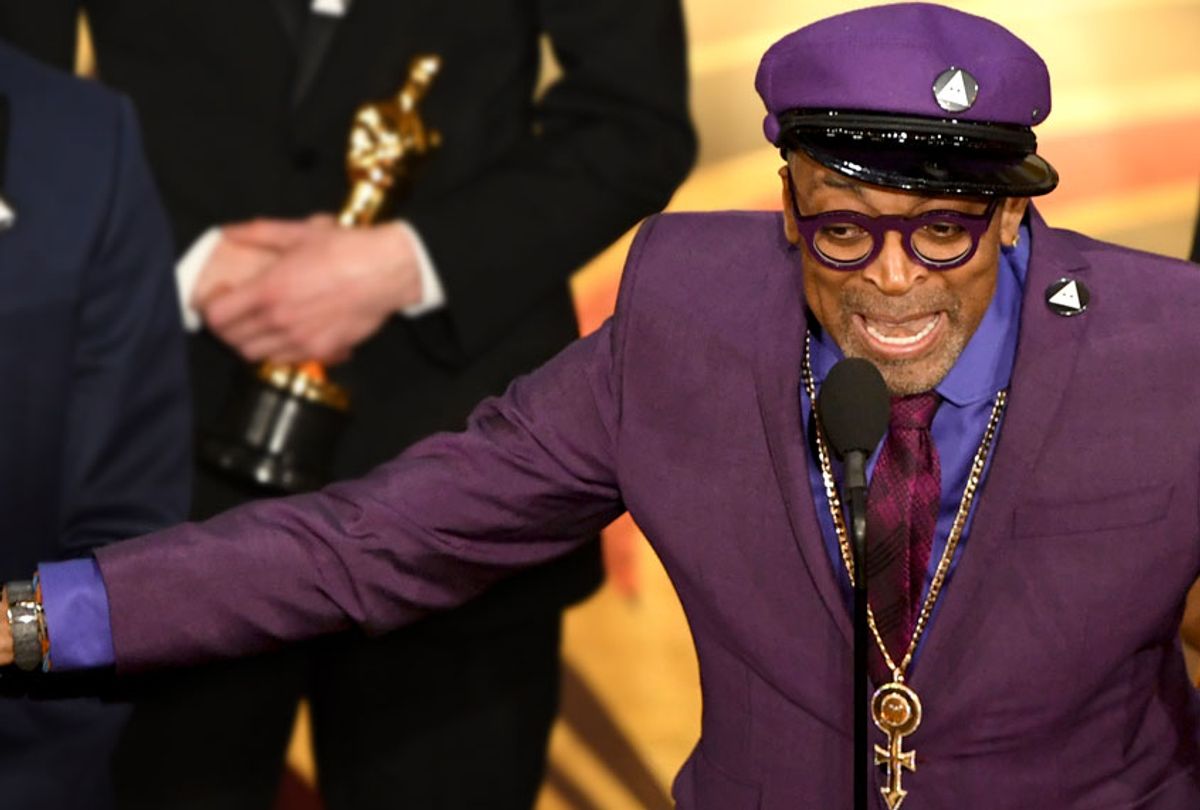 Spike Lee won his first Oscar last night in the category of Best Adapted Screenplay for his 2018 film "BlacKkKlansman," sharing the award with Charlie Wachtel, David Rabinowitz and Kevin Willmott.

Previously nominated for Best Original Screenplay for "Do the Right Thing" (1989) and Best Documentary for "Four Little Girls" (1997), the 61-year-old filmmaker received an honorary Oscar in 2015. But none of these moments compare to seeing Spike charge the stage to accept his statue for the competitive Adapted Screenplay category in his purple suit, Price necklace, and custom Oscar-gold Jordans, then leap into the arms of Samuel Jackson, the main dude that has been rocking with Spike’s films since "Do the Right Thing."

Lee then took the mic, and encouraged the Oscar producers to ditch the clock as he was determined to get through his entire speech:

“Four hundred years. Our ancestors were stolen from Mother Africa and bought to Jamestown, Virginia, enslaved. Our ancestors worked the land from can’t see in the morning to can’t see at night. My grandmother, [inaudible], who lived to be 100 years young, who was a Spelman College graduate even though her mother was a slave. My grandmother who saved 50 years of social security checks to put her first grandchild — she called me Spikie-poo — she put me through Morehouse College and N.Y.U. grad film. N.Y.U.!

Before the world tonight, I give praise to our ancestors who have built this country into what it is today along with the genocide of its native people. We all connect with our ancestors. We will have love and wisdom regained, we will regain our humanity. It will be a powerful moment. The 2020 presidential election is around the corner. Let’s all mobilize. Let’s all be on the right side of history. Make the moral choice between love versus hate. Let’s do the right thing! You know I had to get that in there.”

Spike Lee's win last night was huge for the culture, especially for us black millennials as he introduced us to the idea that we too could be represented in film.

Obviously, we all know that decades of black films existed before Spike even thought about picking up a camera. I'll always acknowledge the greats, like Gordon Parks, Ossie Davis and Melvin Van Peebles, as they inspired Lee, but they put on for their generation back in the day, with the Afros and platform shoes. Lee stepped up for ours in a way that no director ever has.

Truth be told, Spike Lee should have won an Oscar years ago; he’s a pioneer who has long operated outside of trends and what’s popular in a way that inspired the industry, pissed off the establishment, and birthed a generation of new directors into a world where demanding freedom in an unapologetic way was, thanks to his work, not just cool but necessary.

"BlacKkKlansman" is a dope film — its nominations for Best Director for Lee, Best Supporting Actor for Adam Driver and Best Picture, along with nods for Best Score and Best Editing, all well deserved — but it should’ve been Lee's fourth Oscar-winning film, not his first. His third should’ve been "Four Little Girls" — that documentary, which remains socially relevant, has changed my life, and I along with a host of professors all over the world teach it frequently. "The Long Way Home," the film that took home the Oscar forBest Documentary Feature that year, was a great film, but "Four Little Girls" was stronger and more informative, and we all see how it has stood the test of time.

Lee's second Oscar winner should have been "Malcolm X," the best biopic ever. "Malcom X" snagging awards for Best Picture and Best Director should’ve been a no-brainer. Star Denzel Washington, nominated for Best Actor, was also robbed when Al Pacino won for "Scent of a Woman." Indeed, no film nor performance came even close to "Malcolm X" in quality that year — and yes, I watched every nominated film in those categories as an adult because I'm still offended by its loss. Nevertheless, the Hollywood champion of racism denial, Mr. "Grand Torino" himself, Clint Eastwood — the man who proudly told Esquire that Trump “is onto something, because secretly everybody's getting tired of political correctness, kissing up. That's the kiss-ass generation we're in right now. We're really in a pu**y generation. Everybody's walking on eggshells. We see people accusing people of being racist and all kinds of stuff. When I grew up, those things weren't called racist” — won both categories for "Unforgiven" instead, a movie that has lost all relevance and you couldn’t pay me to re-watch.

Lee’s first Oscar winning film, of course, should’ve been "Do the Right Thing."

I didn’t catch the film in theaters when in dropped in 1989, but rather at my homie  Fat Tay’s crib — he liked to debut bootleg films for us, and dude had the best collection in the whole of east Baltimore. Fat Tay was buzzing about the film's intro all day, so a pack of us piled up in his unit in front of a bubbly 32-inch that sat on top of a broken 32-inch. Some of us were on the couch, some on the floor, and a few decorated the wall, all ashy and anxious, waiting for Tay to pop the VHS in. “You ain’t never seen nothing like this!” Tay said.

Lost in the excitement, none of us realized that his power was off again — but that wasn’t an issue, because Tay’s uncle Git ran a mile-long extension cord into their neighbor’s house. Git gave us the OK, Tay flicked the switch, and our adolescent eyes bugged as we all drooled over an amped-up Rosie Perez in low-def bouncing across the screen, all claiming that we would marry her when we grew up, as if she date the kind of guys who bootlegged her debut.

The colors! I remember being drunk on the colors that were so familiar to me and my home, just like the fashion, the language, the slang, and how Lee captured the complete picture of his Brooklyn. From the knuckleheads to the Air Jordans to the annoying cops to the rowdy teens to the trash-talking old heads to the black-people-exploiters to the neighborhood drunk, Lee showed it all with a high dose of humanity. We felt every character. It was magic on the screen — it still is magic on the screen. I still watch "Do the Right Thing" at least three times a year, as it is still one of the most referenced films in our culture. Lee was nominated for Best Original Screenplay for that film, but lost to "Dead Poets Society," a film I also loved in a different way. "Do the Right Thing" should’ve been nominated for Best Picture that year, too, but it wasn’t. "Driving Miss Daisy" took home the big prize. Once again, no one is still buzzing about that movie at all.

Hollywood finally did the right thing by Spike Lee, decades after he first earned the accolades the Academy wouldn't give his films. Shout out to Spike for an award well deserved, and long overdue.