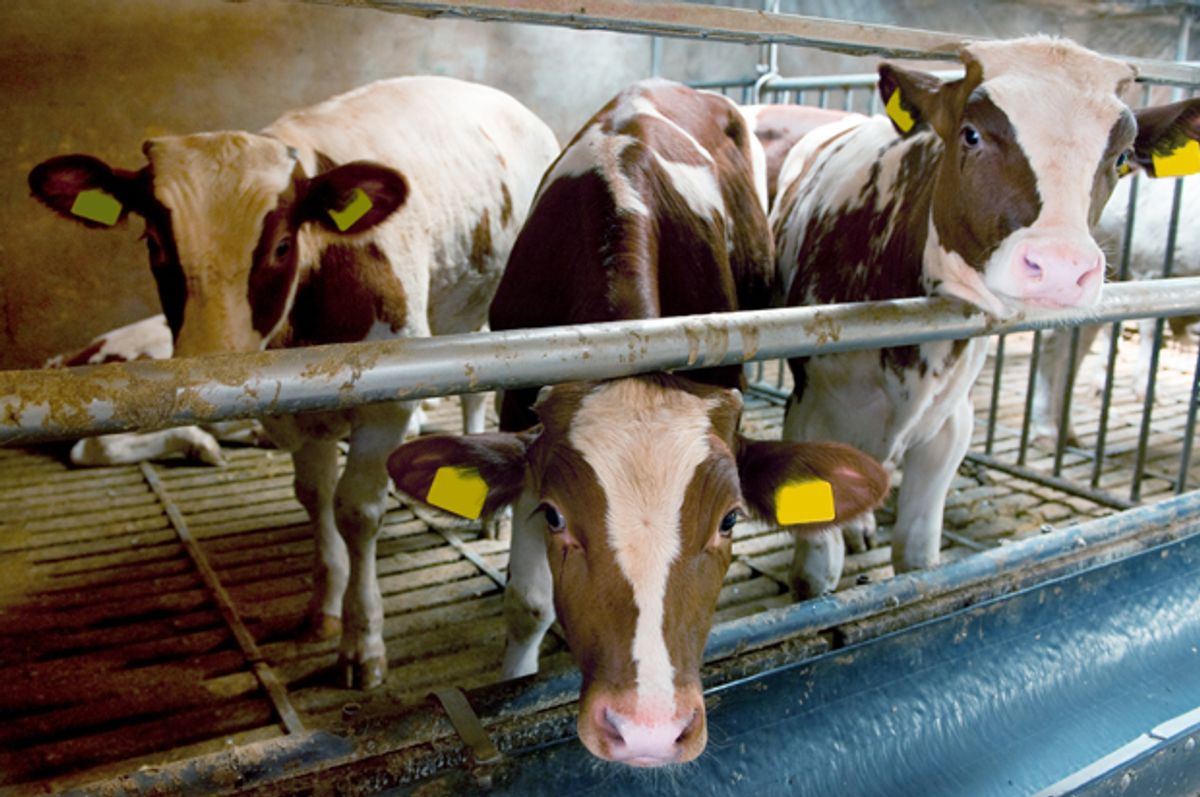 Hurricane Florence, which battered the U.S. East Coast last September, left a trail of ruin and destruction estimated to cost between $17 billion and $22 billion. Some of the damage was all too visible — smashed homes and livelihoods. But other damage was less so, like the long-term environmental impacts in North Carolina from hog waste that spilled out over large open-air lagoons saturated in the rains.

Hog waste can contain potentially dangerous pathogens, pharmaceuticals and chemicals. According to the state’s Department of Environmental Quality, as of early October, nearly 100 such lagoons were damaged, breached, or were very close to being so, the effluent from which can seep into waterways and drinking water supplies.

Rather than an isolated problem, however, the story of North Carolina’s failure to properly manage its hog waste opens a door to what critics say is a much wider national and global issue: the increasingly extensive and varied impacts on our water resources, air and soils from Concentrated Animal Feeding Operations (CAFOs).

“The big problem with this model is the waste management problem that it creates, generating so much waste in such high concentration,” said Will Hendrick, staff attorney with the Waterkeeper Alliance, a network of organizations monitoring U.S. waterways. “We haven’t really improved the technologies for managing this waste beyond what we were using centuries ago.”

In recent decades, livestock numbers have soared in the U.S., while the number of actual farms has shrunk — a dynamic fueled in part by the government’s acquiescence to industrial farming mega-mergers. In 2015, for example, just four companies accounted for 85 percent of the nation’s beef packing industry. This has given rise to what the Environmental Protection Agency (EPA) calls CAFOs, livestock operations where animals—primarily cows, pigs and chickens — are kept and raised in confined spaces.

The amount of animal feces and urine produced in these facilities is staggering — more than 40 times the waste generated in wastewater treatment plants. Most CAFO waste is spread over farmland as fertilizer. But unlike strictly regulated human waste, the waste generated by CAFOs isn’t held to the same standard and is largely untreated. “The basic legal theory, which is basic legal fiction, is that the waste will be kept on site and applied to adjacent cropland and [will] never enter our water-bodies,” said Hendrick.

What actually happens is that potentially toxic chemicals, drugs and bacteria in untreated animal wastes drain off or leach through the soils, making their way into the nation’s rivers, streams, groundwater and drinking water at alarming rates, directly impacting communities. Iowa’s largest municipal water utility provider, for example, recently sued a number of upstream drainage districts for excessive drinking water nitrate levels caused by farmland runoff. The lawsuit, however, was subsequently dismissed, the judge ruling it a problem for the state legislatures to tackle.

CAFO wastes are regulated to some extent. Under the Clean Water Act, for example, operators must file a nutrient management plan with their state environmental agencies. “Whether spread next to the CAFO or on neighboring fields, that manure spreading is done only after a careful analysis of both the manure itself and the land it’s applied to. There are legal penalties attached to violating those plans,” said Will Rodger, a spokesperson for the American Farm Bureau Federation (AFBF), in an email. The bureau is a powerful lobbying organization that has championed efforts to weaken the Clean Water Act.

Enforcement of these management plans, however, varies from state to state, said Tom Pelton, spokesperson for the Environmental Integrity Project, a nonprofit environmental watchdog. “In reality, there’s not much enforcement, and they’re also difficult to enforce,” he added.

The prevalence of veterinary drug use in industrial farming, and the associated health risks when humans are exposed to these drugs, is another factor that critics highlight. Antibiotics, for example, make their way through the waste-streams at these facilities and out into the environment, leading to fears of increased antibiotic resistance in humans, not to mention their damaging impacts on sensitive ecosystems.

There’s also the question of what to do with excess animal waste when the available agricultural land surrounding CAFOs is limited, leading to oversaturation of soils with animal manure. “There are still some states that have not banned applying this waste on frozen ground,” said Patty Lovera, assistant director at Food and Water Watch, a consumer advocacy organization that has called for an end to factory farms. “That’s not about growing crops. That’s about disposal.”

Despite the fact that the EPA has long known about high levels of CAFO-produced air pollution, the agency is seeking to exempt these facilities from having to report toxic air emissions like ammonia and hydrogen sulfide under a federal right-to-know law, though a group of environmental organizations filed a lawsuit last year to halt that proposed rule.

Air quality issues from industrial farming can also be more locally felt. In North Carolina, for example, neighbors of a hog farm operated by Murphy-Brown filed a lawsuitin 2014 against the owners complaining of nuisance noises and odors, worsening their quality of life. Theirs was one of a number of lawsuits against Smithfield Foods, Murphy-Brown’s parent company. The plaintiffs from that particular suit were recently awarded $473.5 million. But the state legislature also passed a lawlimiting the legal action that residents can now take against neighboring CAFOs.

More animals, of course, means that more crops must be grown to feed them, which leads to broader industrial farming impacts, including runoff from agricultural chemicals like those found in fertilizers, insecticides and herbicides. What kinds of impacts do these chemicals have? A recent studyout of New Zealand finds that certain bacteria develop antibiotic resistance up to 100,000 times faster when exposed to common herbicides like Roundup and Kamba. Agricultural runoff also helps feed harmful algae blooms.

According to an Environmental Working Group (EWG) analysis of data from 2014 and 2015, the drinking water in 1,700 individual systems (affecting approximately 7 million people) contained nitrogen at levels higher than 5 parts per million (ppm), an amount the National Cancer Institute says increases the risk of colon, kidney, ovarian and bladder cancers. The EWG also found that nearly 32,000 Americans received drinking water containing nitrogen at levels exceeding the EPA’s threshold of 10 ppm — a limit set more than 55 years ago.

Nor is it cheap for consumers to filter out chemicals like nitrates themselves, explained Anne Weir Schechinger, EWG’s senior economic analyst. As an example, the Iowan utility tackling elevated drinking water nitrate levels is reportedly spending $15 million to expand its filtration technology. “That’s why we want to make sure our audience has more [information] resources so they can protect themselves if the EPA isn’t going to,” Weir Schechinger said, pointing to EWG’s drinking water database.

The American Farm Bureau Federation disputes EWG’s findings, and points to what it regards as “inadequate evidence of carcinogenicity” in drinking water. “We are not impressed with this effort, nor the quality of EWG’s reports across the board,” said Will Rodger in an email. In response, Weir Schechinger explained how for decades, “peer-reviewed studies have shown a clear link between an increased risk of cancer and nitrate levels in tap water that are lower than EPA’s legal limit—and no amount of lobbying from special interest groups will change the science.”

Indeed, the health risks associated with living in close proximity to CAFOs is becoming increasingly clearer. A recent study out of Duke University found that North Carolinians who live near hog farms have higher death rates from a variety of health issues — including anemia, kidney disease, septicemia, tuberculosis and infant mortality — compared to those who live further away from such facilities. And who are the people most affected? CAFOs disproportionately impact low-income rural communities, African Americans, Latino Americans and Native Americans.

The regulatory framework exists — in federal laws like the Safe Drinking Water Act, the Clean Water Act and the Clean Air Act — to force CAFO operators to properly dispose of their waste, said Sacoby Wilson, associate professor at the University of Maryland’s School of Public Health. The problem is, “They [CAFO operators] have a very strong hook in the legislature,” he said, pointing to the political clout that large agricultural organizations wield. That’s why CAFO operators have for so long circumvented more stringent waste disposal laws, according to Wilson.

But Wilson stressed that in the event CAFOs are held to tougher laws in the future, the costs associated with modernizing these facilities should be absorbed by the large conglomerates driving the CAFO industry, rather than the smaller farm operators, many of whom struggle financially. “In the process of compliance, there would have to be some modifications made to make sure the costs are internalized by the corporations,” said Wilson. “We’re not anti-farmers, we’re pro-farmers. We’re not anti-development, we are pro-sustainable development.”

Experts point to other things that CAFO operators can do to minimize their environmental footprint. Greater use of cover crops would promote healthier soils and reduce erosion. Buffer stripsand terraces — natural devices that intercept pollutants — help reduce nitrogen and phosphorus runoff. But other proposed changes are more controversial. Methane digesters might sound like a good way of transforming methane emissions into renewable energy, but critics pick holes in such technologies, arguing that they do little to nothing to tackle the sheer volume of animal waste generated. More broadly, critics highlight ethical issues inherent in CAFOs, pointing to instances of animal abuse and cramped living conditions.

At the end of the day, though CAFOs are the “dominant model of agriculture,” said Lovera, “we didn’t vote” for this system. “If I could wave the magic wand, everybody would be using different agricultural techniques, but it’s going to take some steps to get us there.”